Pope Francis begins the Curia domino Pope Francis, how important is the narrative? 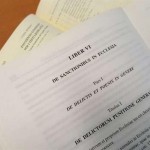 In 2010, Benedict XVI wrote a letter to the Church of Ireland shaken by the case of abuse. And there was a passage in that letter that was enlightening: after the Second Vatican Council – we read – “there was a well-intentioned but misguided tendency to avoid penal approaches to canonically irregular situations.”

In practice, Benedict XVI complained that an approach based entirely on pastoral care and mercy had put aside the sense of justice. Hence, a certain laxity in the choice of candidates for the priesthood (Benedict complained of this in the same letter) and the incorrect measures to counter the abuses that led to the scandals that have shaken, and continue to shake, the Church.

When Benedict XVI wrote these words, the reform of Book VI of the Code of Canon Law had already begun in 2007. The reform was completed after 14 years and presented last June 1 in the Press Office of the Holy See by Archbishop Filippo Iannone, president of the Pontifical Council for Legislative Texts, and by Bishop Juan Ignacio Arrieta, secretary of the Council.

Archbishop Iannone himself pointed out: “In recent years, the relationship of interpenetration between justice and mercy has sometimes undergone an erroneous interpretation, which has fueled a climate of excessive relaxation in the application of criminal law, in the name of an unfounded conflict between pastoral care and law, and criminal law in particular. ”

For this Code, in short, we cannot speak of a “reform of Pope Francis.”

Instead, it is the result of a process that began some time ago, which aims above all to give certainty to justice. The changes are not substantial. Indeed, they are arguably not changes.

However, professional canonists point out that there are at least 57 canons that have remained essentially unchanged. In short, it is a general adjustment, which better specifies the law, which introduces new types of crime, but which at the same time does not substantially change the structure of canon law.

Thus, in the new canons, we find the ex-communication latae sententiae (for having committed the fact) for having procured an abortion. But we also find severe and precise penalties for those who commit abuses. We read in canon 1398: “A cleric who commits a crime against the sixth commandment of the Decalogue (committing impure acts) is to be punished with the deprivation of office and with other just penalties, and dismissal from the clerical state, if the case entails a minor or a person who habitually has an imperfect use of reason or with one to whom the law recognizes equal protection.”

Since the abuse of minors was generically among the “sins against the sixth commandment” in the 1983 Code, it is news. Now, the crime has a specific canon in which the whole issue is brought together. Reference is no longer made only to the clergy but also to the laity, and this is normal. After all, in the last thirty years, the Holy See and the episcopal conferences have produced abundant legislation that was necessary to be incorporated into universal law – because it had already matured enough.

Canon 1326 establishes that “he who has abused the authority or dignity of the office to commit the crime must be punished more seriously than what the law or precept establishes,” a rule that also applies to those who repeat the crime.

Among the innovations, in addition to a more systematic distribution of the canons compared to the 1983 draft, crimes typified in recent years in special laws, such as the attempted ordination of women, and also the recording of confessions, and the sacrilegious consecration of the Eucharistic species, have been incorporated into the Code;

A necessary novelty is the incorporation of administrative offenses because not even those in the Church who are called to manage temporal goods are considered exempt from the possibility of committing a crime. In short, there is greater certainty in the sanctions and has the purpose – explained Bishop Iannone – to “make universal penal norms increasingly suitable for the protection of the common good and of the individual faithful, more congruent with the needs of justice and more effective and adequate to today’s ecclesial context, evidently different from that of the 1970s, the time when the canons of Book VI, now abrogated, was drawn up”.

It must be said that Pope Francis acted in perfect continuity with Benedict XVI as he did in other cases that concerned, in fact, the legal framework: from the reform of the Vatican City State to financial regulations, to reforms of the penal Code.

On the other hand, when there was a discontinuity, there were problems. Just think of how the new departments were managed, starting with the Secretariat for the Economy, which has seen several conflicting regulations over several years, in a ballet of skills that has not benefited the stability of the institutions. Or think of the idea of forming a staff office, announced and then withdrawn within a day.

The reform of Book VI of the Vatican penal code thus poses a broader problem concerning the perception of Pope Francis’ reforms. Very often, there is a tendency to speak of a discontinuity or big news within the pontificate. Suppose there can be a discontinuity in the style of government and in the way of exercising the papacy. In that case, it is challenging to restart everything from scratch when there are legal situations that have been started, studied, and delineated. Ultimately, it is a question of maintaining the necessary balance, which is extremely difficult when you go to start over without the weight of history and tradition.

It is a problem of the reform of the Curia, which has been in progress for eight years now: the final text, which could be published at the end of June, has the problem that it must be harmonized with canon law.

In some cases, the temptation is to change canon law rather than reform it. But with what advantage? With what purpose? And with what result?

These are the central themes of a pontificate. But the Pope, by promulgating reforms such as those of Book VI of the Penal Code, also shows that he understands what the point is. And to maintain the necessary continuity in some circumstances. It remains to be seen how the balances will be managed when this continuity is not guaranteed.