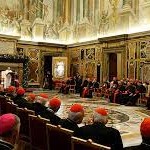 Without an announcement in the official bulletin, Pope Francis has made a small reform that could have a significant impact: he included, among the members of the three new dicasteries created as such, laypeople and monsignors alongside cardinals and archbishops. It is a small thing, since also before there were lay members in some of the dicasteries. However, it can have some meaning.

According to Pastor Bonus, the current constitution regulating the functions and duties of the Curia organizations, “the proper members of a Congregation are cardinals and bishops.” And this while admitting that “according to the peculiar nature of some dicasteries, clerics and other faithful can be included with cardinals and bishops.” The Pastor Bonus also stresses that members “are taken from among the cardinals living in Rome or outside the city, to whom are added some bishops, especially diocesan ones, insofar as they have special expertise in the matters being dealt with; also, depending on the nature of the dicastery, some clerics and other Christian faithful, with this proviso that matters requiring the exercise of power of governance be reserved to those in holy orders“.

Scrolling through the Pontifical Yearbook (Annuario Pontificio), the old congregations and the old pontifical councils, still untouched by the Curia reform, have no lay members. But not the three departments already created, even before the reform was put into practice: the Laity, Family and Life department, the one for Integral Human Development, and the one for Communication.

The three dicasteries merged old Pontifical Council that might encompass lay people among its members. However, Pope Francis’ choice might be to change something regarding the membership of the dicasteries.

The striking thing is that these new decisions have not been announced. When the Pope includes a cardinal among the members of a dicastery of the Curia (all cardinals are included in one or more dicasteries) it is announced in a bulletin of the Holy See Press Office. The same happens when the Pope appoints the consultants of the dicasteries of the Curia, that is, those who are called to help the dicasteries in some specific tasks.

The inclusion of laypeople among the members of the new dicasteries only became known when their names were published in the Papal Yearbook, which is basically the Vatican’s who’s who, published every year. In the yearbook, there are not only the Vatican dicasteries, but all the contacts of the dicasteries, the names of the officials who work there, and even all the monsignors of the world.

According to Pastor Bonus, the Roman Curia has two types of organisms: Congregations and Pontifical Councils. The former, real governing bodies, are always led by a cardinal. The latter can have an archbishop as president. Episcopal ordination has always been considered necessary because there was a need for the Pope’s first collaborators to be in collegiality with the Pope himself. Since the Pope is the bishop of Rome, it follows that one must at least be a bishop to be in collegiality with the Pope. The same is true for the members of the dicasteries.

This will no longer be the case with the new apostolic constitution, the Praedicate Evangelium, first of all because the hierarchical distinction between the various departments will fall. And second because Pope Francis, as he has always done up to now, implemented the reform even before the decision was formalized. After all, all the new dicasteries were born before the meetings of the Council of Cardinals and not after.

This is also why the discussion on the text of the new constitution never seems to end. The text has been finalized for some time. There are, however, various points to resolve so that the text is in harmony with canon law. In the end, a theological coherence in doing things is also needed. It’s not easy.

Pope Francis’ reforms constantly undergo subsequent adjustments. Pope Francis makes a decision and puts it into practice, sometimes without weighing the actual consequences. Therefore, there is a need to adjust the reforms to make sure that everything is consistent with the tradition of the Church and with current legislation.

There are various other cases where Pope Francis’ decisions required adjustments.

In a week in which the Holy See awaits MONEYVAL’s judgment on the transparency of its financial system, it is worth remembering that even the investigations into the Secretariat of State investment in a luxury property in London have had a very severe impact on the Vatican system. Pope Francis has ordered a summary proceeding, bypassing the Promoter of Justice, forcing the Court to investigate and create a difficult to explain situation. In fact, it has not been explained, and simply the people investigated have all been removed, for various reasons, from Vatican positions.

On financial issues, the Pope’s steps back and forth in making decisions should be remembered: from reversing the decision for external auditing granted to Pricewaterhouse Cooper to the motu proprio I Beni Temporali, which better defined the competences of the ‘APSA (the so-called “central bank” of the Holy See) and the Secretariat for the Economy, the new body sought by Pope Francis to supervise all economic transactions.

Also, there is the well-known case of the announcement of the establishment, in the Secretariat of State, of a personnel office. This announcement was then rescinded the following day by the Holy See Press Office, which spoke of “a project under study. “

It is here, then, that Pope Francis’ reform appears imperfect. The Pope calls it “the reform on the go,” but reforming the structures involves a plan, not just an idea. And this is perhaps the biggest problem for the governance of the pontificate.

We do not know if the other dicasteries will also have laypeople among the members. But the novelty is there, and it cannot be put aside. It certainly has its meaning.

One Response to Pope Francis, the imperfect reform