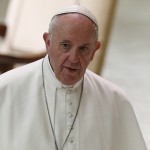 At the end of the Vatican summit on the protection of minors, while a follow up restricted meeting of Vatican dicasteries is taking place today, the issue of small lobbies of power and Vatican careerism still lies on the background. This issue affects every pontificate. Pope Francis’ one is no exception.

The way the issue developed during this pontificate is somehow different, though, and it is hardly explicable. There are no evidences, but only deductions. Only speculations can help to understand how things are moving, and to draw a line and put things in order.

There is a book, “In the closet of the Vatican,” written by LGBT activist Nicolas Martel. The book was out Feb. 21, when the summit on the protection of minors was beginning, and enjoyed a huge marketing operation.

Translated into eight languages, drafted in three years with the help of 80 collaborators, the book written by Martel should not even be mentioned, filled as it is with imprecisions, prejudices, innuendos and strong attacks moved mostly toward people who passed away or simply cannot defend.

Martel’s book is in fact a signal. As said, people targeted are always old and part of the old Vatican world. These people are pilloried for their hypocrisy, as they are described as practicing gay in private while being strong anti-LGBT activists in public.

The book saves the new Vatican world, and even somehow praises it, because not targeting that world or showing appreciation for its moves is an indirect, but actual, praise. This new world is more “homophilic,” more eager to come to terms with the spirit of the world, and even eager to accept some openings on the notion of family. So, even homosexual couples can be considered families, also in juridical terms. In the end, this new world thinks that the Church might not oppose when civil laws on civil unions are proposed.

The book seems actually to draw a line between good and bad people, and the bad are those who proved to be against any LGBT claim, like civil unions or the adoption for homosexual couples.

This new generation is longing to gain power. It is less attached to the Catholic identity and less Catholic in defending Catholic principles, and more open to entertain a dialogue with the world. It is an outcome of society and education imposed during these last 40 years and began during the post- Second Vatican Council discussion.

Imprecise as it is, Martel’s book is however framed into a transition within the Church. It is a crucial moment.

The book also presents a revealing detail: in 2015, Krzystof Charamsa, official of the Congregation for the Doctrine of the Faith, decided to out and become an open gay activist. For this reason, he asked Martel for suggestions to organize the press conference, because he was impressed by his previous book “Global Gay.”

Martel made his homework, clarified Charamsa’s intentions and then helped him. Charamsa and Martel then met him twice while drafting this last book. After the outing, Charamsa went out of the Vatican, and, as much as he can feel still a priest, he got a latae sententiae excommunication. The point is that Charamsa is asking the Church to change its teaching and point of view in order to be able to feel free to do what he feels better.

Charamsa is the specimen of a new mentality that puts at stake the same identity of the priesthood, and – more in general – the same human identity. The issue is not about celibacy. The issue is about the sexual impulse, that – according to this view – must always be seconded. There is no possibility that one person make a life choice, may it be matrimonial or total chastity. This is against the human nature, according to this new ideology.

The generational change is also about this switch of mentality. Looking the situation through the lenses of the generational transition make things clearer.

Pope Francis election was born with the idea of marking a discontinuity. Pope Francis was chosen because there was the need of a Pope that seemed to be open, but at the same time was traditional. Pope Francis was also the candidate of the old Curia, the one considered to be able to restore the relations with the Vatican diplomat that felt marginalized by Benedict XVI.

Synods on family also were a first experiment for some openings within continuity. Doing (presumably) new things with old people. It did not work.

The mid-term report of the 2014 Synod of the family presented some opening to the irregular couples, and most of the Synod’s fathers protested. Pope Francis bypassed the issue asking to publish the whole final report, included the paragraphs that did not get the Synod’s consensus of two thirds. It was not enough.

Charamsa’s outing, at the eve of 2015 Synod’s, was also a signal. The new outbreak of the abuse scandal, that in fact never ended, was another alarm bell. The publication of this latest Martel’s book is thus a new tool in the hands of what Martel calls “the parish.”

Struggle of powers are not new in the Vatican. A certain homosexual subculture is not new, either. It was described in well documented studies, like that of Fr. Dariusz Oko on homo-heresy.

The struggle of power is now framed in a wider generation change. The Vatican world as a whole is changing, and it is doing it right now.

Pope Francis, in the end, knows that. For this reason, the discussions on reform are very long – consider that Curia reform will be submitted to a world consultation. There is the need to reassemble the Church’s lines. To find a way to manage the transition. And to stay within the Church tradition, sometimes showing some shy opening.

Perhaps, these are the lenses through which reading this pontificate. This pontificate is aimed at mission and people, because the Church needs prayer and mercy to overcome this situation, with a new generation pushing to take over the power and bring the Church outside of itself. How this route can be effective, and how Pope Francis can succeed simply with his charism and some twist, is yet to be seen.