Pope Francis’ Real Challenge Pope Francis and the family, the next step 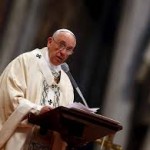 More than a need for a reform, the Roman Curia needs better functionality and more vision – these are the conclusions one can draw from last week’s events in the Vatican. The week began with the meetings of the Council of Cardinals to discuss about Curia reforms and also with the international incident raised by Pope Francis’ Apr. 12 words about the Armenian genocide. The Council of Cardinals has finally given up any intention to undertake a “revolution”, and has planned an agenda aimed at studying more in depth the issues at stake. In the meantime, the consequences of the Pope’s words during the Armenian-rite liturgy in the Vatican proved that further attention to the functions of the Roman Curia might help Pope Francis in his path forward.

The Armenian incident can help us to understand a wider scenario. Pope Francis has always been close to the Armenian community, and he acknowledges that the massacre of Armenians that took place in Turkey between 1915 and 1917 has all the characteristics of a genocide. This is the reason he wanted a celebration in St. Peter’s Basilica to commemorate the 100th anniversary of the genocide, and at the same time to make a contribution to reconciliation. The Armenian genocide is not acknowledged in Turkey. Officially Turkey holds that Armenians died because of an armed conflict which also caused many Muslims deaths. However, at the moment, this official position is not intransigent. The Turkish premier, Ahmet Davutoglu, has been promoting a reconciliation process for long a time. As a result of this process, Turkey may agree to acknowledge the genocide in historical, but not legal, terms, because the latter lead to the conclusion that the entire Turkish people are accountable for the crime, while the historical approach sheds light on the facts, but does not imply a common responsibility. This is not an easy path to tread.

In his 2001 trip to Armenia, St. John Paul II never pronounced the word genocide, but he used it in a joint written text along with the Catholicos Karekin II, the head of the Armenian Apostolic Church. In this way the late Pope acknowledged the historical fact of the genocide, but avoided taking a strong stance as a Church’s leader, since every word could have been misinterpreted.

When Pope Francis’ Apr. 12 discourse was being prepared, its drafters wanted to respect Pope Francis’ wish to highlight the genocide issue. The speech – via cypher – was dispatched to an inner circle of papal nuncios during the previous days. The question whether or not to use the word genocide was widely discussed within the Secretariat of State. In the end, it was decided that the best thing was simply to quote from the joint statement of St. John Paul II and Karekin II.

It would have been better if Pope Francis, while reading his prepared text, had explained that he was quoting from the 2001 joint declaration. In fact, the real error of the speech comes shortly thereafter when the Pope draws a direct parallel with other, similar historical events in the twentieth century, while he referred to the 1994 massacres in Rwanda as “mass killings.” It is noteworthy that Rwanda’s massacres were the first to be acknowledged as a genocide by the International Court at The Hague.

For this reason, it was easy for the Turkish government to protest. After the talks that took place during Pope Francis’ visit to Turkey last November 28-30, the Turkish government was convinced of the Pope’s backing for the reconciliation process as the Turks understood it. So, last week’s papal discourse was interpreted as a betrayal, one that cast the Armenian genocide in legal, not only historical, terms. Hence, a strongly-worded Turkish Foreign Ministry press release was published, one that zeroed in on the legal notion of genocide, and thus shed light on the mistakes made by the Holy See in drafting the Pope’s text.

The Turkish Foreign Ministry text not only protested against the Pope, but also against the Armenian representatives at the liturgy in St. Peter’s. Patriarch Aram I from Cilicia added about 10 minutes of off-the-cuff remarks to his written intervention, and described with conviction and eloquence his account of the genocide that had been systematically carried out against the Armenians by the Turks. There is no need to point out that the Turkish government was not pleased with this.

This story is revealing and provides much food for analysis. This is not the first time that a non-Catholic guest of the Vatican was able recently to speak out strongly. The same thing happened during the 2014 Synod of Bishops when Metropolitan Hilarion of the Russian Orthodox Church attacked the Ukrainian Catholic Church. The Secretariat of State remained silent…

As it remained silent following the Armenian incident. The Secretariat of State pondered all the possibilities: to issue a clarification would be tantamount to admitting fault; to issue no clarification and wait for nerves to settle down — this too is a strategy. But the best strategy is to have foreseen the Turkish reaction and to have prepared a better overall analysis in advance. The lack of both of these steps is the consequence of texts not being properly checked and the lines of communication not being kept open between nuncios, analysts and the drafters of the Pope’s remarks. If a mistake can be said to have occurred, it was that gaps in communications like these were not properly remedied.

The will to condemn the Armenian genocide, thus making a step forward on the reconciliation, was fully present in the Vatican. But there was also the awareness that diplomatic tension with Turkey could follow suit. Every step was made to foster the reconciliation and avoid any break with Turkey. Something failed, however, within the Vatican Secretariat of State, so that it did not properly handle the reports coming in from Turkey and Armenia.

These dysfunctions are the real problem that must be solved. Rather than a comprehensive revision of “Pastor Bonus”, the Apostolic Constitution governing the Roman Curia, the Council of Cardinals should think about the rationalization of resources. There are many crossed competences between dicasteries, but this problem cannot be solved by rolling smaller dicasteries into bigger congregations. A better use of resources must be envisioned.

However, resource allotment is not a hot topic during discussions of the Council of Cardinals, and there is no reform of the Secretariat of State on the agenda. During their last meeting of April 11-13, the Council of Cardinals made the decision that a further commission for communication was needed in order to put into practice the suggestions made by the Committee for Communication established in July. The Council also discussed their working methodology, which is now more urgent after nine meetings over one and a half years. The Cardinals also concluded that a committee should draft a new Apostolic Constitution to replace “Pastor Bonus”.

These discussions mostly focus on structure, but no mention is ever made of functionality. It is not well understood how these new dicasteries will work (the establishment of the super congregations of Charity, Justice and Peace and Laity, Family and Life is now imminent). Another recurrent question is whether a better organization of competences within and between the dicasteries could replace this continuous push for a general reform.

This last consideration brings up the problem of vision. Rightly, Cardinal Gerhard Ludwig Mueller, Prefect of the Congregation for the Doctrine of the Faith, insisted that the task of his dicastery is that of giving a theological structure to the pontificate. This is what the Roman Curia is needed for, to assist the Pope, the Vicar of Christ, with any of his responsibilities.

The Secretariat of State, on the other hand, is called to give a diplomatic shape to this pontificate. St. John Paul II relied upon Cardinal Joseph Ratzinger for theological structuring; on Cardinal Agostino Casaroli to handle its diplomacy;  on Cardinal Roger Etchegaray to build diplomatic outposts; on Cardinal Paul Poupard to bridge cultural relations. These individuals also formed the next generation, whose most prominent representative is now Cardinal Jean Louis Tauran – who also provides continuity between the last two pontificates.

Real reform of Secretariat of State may in the end treat the way it exercises its mission in the world. Under St. John Paul II, the Secretariat of State established cultural bridges to dialogue with atheistic regimes, thus contributing to the downfall of European Communism. Benedict XVI challenged the post-modern world, and based his diplomacy on truth – an approach echoed in current diplomacy. Now it is time to bring this diplomacy of truth into the Church’s missionary activities. One of the ideas circulating is that of using Church structures – refugee camps and, above all, schools and health facilities – as diplomatic outposts. The Church’s missions may become the ground for the diplomacy of truth, committed to defending the integrity of the human being.

Data may help to clarify how this commitment could be significant. Archbishop Silvano Maria Tomasi, Holy See Permanent Observer to United Nations in Geneva, quantified the Catholic commitment to the High Commissioner for Human Rights on May 27, 2013.

In the field of healthcare, the Church’s worldwide charity and healthcare centers include (beyond hospitals and clinics) 18,179 dispensaries; 547 institutions for people with leprosy; 17,223 homes for the elderly, the chronically ill or people with a disability; 9,882 orphanages; 11,379 infant childcare centers; 15,327 marriage counseling offices; 34,331 social rehabilitation centers; and 9,391 charitable institutions of other kinds.

These data indicate the grassroots of a diplomacy that is aimed at helping the “least” or “last ones”, following Pope Francis’s call for the Church to be in a state of permanent mission. But this mission cannot be detached from the vision. Every situation is linked the other. Without a real diplomatic effort – comprising documents, attention and the martyrdom of patience, as Cardinal Agostino Casaroli used to put it – there is no grassroots diplomacy.

Nevertheless, the Secretariat of State already possesses the tool to implement this diplomacy for the “last ones”: the Bambino Gesù Pediatric Hospital in Rome. Recently, the governing structure of the Bambino Gesù was reformed, and a new president was installed. An implementation of the Bambino Gesù mission would make the reform of the Secretariat of State more comprehensive, and would serve as a good example of how to reform the Curia. This reform should have been a conversion of hearts first of all. Instead it took the shape of a reform of structures.

One Response to Pope Francis, the necessary diplomacy