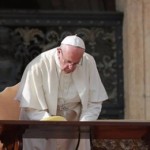 The Apostolic Letter, “Misericordia et Misera,” officially concluded the Extraordinary Holy Year of Mercy. In a certain sense, the publication of the letter also inaugurated a new phase of Pope Francis’s pontificate.

The short document, published on November 21, contains three main decisions: the extension of the mandate to the Missionaries of mercy, that is, priests who were given the faculty for the Holy Year to absolve the five sins reserved to the Apostolic See; the extension of the validity of the confessions heard by members of the Priestly Fraternity of Saint Pius X (SSPX), better known as Lefevbrists; and the decree that all the priests can absolve the sin of abortion, a sin so grave that anyone who commits it is excommunicated latae sententiae (automatically), and whose absolution was normally reserved to the local bishop.

These three decisions seem to show a new direction in Pope Francis’s pontificate. Decentralization was the key word during the first phase of the pontificate, and it was even considered – this is what we can assume by reading the Evangelii Gaudium – to give local bishops some of the doctrinal powers of the Congregation for the Doctrine of the Faith. Also, the juridical power of bishops was enhanced with the new procedural norms for cases involving matrimonial nullity. And Pope Francis mostly looked to bishops to carry out the real reform he cares about, that of the profile of bishops. However, these three aspects of the much-touted “decentralization” are now sidelined by the three main decisions of the Holy Year.

The Church’s bishops are to some extent victims of these decisions of Pope Francis. Their prerogative to decide if and how to absolve a sin that leads to excommunication, like abortion, was effectively contravened, while some canon law experts are already discussing whether abortion should still result in the excommunication of the sinner.

Bishops were also circumvented by the extension of the sacramental faculties of the Missionaries of Mercy, whose mandate in fact touches that of the Apostolic Penitentiery. The five sins reserved to the Apostolic See are: profanation of the Eucharistic species; a priest’s attempt to absolve an accomplice in a sin against the sixth commandment; a priest’s violation of the sacramental seal of confession; a bishop’s consecration of a bishop without the Pope’s authorization; physical violence against the person of the Pope.

These five sins extend from Satanism to the abuse of the power of absolution, and they are very exceptional and grave sins which these special ministers will be able to absolve in the name of the Holy Father.

Bishops are finally sidestepped by the decision about Lefevbrist priests. Pope Francis wanted to go beyond any doctrinal issues, as these are part of a dialogue that started in 2009 and is still at the starting point, as Bishop Bernard Fellay, General Superior of the Priestly Fraternity, has admitted. The Pope’s decision also sidesteps the dialogue with Lefevbrist bishops, and avoids granting them the mandate that they wish. The Pope directly grants all the faithful continued permission to confess their sins validly to Lefevbrist priests, as if these priests were already in full communion with the Catholic Church. The Pope followed this pragmatic approach in Argentina last year. Cardinal Aurelio Poli, Archbishop of Buenos Aires, asked the Argentinian government to recognize the Argentinian branch of the SSPX as an ecclesiastical association, while they wait for recognition as a society of apostolic life. The request was accepted by Argentinian government, and so the “Brotherhood of the Apostles of Jesus and Mary” (this is the SSPX in Argentina) enjoys the privileges of entities that are linked to the Catholic Church.

Pope Francis operates out of a pragmatic reasoning, reaching out for peripheries with a clear agenda of mercy. There is indeed the risk that by imposing this clear agenda of mercy, the Pope sidesteps every possible objection, while he also ignores the Church’s much-vaunted principle of subsidiarity. This subsidiarity is based on the power inherent in a bishop’s ordination, so that he can spread the Gospel according to his own sensitivity to the flock entrusted to him.

What happens if the shepherds have sensitivities different from that of a given pope, and what if the flock itself asks for something different from what the pope wishes to offer? Usually, the Catholic Church has been guided by nuances, and popes have always guaranteed unity by permitting different narratives, but by keeping the gaze of the whole set on Jesus Christ and the Gospel – good examples of this are the CDF’s 2000 declaration “Dominus Jesus” and the two CDF documents on liberation theology from the 1980’s.

Pope Francis’s approach is different: he sidesteps doctrinal issues and makes pragmatic decisions. For example, after years of doctrinal dialogue with the Lefevbrists, he permitted the Catholic faithful to go to confession to Lefevbrist priests, a move that someone in Rome labeled as a “silent annexation.”

Behind Pope Francis’s pragmatism, is a group of persons who are acting on an agenda behind his back, while another group presents itself as the authentic interpreter of the Pope’s thought. Both groups overstep what the Pope has actually decided, with the consequence that heated debates are stirred up.

In the US Church, there was a dispute that dealt in the end with the bishops’ mandate. Archbishop Charles J. Chaput of Philadelphia, who took part in both of the synods on family and is the USCCB delegate for the implementation of “Amoris Laetitia,” after a wide consultation in his diocese, issued guidelines on how the Pope’s post-synodal exhortation must be interpreted and implemented in his own diocese. The seven-page guidelines reiterated the Church’s teaching and at the same time emphasized discernment and mercy.

This approach was strongly criticized by the newly-created Cardinal Kevin J. Farrell, Prefect of the Dicastery for Laity, Family and Life. Cardinal Farrell said that it was more opportune that guidelines for dioceses be published after consultation within the bishops’ conference, so that all the bishops would have a common take on “Amoris Laetitia.”

Archbishop Chaput responded that “Amoris Laetitia” called upon every bishop to implement it within his own diocese, and this is true. The Pope said he wanted all the bishops to pursue and apply mercy in their own diocese.

Behind this dispute are not only two different ways to interpret “Amoris Laetitia” or even Pope Francis’s teaching in general; there is instead a wider debate over the meaning of the episcopate. Bishops’ Conferences are not divinely ordained, they are simply administrative gatherings that help bishops to coordinate policies within national territories. Each bishop has authority over his own flock, even though this does not mean that a bishop can go against the teaching of the Church or against the Pope. It means that it is up to each bishop to make those teachings his own and to find a way to apply them in accord with his own sensitivity to his flock, without any weakening of Church doctrine, but at the same time with the application of doctrine to pastoral practice.

In fact, combining doctrine and pastoral care has become more difficult. Especially now. Around Pope Francis there is a sort of curtain created by a conspiracy. Anyone who criticises Pope Francis’s approach or statements is automatically labeled “an enemy of Pope Francis” or “of his reforms.”

This happened already when 13 Cardinals sent the Pope a letter at the beginning of the 2015 Synod, in which they voiced their concerns about the Synod procedures. It happened recently with the “dubia” concerning “Amoris Laetitia” sent by four Cardinals to the Pope. The publication of these “dubia” has perhaps shapened the idea of a plot against the Pope, but the four Cardinals are being attacked for the mere fact of highlighting their concerns, and for the fact that they made their concerns public, but they are not being attacked for the questions they posed.

Probably, Pope Francis is not the only one responsible for this climate. The circle around him is assuredly also responsible. They cast light on what they paint as a plot against the Pope, while at the same time pushing for innovations that can reduce the effect of the bishops’ individual decisions.

Pope Francis seems to be in a waiting mode. At the same time that he has increased his interviews with the press and his speeches, he has suspended the idea of a Church in a state of permanent synod, an idea he pushed at the beginning of the pontificate. Yes, there are the entities that he wanted to establish. The Council of Cardinals called to assist the Pope in curial reform and in governing the Church still meets regularly. Yes, the General Secretariat of the Synod is still there, though the General Secretary has less importance now than he had at the beginning of the pontificate when he also coordinated meetings among the heads of dicasteries. Above all, the Synod’s Secretariat is working on a reform of the “Ordo Synodi,” the document that regulates the makeup and functions of the Synod. This reform might enlarge the membership of the General Secretariat, and perhaps increase the number of bishops appointed memebers by the Pope, with the aim of favoring a more balanced discussion.

Meanwhile, the Pope is not promoting any further debates. He did not do so during the recent consistory, while at the beginning of the pontificate the convocation of consistories was one of his principal methods of governing, used as they were as a tool for promoting dialogue. For example, on February 22, 2014 he convened an extraordinary consistory on the family, which was opened by Cardinal Walter Kasper’s speech that set the tone for the two Synods on the family.

In February 2015 there was another extraordinary consistory called to discuss curial reform.

However, the Pope’s most recent consistory was not preceded by any extraordinary meeting, though sources maintain that one had already been scheduled. No one can explain why the Pope cancelled the meeting.

In the end, spaces for collegiality have seemingly been reduced at the very moment that Pope Francis’s impact might have an extraordinary weight. Given the blockage in the Roman Curia which is waiting for a more definite reform, and given that priests are confused over how to apply properly Pope Francis’s teaching in “Amoris Laetitia,” one gets the impression that the Church is experiencing a never-ending Synod, in which the push for discernment will not ever close off the debate, with the result that Pope Francis’s more groundbreaking choices are weakening the local churches. The Pope of the peripheries is now governing a Church that is divided over every issue, while it is equally unable to set its gaze toward the broader issues.

Paradoxically, the Pope’s agenda of mercy might then reduce the power of the local churches.

In the end, Pope Francis’s three recent decisions underscore just this breach. He has centralized mercy. He did not do so out of any practical need, as was the case in the decision to centralize the trials of clergy accused of sexual abuse of minors, because those cases were being neglected at the local level. Now the interpretation of the Gospel has been centralized. And nuances are no longer welcome.

Tagged with: Pope Francis and Collegiality • synod of bishops