Pope Francis, the outcomes of the outward Church 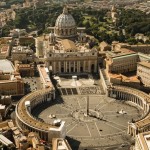 Cardinal Pietro Parolin, Vatican Secretary of State, attended last week the Bilderberg Meeting. His attendance can be seen from two different points of view. In both cases, it is a clear indicator on the Church’s impact in the world.

The “Bilderberg Meetings” are Chatham House Rules (that means that the information exchange can be used only without attribution) meetings among financial experts, entrepreneurs, media members, economists and politicians. The first meeting took place in 1954 at the Hotel Bilderberg, after which the group was named. It was at the time of theCold War, with the aim to strengthen Europe – United States relations. When the Cold War ended, it became an informal forum, that takes place alternatively on each side of the ocean, and every year discusses topics of world interest.

The Bilderberg Group was dubbed the “shadow government of the New World Order.” Any time that a meeting takes place, protests take place. The “aura” of hidden power of the group comes from the fact invitees are always very influential people, and the conversations are confidential.

It is obvious that the meeting generates networks and relations of mutual trust among a small group of people with great decisional power. It is equally obvious that this can have consequences.

According to the lists available online, never has a Holy See representative taken part in the meeting. Even if Vatican officials had taken part in it, none of them would have had the rank of Vatican Secretary of State.

On the other hand, the Holy See has always avoided being part of “restricted clubs”. In the past, the Holy See has criticized organizations like the G8 or the G20, even being meetings of States and not private people, because of the elitist character of these groups. According to the Holy See, everyone has the right to have his voice heard.

Cardinal Parolin’s decision to accept the invitation is striking. In general, once you get an invitation, you should have in mind what to say.

On the one hand, the Bilderberg invitation to Cardinal Parolin is a sign that the secular world looks at the Catholic Church as a moral authority no one, but particularly the elites, should undervalue.

Pope Francis’ Laudato Si encyclical, mostly read for its political parts and not for its Catholic message, was considered a sort of mandatory reading for politicians, diplomats and economists, who widely used excerpts of it in their speeches.

Likewise, Pope Francis’ more political passages of the speeches to European institutions delivered in Strasbourg Nov. 25, 2014 were shared among the members of Parliament, who in fact did not center in the Christian message, although this was really present in the speeches.

That political consideration brought about the idea of awarding Pope Francis the Charlemagne prize in 2016, given every year to personalities who have contributed to the building of the European identity. Looking at the speeches delivered at the Charlemagne prize, the Church’s work was highlighted for what concerns her advocacy for the poor and the capability of building the identity of nations.

This was, in particular, the topic of the speech of the then president of the European Parliament Martin Schulz. It was the same Schulz who presided the EU Parliament when the release after the 2014 Pope’s visit did not emphasize the excerpts on abortion and euthanasia.

The secular world interest toward religions is mostly political. The Holy See is totally aware of that. After the June 2014 Prayer for Peace in the Middle East in the Vatican Gardens, Shimon Peres came to visit the Pope and proposed the idea to establish a UN of Religions, a super-Parliament whose members would be religious representatives and leaders. Pope Francis took its time.

After the terrorist attacks in Rouen and the assassination of Fr. Jacques Hamel, then president François Hollande called religious leaders at the President’s residence. It was not to seek collaboration, but because he had identified in religions possible agents of self defense within society.

It is evident that religions have a role in society, and that the secular world does not hesitate to exploit this role when it is considered useful for some objectives. Despite this, they have no problem in neglecting or ignoring the religious sentiment any time it goes against the State’s projects or against the decisions of the mainstream thought.

This is a valid point of views. But, on the other hand, there is an equally valid point of view, and in fact does not exclude the other. It is that Cardinal Parolin participation in the Bilderberg meeting is the sign that the Church has been defeated by the secular world.

It is not a matter of cultural hegemony, as it would be easy to claim. In the end, even Benedict XVI asked for a less worldly Church, not to lose sight of God in the middle of wealth and activities.

Raising the issue of a defeated Church has its rationale, however. The Church has always proved to be extraordinarily prophetic. In the name of Jesus Christ, missionaries went all over the world. They did not only convert. They built a civilization. From the Jesuits’ reducciones in Latin America to the extraordinary health system in Africa, through the first codification of human rights by the Dominican fathers of the School of Salamanca, the Church has always built up society, trying to make concrete the ideal of the city of God.

Christianity has been so much a civilization builder that a recent Pew Forum poll on religion in Western Europe recognized that Christian identity is “a powerful marker of European identity,” though the number of practicing people is decreasing.

The Church has always been something that went beyond the organization of States of the secular world. She stayed independent from any secular power, because she was under a greater rationale. Her members took part in the construction of the secular world, but setting the gaze farther than on mere power.

The Catholic Church’s freedom has been maintained at a great cost, since everyone has countered and fought it, preferring more materialistic or secularized forms of Christianity like Protestantism or Orthodoxy – this latter very much linked to the power of the State.

In the end, the Church is in the world, but not of the world. The Catholic Church cannot be considered one of many players on the field, nor can she be perceived as such. Even when the Holy See accepted to enter the international arena, for the sake of advocating for the common good, she did it keeping her peculiarities and even strongly expressing some criticism, where needed.

The Church entered international organizations with a precise strategy, not to partake in any “élite club”. Where it happened, it was because Church’s members where acting at a personal level. It is different, though, for a Vatican Secretary of State: even if he is participating on a personal level, he bears the weight of his position that, in fact, represents the Holy See.

Cardinal Parolin’s presence, in the end, confirms that the Church has become only one of many actors in the play. An actor called to have a dialogue with everyone, aware that ideals cannot be achieved. Moreover: that the invitation of an élite club must be accepted in order to be able to speak for the human being and the common good.

In general, this rationale can be applied to any other field.

For example, it can be applied to the possible China – Holy See deal on the appointment of bishops. The agreement is needed to protect Chinese Catholics, but at the same time it risks being too big of a compromise for the freedom of the Church: China holds the knife from the handle, and any time the Holy See extends her hand, it bleeds by the contact with the blade.

The same rationale is applied when it is said that the Church must meet societies’ requirements, and sometimes it also avoids expressing her view on some issues, as if a world according to the Church’s logic cannot be expected.

The same rationale applies to the issue of the communion for the Protestant spouses, widely debated in Germany – the Bishops’ Conference was opened to the possibility, a group of Bishops appealed to Rome, and there was a meeting in Rome with the Congregation for the Doctrine of the Faith that led to an interlocutory document. In the end, Pope Francis halted any possibility, and this brought about a strong reaction from the German Bishops’ Conference led by Cardinal Reinhard Marx. At the same time, the Congregation for the Doctrine of the Faith letter that communicated Pope Francis’ decision said that “conditions were not mature.”

The hidden meaning could be, then, that conditions could change, leaving room for further discussion, that will certainly take place. This is a rhetorical recourse needed not to generate too much malcontent and at the same time to reaffirm the truth of the Magisterium, avoiding confusion among the faithful – the theme of possible confusion, it is rumored, was strongly advocated by Cardinal Anders Arborelius, archbishop of Stockholm, as Sweden is a place where the Protestant reformation prevailed with violence on Catholicism.

All of these issues might seem unrelated, but they are part of the same rationale.

Pope Francis always preaches about dialogue, culture of the encounter, and evangelization by attraction. All of these issues are very much needed. However, they do not replace the missionary push. Presence in peripheries and material aid, that the Church has always provided in the name of a common good on which to build civilization, cannot be the only ways to spread the Gospel.

For example, Korea was evangelized by lay people, philosophers who were searching for God and found in the person of Jesus Christ the faith that fit. And they found it during a trip to China, that is now a land of atheistic Communism.

Fr. Piero Gheddo, a long-standing and extraordinary missionary, raised the issue. When a major Italian missionary magazine shut down, he said that there was lack of missionary push because the social agenda had replaced the proclamation of the Gospel.

In the end, a Pontificate so focused on mission, that also presents the Pope’s exhortation to praise everyday sanctity, is now apparently in dialogue with the world from an almost subordinate point of view, thus renouncing to the role of inspiring society to put the Church above everything. In the world, but not of the world, the Gospel says.