Pope Francis and the civil war in the Church Pope Francis, any moves with a view to a Conclave?

Pope Francis, the season of trials 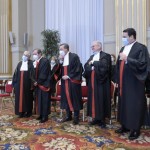 After the trip to Hungary and Slovakia, Pope Francis will face the season of trials. First, there will be the verdict on the alleged abuses of the Vatican pre-seminary, incidentally already moved out of the Leonine City by a Pope’s provision. Then, the hearings will begin, starting from October 5, for the trial on the investment of the Secretariat in a luxury property in London.

In both cases, the issue of interest is not a judicial one. Not that a case of abuse like that of the pre-seminar is not of interest, and it is undoubtedly important to figure out the reasons for the investment of the Secretariat of State in London, and above all how the brokers were involved in the acquisition.

Yet, the scandals that could emerge from the trials, assuming that guilt is proven, are only the tip of the iceberg of a much broader question, which concerns Vatican justice.

We know that the Pope is an absolute sovereign, that he makes the laws, and that he is at the head of the only patrimonial monarchy in the world other than Saudi Arabia. Popes had always respected the prerogatives of the State, intervening very little in them even when the Church had a State, the Papal State. Yet, on the other hand, Pope Francis has shown unusual activism on procedural issues, which, after all, also reveals how the Pope manages power.

The pre-seminary abuse trial should not have taken place because the alleged crimes had lapsed. Pope Francis, however, with a rescript, lifted the impediment of the prescription, starting a procedure that has now reached its final stages.

The London trial should not have been handled as it was. It took four rescripts from Pope Francis, one of which even suspended secrecy, to allow the investigations to run their course. Not surprisingly, one of the lawyers in the trial spoke of a “Special Court.”

Not only. The same prosecutors (who in the Vatican are called promoters of justice) had refused to consent to the request of the president of the Tribunal to hand over the audiovisual files of the deposition of Monsignor Alberto Perlasca. For those who do not remember, Perlasca was the head of the administrative section of the Vatican Secretariat of State for a decade. Initially reluctant to appear in front of the judges, he then decided to cooperate. As a result, he is not even a defendant in the trial, a decision that could make sense, considering that nothing can be done without the direct approval of superiors. But, if this is the reason, it is unclear why Fabrizio Tirabassi, who was in a lower position than Perlasca in the Vatican staff, is also accused.

The refusal to produce Perlasca’s audiovisual files, justified by the need to respect the privacy of other people present, is unprecedented. We are faced with prosecutors who reject the requests of the President of the Tribunal. There remains only one high judge, the Pope, so every ideal of rule of law in the Vatican is wiped out.

These are all issues that, one by one, are addressed by the international press. The Pillar even wonders if the trial will not turn out to be a bluff, considering that the regulations governing these decisions were developed after the crimes were allegedly committed, and not before. Finally, Crux highlights how Perlasca could sooner or later show his face as an informant forced by the fact that he was framed, a bit like Henry Hill in Scorsese’s film “The Goodfellas.”

The Associated Press has noted that the Vatican judicial system has not conform to international standards for some time. Indeed, this new interventionism desired by the Pope seriously jeopardizes the international credibility of the Holy See.

These are burning questions that will become increasingly pressing in the next season of trials. There are other issues to be addressed. For example, no one knows how the investigation into the Fabbrica di San Pietro, ordered by the Pope a year ago, ended. But in that case, there was talk of contracts granted without competition under a personalist regime. Even in that case, however, the Fabbrica had acted before the promulgation of the Vatican procurement law, which was dated July 2020.

All these personal decisions of the Pope put the entire institutional structure of the Holy See at risk. Even as an absolute monarchy, the Papacy had always emerged as an institution where the monarch made decisions collectively. The government of the State was kept separate from the affairs of the Church. Over time, mechanisms had been developed that limited the Pope’s excessive influence, which was patent in several cases. Because the Pope decides, and he is the only one to do so. There is no doubt about this.

The question remains whether a season of trials, accusations, and counter-accusations, of reciprocal poisonings, is a sign of transparency from the inside or if it allows for the throwing of mud at an institution like the Church. Because it is well known that there have always been scandals in the Church. But people come and go, while the institutions remain. These trials, on the other hand, seem like they are not targeting people but institutions. It is a paradigm shift that should not be underestimated. So one question remains: what will the Papacy be like after this season of trials?