Pope Francis and reforms. He has never been more alone than now Pope Francis, a different Easter

Pope Francis, the signs of the times 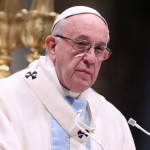 The first page of the new edition of the “Annuario pontificio” might give a clue on Pope Francis’ reforms. The Annuario is the “Vatican who’s who,” which lists the names of all the Curia members and the dicasteries. The first page is always dedicated to the Pope and all the Pope’s titles.

That first page also gives a clue about how the Pope intends to shape his pontificate. For example, Benedict XVI took out from the list of the Papal titles that of “Patriarch of the West,” a clear signal that the commitment for the unity of Christians was going to be central during his pontificate.

The first to notice the novelties of this year’s “Annuario” was Marco Tosatti. On the first page of the new edition, there is the Pope’s name and right after his biography. Only after Pope Francis’ biography, the Pope’s titles. The first of the titles is “Vicar of Christ.” However, the “Annuario” presents the titles as “historical titles.”

Tosatti notes that relegating the title of Vicar of Christ to “the first of the historic titles, that is something that dates back to ancient times, with poor or no meaning today” would fit “theories proliferating among the Jesuits some years ago, inspired by Karl Rahner.” These theories “shed doubts” on the meaning of some of the ancient attributions in the world of the contemporary Church.

Tosatti raises a legitimate concern. In an explanation to the Italian Bishops newspaper Avvenire, Matteo Bruni, director of the Holy See Press office, stressed that “historical titles” signified “the link with the history of the Papacy”.  These titles, Bruni added, “are intended  to be historically linked to the title of ‘bishop of Rome’, since once he is elected Pope, the bishop of Rome gets these titles.”

In fact,  the “Annuario” follows an historical-statistical rationale, not a theological one. By the way, theology is always on the table when it comes to some decisions. And this is the reason why, the Bruni’s explanation leaves room for speculations. Pope Francis has been shown to be an anti-institutional Pope. He believes in the Papal authority, and he is a man alone at the helm. Pope Francis, by the way, considers a title something relative, as he has this anti-institutional perspective.

The reasons for the change remain obscure, although they can be also part of the Pope Francis’s wish to emphasize his role as bishop of Rome.

The Church’s Fathers used to describe the poor the Vicars of Christ, while the Pope was described as Vicar of Christ only later. Pope Francis also likely thought about this. He might have considered that the title of Vicar relates to the poor. Pope Francis has dedicated his pontificate to the poor. He chose the name Francis because, once elected, Cardinal Claudio Hummens told him to remember the poor.

Following this rationale, the Pope might be nothing more than the president of a “federation” of bishops’ conferences, all of them considered on a par and all of them with their particular problems. Already in the exhortation Evangelii Gaudium, Pope Francis proposed that bishops’ conferences could also have some powers on doctrinal issues.

During the discussions at the Synod on the Pan-Amazonian Region and at the Synod of the Family, the rationale of the federation of Churches could be read between the lines. Bishops’ conferences applied a lot of pressure on the issue. Pope Francis himself, as archbishop of Buenos Aires, felt Rome too far away to understand his local problems.

However, labeling the title of Vicar of Christ as a “historic title” reduces the title to a mere function, which is the opposite of what Pope Francis always says.

The Council of Florence clarified the definition of Vicar of Christ in the bull Laetentur Coeli (July 6, 1439). The bull reads that “the Roman pontiff is the successor of the Blessed Peter, Prince of the Apostles, authentic Vicar of Christ and head of all the Church, father, and master of all the Christians.”

The formula is an excerpt from a broader context. Before getting to that formula, there have been many interpretations of the definition. The formula was reprised by both the First and the Second Vatican Council.

It is noteworthy that the Council of Florence was a “council of union,” for the return to the Catholic Church of some of the Eastern Churches. In Florence, ancient theological expressions were discussed. The word Vicar stood for “being in Christ’s place.”

Before, the title of Vicar of Christ was attributed to the bishops. So, the Council of Florence said that the Pope is “the authentic Vicar of Christ.” This way, the Council marked a difference and stressed a particular and unique relationship between Peter and his successors.

The Council of Florence also underscored that the Vicar of Christ is “the head of all the Universal Church,” which means that the Pope’s power is not given by, nor does it come from, the ecclesiastic communion. Instead, the Church is governed by Christ through his Vicar, the bishop of Rome.

It is also noteworthy that the Council of Florence and then the First and Second Vatican Council have clarified that the Papal ministry does not diminish the bishops’ ministry. The bishops are also “natural” shepherds, that is the successors of the apostles. Hence, the bishops are not the Pope’s vicars or delegates. They have a dignity of their own. The definition of the dignity of bishops is quite essential in the ecumenical path, since one of the biggest hurdles for Catholics, the Orthodox, and Protestants to be reunited lies in the exercise of the Petrine primacy.

The Council of Florence also described the Pope as “the master of all Christians.” It means that Peter and his successors were entrusted with the task of preserving and defending the authentic faith.

This is the background of the formula “Vicar of Christ.” Also, St. John Paul II commented on the expression. He did so in his book-length interview with Vittorio Messori, “Crossing the threshold of hope,” published in 1994.

John Paul II underscored that the formula “‘Vicar of Christ’ is a service rather than dignity. It is intended to underscore the Pope’s tasks in the Church, his Petrine ministry, carried out for the good of the Church and the faithful. St. Gregory the Great well understood that. Among all the titles of the Bishop of Rome, he preferred that of Servant of the Servants of God.”

The background behind the formula “Vicar of Christ” is questioned when the formula is trivially considered a “historic title.” Whatever the reason for Pope Francis’ decision, the description bears the risk of reshaping the priesthood. And that has never been Pope Francis’ intention.

More and more, Pope Francis warned the priests to avoid becoming “clerics of the State,” and focused on the risk to consider the priesthood in a functionalist way. The Pope, in the end, is not just a function. He is not a bishop among many. Benedict XVI underscored it. When Benedict XVI renounced to the Petrine Ministry, he took the title of Pope emeritus, and not of Bishop of Rome emeritus. This way, Benedict XVI considered the pontificate as a further ordination, not an additional function to his consecration as bishop.

In the end, Pope Francis’s decisions are part of the outcomes of the big discussion that started with the Second Vatican Council. The Church’s renewal imply a political notion of the Church. Pope Francis’ seemingly (and perhaps unwillingly) made the hermeneutic of the rupture win. However, nothing in the Church is disconnected to its tradition. The history of the Church never starts things completely anew. Christ accomplished everything.

2 Responses to Pope Francis, the signs of the times