Pope Francis: The Struggle behind the Curtains 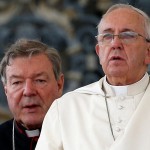 Cardinal George Pell took a leave of absence from his post as Prefect of the Secretariat for the Economy. The announcement of the leave came just one week after the news broke that the Vatican’s General Auditor, Libero Milone, resigned. Though the two events might be linked and the connection between them considered as part of a resistance to Vatican financial reform, there are more complex issues to deal with.

Cardinal Pell took a leave of absence in order to defend himself from the infamous allegations of sex abuse brought against him in Australia. Explaining his choice, he did not hesitate to describe the campaign against him as “character assassination.” In fact, there was a long escalation on the part of newspapers which linked his name to the investigation. This escalation culminated with the news of the charges against the Cardinal and of his summons to appear in court on July 18.

The same escalation took place when Pell was called to testify before the Royal Commission in the State of Victoria for allegations that he covered up sex abuse. As his medical conditions did not allow him to fly to Australia, he asked for and obtained permission to be heard via a video conference from Rome.

The hearing took place in February 2016, and it should be noted that the first questions mostly dealt with Cardinal Pell’s current responsibilities in the Vatican and whether or not he managed money. None of the initial questions had anything to do with an alleged abuse cover up. Furthermore, questions that came afterward had the clear intention of drawing the Cardinal into self-contradiction.

This is a typical modus operandi in an Anglo-Saxon kind of trial, especially in a civil proceeding that often concludes with the payment of compensation to victims. Not by chance the scandal concerning sexual abuse of minors in the Church has almost always led to huge compensations being paid to the survivors. It is true that one priest-abuser is already one too many. It is also true that in too many cases the clergy sex abuse issue was made more gigantic than what it was in order to get millions of dollars in compensation, as Massimo Introvigne stressed in his book “Pedophilia. A Battle the Church is Winning”.

Cardinal Pell’s leave, in the end, has nothing to do with the Vatican financial reform. But his leave also leaves some questions open concerning how effective this reform is.

With the Prefect on a leave until the conclusion of the trial, the Secretariat for the Economy will operate in terms of what is called “ordinary administration”. It is also possible that the Pope will appoint a new Prefect at the end of everything. Or the Pope could even abolish the Secretariat for the Economy. The dicastery has statutes, but at the same time it has no place in Pastor Bonus, the Apostolic Constitution that regulates the Curial offices’ functions.

Though no one thinks about this, Pastor Bonus is still in effect, as Pope Francis pointed out via a rescript solicited by the Vatican Secretariat of State. The reform that is being carried out in the walking” – as Bishop Semeraro, Secretary of the Council of Cardinals, described it – has insufficient institutional roots to hold on in the longer term. As long as a new apostolic constitution is not drafted and promulgated, everything in the old one is still valid.

Moreover, the Prefecture for Economic Affairs, which formerly had the same functions as the Secretariat for the Economy, is still in existence. It has no President, no high-ranking officials and no functions, but – de iure– it has never been abolished. So, if the Secretariat for the Economy were to be shut down, its competences could return to the Prefecture. The same prefecture underwent a reform in 2012 that gave it the competences of a modern ministry of finance.

In the end, how can Pope Francis’s economic reform be described? It is certainly a reform with solid presuppositions intended to make the Holy See’s balance sheet more transparent and in conformity with international standards. At the same time, it is a reform that at the beginning was imbued with a “company-like” mentality, as if the Vatican were a company needing to be restructured.

This mentality led to the appointment of the Pontifical Commissions of Reference in regard to the IOR and the Holy See’s central administration, and then to the expensive external consultants including the contract signed with Price Waterhouse Cooper providing for the external auditing of the Holy See’s balance sheet. The contract conceded total access to the city-state’s balance sheet, and for this reason, following an intervention by the State Secretariat, it was later re-negotiated.

The reconquest is being carried out with intelligence, taking advantage of the false steps of those who tried to carry forward the reform without taking into full consideration what the Vatican is – small false steps, sometimes done in good faith, which nevertheless paved the way for a re-centralization, as happened during the latter days of St. John Paul II’s pontificate.

This brings up a further puzzle: the people called upon to carry out the reform were often not Vatican men. They were not part of that hidden Vatican that has proudly served the Holy See. Many of these latter came from outside the Leonine City’s wall, but once they were in, they left behind all of their previous posts, and began a long and silent work of reform whose fruits are still being harvested. This has not happened for long time.

Libero Milone was one of those men who came from the outside, who was hired via a head-hunter agency. An expert in his field, very much internationally esteemed and with huge skills beyond any suspicion, his post fell directly under the Pope’s supervision.

There are no clues as to the reasons behind his resignation. It seems that he was subjected to an internal investigation, but Vatican sources claim that the investigation did not deal with financial wrongdoing. Sources speak mostly about some false steps of his in management that were not forgiven. His resignation did not come out of the blue. It was the climax of a season of discontents.

Certainly, the reform goes on. But they go on only when they have strong institutional roots. For example, the Administration for the Patrimony of the Apostolic See (APSA) is no longer subject to the Financial Intelligence Authority, as it is no longer involved in any kind of financial transactions. The shut-down of the few accounts opened to the APSA were already foreseen in the 2012 MONEYVAL report.

Recently Italian newspapers have been filled with gossip concerning the alleged vices of some monsignors, with no names being mentioned, but with clear references being divulged. More than frightening, the articles seem to turn the clock back to the end of the 90s. At that time, some media – generally Italian – enjoyed a privileged relation with Vatican officials and secured from them bits of juicy gossip that were in fact aimed at destroying careers.

If we consider this point of view, Milone made a serious mistake in strategy by granting an interview to Il Corriere della Sera, a prominent Italian newspaper. The article was inside the newspaper, while on the first page there was an op-ed contesting the Pope’s economic reform.

It is sufficient to read the op-eds in Italian newspapers to feel the mood of the entrenched Curia that is fighting to take back power and marginalize so many of the lieutenants who designated themselves as such during the Francis era. One of these op-eds also claimed that the Holy See should take its cue from Italy, thereby suggesting that the Holy See should return to that earlier period of psychological edginess toward its cumbersome Italian neighbor. In fact, even the Vatileaks case was born on the Italy-Vatican border, and the second Vatileaks crisis apparently deals with the sovereignty of the Holy See that Italy has never really taken much into consideration.

Not by chance, observers say that Libero Milone’s resignation indicates that there could be a Vatileaks III. It should be recalled that it was Milone himself who started the second Vatileaks crisis with a claim that his computer had been hacked.

Although Pell’s and Milone’s cases are not linked, and they deal with situations very different from financial reform, Pope Francis’s reform does not escape undamaged from these events. But this only happens because the reform had no institutional shield.

Until now, Pope Francis’s reforms were brought about simply via the statutes of the new dicasteries along with internal regulations, but they never involved a larger framework. This lacuna represents a structural limit that allows one to think that the reforms are temporary, transitional. Those who had influence after St. John Paul II’s pontificate are now able to take back control at the helm.

A distinction between the two cases should, however, be made. Justice will decide whether Cardinal Pell is guilty or not, but at the moment he is mostly a victim sacrificed for his lack of prudence. The allegations against him had already been made public at the beginning of the 2000s, and at least one of those proved to be inconsistent. Appointing him a Prefect in Rome meant placing him under a spotlight, and exposing him and the Holy See to a difficult situation. Why was not this considered? And why was Cardinal Pell then used as a scapegoat?

To answer this last questions, it must not be forgotten that the Cardinal is considered a conservative, who during the Synod on the Family represented one of the strongest voices against the “agenda of mercy,” and never retreated from the battle. He is not the kind of Cardinal with whom the media can sympathize.

The Vatican is expected to give some explanation of the Milone case, too. This case, however, seems to deal with Milone’s personal responsibility. It is not a case that affects the general system and the way it works. There is a phrase in Italian that can be translated along the lines of the English expression “throwing the baby out with the bath water.” In this discussion about the bath water, there is the risk that the baby can also be thrown away. This baby is the reform project that existed already before Pope Francis. The project was based in the concept of collegiality and was aimed at eliminating all the centers of power. Pope Francis backed this reform, but now he risks being choked by it, since the reform was de facto destroyed by the new men who have worked on it.