Pope Francis, what is his idea of Church? Pope Francis: the Outcomes of Misericordia et Misera 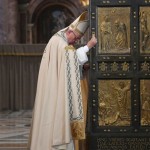 Pope Francis will release today the document “Misera et misericordia,” an apostolic letter that closes the Extraordinary Year of Mercy. This letter might contain, according to rumors, an unexpected decision by Pope Francis: that the extension of the faculty to hear confessions to priests belonging to the Society of St. Pius X, better known as Lefevbrists, will become a common practice, and will not be just an exception for the Jubilee.

Above all, if the rumors prove to be true, this decision would seem to go completely against the grain of Pope Francis’s pontificate.

The Pope keeps on asking the Church to avoid rigidity, as he did in a recent conversation-interview with Fr. Antonio Spadaro, Editor of Civiltà Cattolica, which was included in a book that collected the Pope’s homilies in Buenos Aires. That pastoral care is clearly one of the core themes of his pontificate can be noted by the bishops he has appointed during his pontificate, but also by the way he preaches his “agenda of mercy.” It is not that the Pope is not faithful to doctrine when he speaks about the defense of life and family and about ideological colonization. He is faithful, and in a very traditional way.

At the same time, he considers doctrinal issues as something that comes later. The Pope first tackles pragmatic issues, since he thinks that theological discussions slows down the possibilities of an intervention. At least, this is the apparent rationale behind Pope Francis’s decisions.

There are many examples of this rationale. First example: at the beginning of the pontificate, Archbishop Rodriguez Carballo, number two in the Congregation for the Institutes of Consecrated life, noted that the Pope had opened to the possibility of changing canon law in order to respond to the crisis of vocations.

Second example: the reform of the Roman Curia is carried forward “while on the go,” as Bishop Marcello Semeraro, Secretary of the Council of Cardinals, explained in one recent article in Il Regno, and this is also the reason that the statutes of new dicasteries are written in a way that they can be adjusted and implemented later.

Third example: the way the Council of Cardinals was established, inasmuch as Pope Francis understood the unavoidable importance of the Secretariat of State only after the Council was already established, and then invited Cardinal Parolin, the Secretary of State, to take part to the meetings. It is noteworthy that the invitation arrived with a formal, but not official, act – there is still no document that includes Cardinal Parolin in the Council of Cardinals.

Finally, we can spot this rationale behind the alleged decision on the SSPX, as the dialogue with the Lefevbrists has been dragging on for years. Pope Benedict XVI opened the dialogue by revoking the excommunication of the bishops illicitly ordained by Lefebvre, and kept the door open with the de-restriction of the older form of the Mass. In this way, Benedict took away from the traditionalists every excuse to avoid the dialogue.

After this, Benedict asked the traditionalists to accept some minimum requirement in order to re-enter into communion with Rome, starting from the acceptance of the Magisterium, including the Second Vatican Council. This remains an issue. If he’d make this decision, Pope Francis would go beyond doctrinal preambles, as his pragmatic solution would bring about only the recognition of the validity of confessions heard by priests of the SSPX. The rest will come.

The “dubia” (doubts) deal with five controversial issues arising from “Amoris Laetitia,” and they ask the Pope to clarify whether the exhortation has changed the doctrine of the Church. These “dubia” are, however, the archetype of all the questions surrounding Pope Francis’s pontificate.

Can a post-synodal apostolic exhortation be more important than an encyclical? Certainly not. But, through “Amoris Laetitia”, and before that through the apostolic exhortation “Evangelii Gaudium,” Pope Francis wanted to bypass some hot issues. The rationale is always the same: first action, and after that discussion.

For this reason, it is difficult to foresee that Pope Francis will respond to the cardinals’ “dubia”. Most likely, the Pope does not even intend to say that the doctrine of the Church has changed. Most likely, it is not even the Pope’s intention to change it. He rather wants to propose pragmatic solutions, and by imposing them, to bypass what he labels as never ending discussions.

This is not just an issue about Pope Francis’s “modus operandi”. Behind this wish to bypass every form of discussion, beyond his wish to overcome resistance which he considers bureaucratic and not substantive, there are areas of opacity that make room for those whose agenda it is to change Church teaching.

Then, John Paul II and Benedict XVI’s pontificates brought the Church out of the swamp of the debate between liberals and conservatives that characterized the years following the Second Vatican Council.

To understand how this happened, we should look back to some of the experts of the Council. For instance, Joseph Ratzinger was a progressive, and at first he never left that path. He wanted to carry forward the discussion. But then he left that path when he decided to stay with the Church at a time when the post-conciliar debate was headed outside of the Catholic Church.

Ratzinger – and others with him – thus took himself out of a discussion that leaned a lot toward that Protestant ethic which permeates today’s secular mentality. This discussion makes no room for the action of grace, but rather focuses on the concrete point that the Christian ideal is too hard to be achieved. So, step-by-step personal conscience replaces Truth and the Christian ideal.

With Pope Francis’s pontificate we are back to that discussion which was already – painfully – overcome. The themes of mercy and of the joy of the faith were already present during the previous pontificates, but this is the first time these themes have been used as a tool to try to change the Church’s doctrine. This exploitation is mostly the work of champions of secular thought, like Eugenio Scalfari, founder of the leftist La Repubblica newspaper, that keeps on printing conversations between Scalfari and Pope Francis as though every word published was the Pope’s, even though Scalfari admits that he uses no recording devices and does not take notes during the interviews.

This is the scenario we are living today. And this is the reason that after “conciliar” and “conciliating” bishops, we now need “confessing” bishops, bishops able to confess the faith. This is what this pontificate is really lacking.

The “dubia” of the four cardinals are not just representative of the dubia of other authoritative members of the College of Cardinals who preferred to remain undercover. These are also the “dubia” of many parish priests who are waiting for a clarification from the Pope or at least from their bishops.

If the Church is experiencing this moment, it is not just because of Pope Francis or of those who are around him acting on their own agenda behind his back. There is a more profound problem that concerns catechesis, the education of the people of God, the formation of bishops. There is a lack of priest confessors, bishop confessors, cardinal confessors. There is a lack of the needed connection between theology and pastors that cannot be solved through new means of communication.

Theology is now under a cloud, and even teachings are under surveillance, as Sandro Magister has revealed. The veteran Vatican-watcher published a letter delivered to all the professors of the John Paul II Pontifical Institute for Marriage and the Family. The letter was signed by a certain “Observatory for Pope Francis’s Reform of the Church” – in fact, a group of students that is not even linked to the recently appointed new top ranks of the Institute – that smells more like “Pravda” than like “parrhesia”, and gives an idea of the animosity reached by the discussion.

Perhaps, the solution cannot be found in pragmatic decisions, nor in grand-scale theological discussions. Perhaps we should look backward in order to go forward. And perhaps the council of reference should be the Council of Trent, as the Council of Trent established seminaries and asked bishops to make frequent pastoral visits in their dioceses. With the Council of Trent, the Church became a missionary of culture, and bishops and priests were called on to be mediators of theological thought elaborated at a very high level. This is the “Trent paradox”. It means that the Church is called to look back to its roots in order to understand how it responded to the Reformation that has now subtly become a hidden enemy.

We often look at Paul VI’s reforming ideas to understand Pope Francis’s reforms. Even Pope Francis has said that Paul VI’s is his reference point. However, Paul VI stopped his reforms when he discovered certain problems. Open minded, he understood how much he could push and when he had to step back in order to preserve the doctrine of the Church. He did so when drafting “Humanae Vitae,” and also with the reform of the conclave about which he dreamt. Will Pope Francis be able to do the same?