Pope Francis’ Encyclical on Ecology: What to Expect and What Not Will Pope Francis’ Church be able to go Beyond the Secular Agenda? 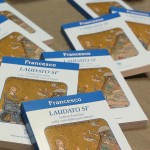 The encyclical “Laudato Si” not only reveals Pope Francis’ thought concerning the social teaching of the Church and good ecological practices. The genesis of its drafting also reveals the world around Pope Francis. True, the Pope makes his decisions himself. But is is also true that there is a world around him, composed of consulters, people who want to be credited with some of the papal affirmations, and others who remain silent but are really behind the papal affirmations. This is a hidden world that emerged a little while “Laudato Si” was being drafted.

On human trafficking, the initiatives of the Academy produced the initiative “End slavery”, while another initiative aimed at helping marginalized people that can also avoid children reduction to slavery is that of the Scholas Occurentes. This latter has led to the signing of an agreement with UNICEF, an organization from which the Holy See earlier on always maintained a certain distance, as it was considered pro-abortion. On ecology and development, the Pontifical Academy seems to be ever more drawn toward an approach to development that has been studied and planned within various United Nations agencies.

On the day before his participation as one of the speakers at the official presentation of “Laudato Si”, John Schulhuber was appointed a member of the Pontifical Academy. He was among those who promoted the ‘ecological manifesto’ at the end of an April 28 meeting on this issue at the Casina Pio IV, the headquarters in Vatican City of the Pontifical Academy. Schulhuber presented the final statement together with the economist Jeffrey Sachs. Both of them spoke about sustainable development. However, in the past both of them had also expressed support for birth control. Pro-life and pro-family NGO’s like C-Fam raised this issue, and Archbishop Sanchez Sorondo responded by publicly defending the concept of ‘sustainable development’, stating that it does not include the birth control issue. However, the question whether to use the term ‘sustainable development’ should still be considered an open one, because among the UN indicators of development, the term is employed in such a way that it clearly implies sexual and reproductive health, code language for abortion and birth control.

On the other hand, Pope Francis is not in favor of birth control. The encyclical contains one clear criticism of abortion (# 120) and another one concerning birth control (#50).

So the encyclical combines progressivist theories on protection of the environment – which imply birth control – with traditionally Catholic issues, apparently without any continuity between the two concepts. This combination makes it clear that there are two poles not only in terms of the discussion around the encyclical, but also in terms of a wider discussion taking place around the Holy See’s diplomatic strategy.

The Secretariat of State has developed its own strategy, and it is a prudent one. Cardinal Pietro Parolin, Vatican Secretary of State, made this strategy clear during the week he spent at the United Nations Headquarters in New York in September 2014. His speeches pivoted on the notion of the ‘duty to protect’, which can be applied to the environment, but also to persecuted Christians. This strategy has been combined with the more extremist line advanced by the Pontifical Academy for Social Sciences in speeches subsequently given by papal nuncios at international gatherings.

This attempt to balance the two positions also proves there is not a unique line of argument in the thinking of Pope Francis. Why is this the case? In order to understand it, one should understand Pope Francis’ modus operandi. A traditionalist in his way of thinking, Pope Francis also has a pastoral approach to issues. He does not advance a given line of argument, he seeks to promote discussion. But this attitude is risky: without a clear line, anarchy can rule.

The problem is even wider. Since the beginning of his pontificate, Pope Francis has put the Church in a sort of state of permanent synod. The establishment of the Council of Cardinals, along with the increasing impact of the Synod of Bishops and the use of Cardinalatial Consistories in order to promote discussion demonstrates the papal will to promote debate over needed reforms.

This debate has led to numerous proposals, and along with them, to lobbying either in support or in opposition to some of them. In fact, no definitive design for curial reform has yet been advanced. During the last meeting of the Council of Cardinals, a series of proposals was discussed, and the Pope agreed to review them. The Commission for Communications – that evaluates and implements the previous work of the Committee for Communications – is now working on a 4-year plan to merge all Vatican media into a single structure. Meanwhile, the Pontifical Council for the Protection of Minors proposed some procedures that will give curial dicasteries as well as local bishops guidelines for the accountability of abusers. Lastly, the creation of new super-dicasteries is at the moment suspended; their eventual erection is taken for granted, but it is still in process.

This scenario provides a crossroad. On one side, there is the huge popularity of Pope Francis, his ability to convince everyone, the interest he attracts from powerful people in the world, his personal charisma. On the other side, there is the structure that requires a reform, not a revolution, but that still lives without reforms, because some players are still clamoring for a revolution.

This problem is mirrored in the encyclical, where there are some innovations (mostly, in method), but still many teachings that accord with the Church’s tradition.

Pope Francis recalls the social Magisterium of his predecessors, and quotes all of them very precisely, thus creating a clear framework that bundles together ecology, climate change as well as many other challenges addressed by the Holy See’s diplomacy during these last years.

The Pope claims the need for a reform of the global financial-economic system, and for the courage to criticize the current state of financial institutions as has been done already in the past; he proposes a strong multilateral commitment, but one that is also in continuity with the Holy See’s long term request for a reform of the United Nations; he sheds light on the importance of the natural family and attacks gender ideology on the basis of the notion of ‘human ecology’ that Benedict XVI had already developed; finally, he asks for an ecological conversion, a notion already expressed by Leo XIII.

However, Pope Francis’ approach and working method are entirely new. The first draft of the encyclical began with a long theological section that in the final draft was moved somewhat further on in the text, in keeping with the Latin American method: to see, judge and put into action. The Pope also often quotes documents of the bishops’ conferences, because he wants to pay attention to the geo-ecclesial peripheries. Finally, the Pope writes in a very simple style and offers many pragmatic recommendations, such as turning off air-conditioners or offering recyclable waste collection.

Beyond this, the teaching of the Church has remained the same. In the constant search for something new, this encyclical in the end risks becoming an instrument to be exploited by various groups according to their own needs.

The same phenomenon occurs in Pope Francis’ pontificate. The real Pope Francis remains hidden from view while the media highlight his words only when they fit in with a pre-written script. There is no media interest in the Pope’s continual appeals on behalf of the traditional family, but there is a lot of interest when he speaks off the cuff and provides journalists with some one or other imprecise statement from which they can find grounds to push for a revolution in the Church.

Certainly, the path to this encyclical was wide. After the first draft prepared by the Pontifical Council for Justice and Peace, and after the Pope’s final draft, someone still had to harmonize various passages and adjust quotations. Some sources suggest that a group of Jesuits, whom Pope Francis trusts, led by Fr. Antonio Spadaro, editor of “La Civiltà Cattolica”, was involved in this work of polishing the papal text. One source suggests that the Pope’s benevolence to Fr Spadaro made him think that Spadaro had been chosen to replace Fr. Federico Lombardi as Director of the Holy See Press Office. Who can say? Certainly, Fr. Spadaro is one of Pope Francis’ most trusted consulters.

In the end, “Laudato Si” mirrors Pope Francis’ two and a half year-long pontificate, in that it is suspended among different interpretations. The Pope was described as a “liberation theologian,” and liberation theologians, like Leonardo Boff (now converted to eco-theology), compete in their claims that the Pope backs their ideas and that they contributed to the encyclical. But Pope Francis is not a liberation theologian; he hews close to the so-called ‘theology of the people’.

The expectations for a revolution in the Church guided by Pope Francis were raised especially with regard to the pastoral care of the divorced and remarried. But Pope Francis’ pastoral views on the family, made explicit by this encyclical, prove for the most part that he is predominantly a traditionalist. It was predicted that the Pope was going to bring order to the Church, but the internal and external dialectics developed under his pontificate are fueling the debates more than they are leading to concrete actions.

In the end, it is better to distrust interpretation, because interpretations may not lead to a complete understanding of Pope Francis’ pontificate. Well educated Catholics are called to read the encyclical through the lense of Church teaching and not to allow it to be misunderstood, because the Magisterium, and not the words of consulters, had the final say in the encyclical. This Magisterium was developed by the Hidden Vatican that works tirelessly within Pope Francis’ pontificate.

Bishop Mario Toso, who served from 2009-2015 as Secretary of the Pontifical Council for Justice and Peace and who oversaw the first draft of the encyclical, commented, “there is no doubt that there were many contributions and suggestions (in the process of drafting the encyclical). On the other hand, it is important to consider that these contributions were put in a framework that certainly was not provided by those single contributions, but was provided by the continuity with the previous Magisterium and from those hands who are perhaps less visible and less outspoken, but who know very well the teaching of the Church and are able to speak of the ecological issue starting from a theological, anthropological and ethical point of view.”

2 Responses to Pope Francis: the world behind ‘Laudato Si’