Pope Francis: The World Youth Day against the World without God 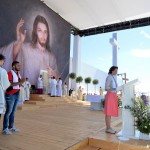 Nowa Huta means “new foundry.” It’s a block of Krakow built around a foundry under the Soviet regime. It was built without God. There was no space nor any possibility to build a church in Nowa Huta. That is, until Karol Wojtyla, then Archbishop of Krakow, involved the people there, brought pressure upon the civil authorities and finally got permission to build a church. It was everyone’s church. It was the response to the world without God.

Nowa Huta is now the world. It is not perhaps by chance that World Youth Day took place in Krakow. Certainly, there are other significant issues: the devotion to Divine Mercy comes from Krakow, and now it is central to Pope Francis’ pontificate; in Krakow, St. John Paul II, the originator of World Youth Day, lived and nurtured his faith. However, the story that in Krakow, a profoundly Catholic city, a block without God was built is one of the most hard-hitting points. In fact, the block without God was no option for people in Krakow. Catholic Poland is still there, 1050 years of Christian roots well rooted in the ground.

Nowa Huta is the world because the whole of society today seems to be built without God. This World Youth Day was marked from the beginning by the assassination of Fr. Jacques Hamel, an old priest, during the final moments of a Mass in the Rouen surroundings in France. Two young people broke into the Church, slaughtered him and held the few people attending as hostages.

The death of Fr. Hamel fell like a pall on the World Youth Day as it was beginning. Immediately, however, Tubideau Dumas, General Secretary of the French Bishops Conference, stressed on July 27 that WYD had to go on, now more than ever. “Facing the hatred, we have to show young people hope, we should show our faith in love.”

The real task of this WYD then immediately took shape. Not by chance, Pope Francis – meeting the young people for the first time at the welcoming ceremony on July 28 – told them, “The Church is now looking at you”, and then he added off the cuff, “The world today looks at you.” This is a clear indication that the seeds of peace which the world so much needs come from the shared Christian experience.

At origin of WYD, during the 80s, it was necessary to show that the Church was still alive and young, that it had not retreated into the catacombs. It was John Paul II’s wonderful idea.

Then, Benedict XVI came along. He understood that the WYDs needed a qualitative leap forward. He wanted WYDs that were not just a show of Christian presence, a big festival in which young Catholics could count themselves. As Christianity was ever more in question, there was a perceived need to get back to the roots, to the adoration of Christ.

This is the reason why, from Cologne 2005 on, the WYD Vigil concludes with a moment of silent adoration of the Blessed Sacrament. The message is that Christ, not the event, is the center. To some extent, this is also a response to a certain theology of political presence, as was liberation theology, which was later concretized in the direction Pope Benedict XVI gave to the Aparecida Conference in 2007.

Pope Francis is now called to make of World Youth Day the place where the presence of God is visible. In a world where Catholicism is ever more being marginalized – as well as all other religions – the gathering of hundreds of thousands of young people united by faith in Christ can give the final sign that Christianity is not just alive, but still has something to propose to society.

Not by chance in his meeting with young people, Pope Francis asked them to make noise and to shock the world, inviting them to be convinced they can be agents of change. Similar words echoed in the catechesis of bishops and cardinals present these days.

An example was provided by Cardinal Angelo Bagnasco’s catechesis. The Archbishop of Genoa and President of the Italian Bishops Conference invited the crowd to make room for God in their heart, and asked young people to be “dissidents” in front of a world that “proposes lies.”

One of these lies is that happiness can be found only within the totality of rule-less freedom, while real happiness – the Cardinal says – is making of God the center of life, and hence to “build a new city,” to “evaluate what is offered to us” and make “alternative proposals” for a new civilization of love.

During the days of the World Youth Day, this appeal was repeated several times, and in a meaningful way. In Krakow, thanks to his faith, and by means of the cultural work that he preferred to dissent, Karol Wojtyla launched that silent revolution which brought Communism to collapse. This revolution is born of a profound devotion, in the discipline of prayer and a strong faith.

During the WYD, young people walked in St. John Paul II’s footsteps, they breathed this same air, and felt how faith can act. It cannot act as a social agent, something to be used at a political level. This is what happened under Communism, happened in Nowa Huta. But Karol Wojtyla’s life teaches that faith is more.

This is not understood, or at least no one wants to understand it. In fact, faith is sidelined as an inconvenient truth, while religion is marginalized.

True, Fr. Jacques Hamel is a martyr. But he is not a martyr of terrorism. He is a martyr of indifference. Since May, attacks on churches have been reported as taking place in France. Moreover, 100 Catholic websites have been hacked by a little Islamist movement based in North Africa, news of which was only broken by the Catholic daily newspaper, La Croix, at the end of May.

Just a few other outlets reported the news, and even fewer got the warning. Despite the fact that Europe is considered the land of rights, these rights do not seem to count when religious freedom is jeopardized. Instead, religion is sidelined to the point that it can be neutralized.

The rationale is that a world without “religious prejudice” is less inclined to be affected by those extremisms that can flow into violence. As the immigration of people belonging to different religious beliefs expands, “Christian Europe” tackled the issue by eliminating religion from public life, rather than by making of religion a pillar of public life. This shows that the values on which European society was built were lacking. They have been replaced by a world with no values, since no one has an identity. Those raised in a culture of indifference give no importance to their life. They even look for an ideal to die for.

This rationale is put into practice in many ways. Belgium is the latest example. There, neutralization of religion is carried forward via a law that cuts religion classes by half in order to introduce a class on citizenship one hour per week. This class can be taught only by teachers who are considered “neutral,” meaning free of any religious prejudice. This prejudice is measured even by the kind of university teachers attended – if they attended a State university, but one that is of a Catholic inspiration, they are considered non-neutral.

Societies without values are born this way. Religions are out of place in these societies. For their part, religions step back, sort of timidly accepting a society unable not only to diffuse values, but to defend everyone’s right to have a value.

Pope Francis is clear in thinking that religions are the solution, and not the problem. Recently, Vatican diplomacy has played up all the more the role of religions in building bridges toward peace – this is another phrase Pope Francis loves.

In fact, there is an even bigger challenge: that of considering religion not as a political factor and a possible means to unite society, in which case, religion is only considered a tool. Instead, the real challenge is to show the world that faith cannot be exploited. Faith transforms people’s lives and fills them with sense. Only when everyone’s life is filled with meaning, can there be real solidarity.

This is the long way off, and it is underestimated. Right after the Rouen attacks, French President François Hollande made a phone call to Pope Francis to assure his support, and then he convoked the representatives of religions at the President’s residence to ask for cooperation. This way, he treated religious representatives as political and social actors.

This is just the latest example. After the prayer for peace in the Vatican Gardens in June 2014, Shimon Peres, who had just finished his term as President of the State of Israel, went to Pope Francis for a private meeting and presented him with the idea to establish a “United Nations of Religions,” begging for the influential Pope Francis’ support. Pope Francis thought about it. But the approach revealed the intention to use religions as political and social actors.

Catholicism is not, per se, a political and social actor. But it turns into one the moment when following the principles of the Gospel and faith in Christ changes people so that they commit themselves to building a better world simply because of the love of Christ.

This is not a mere change of perspective. The secular world without God paradoxically made the world more dehumanized, so dehumanized that there are those who believe that his life is worth so little that it can be lost in the act of killing others. This is a religion of death, not true faith. Not by chance, Pope Francis made it clear that “we are at war, but this is not a war of religion.”

So, the World Youth Day in Krakow might be the antidote to the Nowa Huta world. The absence of every religious reference always brings man to believe in death and to live a negative religion. “There is something demonic in these mass killings of Christians,” underscored Fr. Paolo Asolan, professor of Pastoral Theology at the Pontifical Lateran University, after he visited Egypt and there met the family of Milad, one of the 21 Coptic Christians beheaded on a beach in Libya.

Fr. Maximilian Kolbe understood it. He died in Auschwitz, giving his life to save another. In his short life, as a missionary to Japan and then in martyred Poland, he worked to spread faith by all possible means. He used mass media, started magazines. He understood before any other that secularist ideology could be the destruction of Europe. That ideology came from Masonic thought (which in turn took a great deal from Luther’s freedom of conscience) that fired the French revolution and overturned monarchies. Fr. Kolbe fought that ideology with devotion and prayer.

When Pope Francis, in Auschwitz, silently paused by the bunker where Fr. Kolbe died, the lines of history encroached. In front of Fr. Kolbe, who gave his life for others, the mission of this World Youth Day can be fully understood: bring seeds of peace to a world at war; and bring back the joy of faith as has no theological debate, not even that debate which recently showed its inability to respond to this crisis in the way we are living it.

3 Responses to Pope Francis: The World Youth Day against the World without God