Pope Francis, the clues of his modus operandi Pope Francis, gestures as a response to the institutional crisis 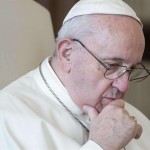 There are three key words of Pope Francis’ pontificate, three terms around which many of the Pope’s decisions revolve: synodality, clericalism, and abuse.

These three key words probably say much more about the government of Pope Francis than do the expressions that instead immediately caught on in the public opinion, such as “the outward-looking Church,” “the Church in a state of permanent mission,” “the field hospital church. ” While these are Pope Francis’ communication formulas, the way he wants his thinking to be understood and put into practice, the key-words represent a style of governance, a worldview, and a direction towards the future.

The first key-word is synodality. Since the release of the apostolic exhortation Evangelii Gaudium, considered the programmatic manifesto of the Pontificate, Pope Francis has made it known that he wants to support the local Churches. In Evangelii Gaudium, it was even hypothesized that some functions of the Congregation for the Doctrine of the Faith could be given to local Churches.

This idea of synodality is publicized a great deal. It includes various gestures: the establishment of the Council of Cardinals, international summits such as the February 2019 abuse summit, even, for a period, a new form of ad limina visit in some particular circumstances, not to mention initiatives such as the meeting with the Synod of the Ukrainian Greek Catholic Church.

The Pope’s importance to an institution such as the Synod of Bishops, whose secretary-general is always a cardinal —and with pope Francis one of the first cardinals created— should not be forgotten.

But is it true synodality? There is the idea of a Church in a state of permanent synod, with “open” documents such as Amoris Laetitia, which sets everything on personal discernment without, however, completely closing the question. Pope Francis, however, acts as a man of government who decides everything by himself and who uses all the prerogatives of being Pope. He does it in the Vatican City State trials (which he authorizes in a summary way), but he also does it when he makes decisions about the Church. Often, it is thought that the Pope is going in one direction when he then shows that he takes an entirely different point of view. The abuse summit is an example of this. After days in which it seemed the Pope was all on the side of anti-Church public opinion, he himself made a concluding speech that did not fail to criticize the media for the way they emphasized even false accusations against the Church.

Synodality is a form of government, but probably only the first step in a process and certainly not the last step. Sometimes, this first step is not even heard. But the idea of a synodal Church seems to be winning, and therefore it is used. Even the Italian Conference of Bishops, which also recently met in General Assemblies, has now been almost forced by Pope Francis to think about the idea of a national synod, which would not be very different from national assemblies if not in name and structure. But so be it.

The second key word is clericalism. Pope Francis has always said he wanted to avoid the typical defect of always looking up to priests, giving priests an exaggerated importance that can turn into an exercise of power for the priests themselves. The result is that everything risks being defined clerical, in a Curia that in any case has its own rules and that looks to the bishops as hierarchical leaders.

Recent cost containment measures, which cut salaries only for clerics who work in the Vatican, also show this Pope’s need to show that, after all, priests do not have privileges. If you are a priest or religious, you do not need a salary, which can be cut even if that salary helps a small religious congregation to live. Even if with that salary, a priest could support someone, help the poor.

The salary cut for clergy members, however, comes from an ideological matrix. Priests are those who have privileges. Therefore privileges must be taken away from priests. It is not a provision that will alleviate the expenses of the Holy See. External consultancy is not cut. Executives are only touched on the primary contract without touching the additional salaries from contract to margin. The Institute for Works of Religion (the IOR, the so-called Vatican bank) maintains its type of remuneration, not that of the Holy See’s normal levels. The cardinals lose 10 percent of the cardinal’s plate, which varies greatly depending on the area, and which has a significant impact only on Curia’s cardinals.

Priests are called to lead by example, to renounce their earnings, and they are obliged to do so. This, however, will have a minimal economic impact. In contrast, it has the effect of demonstrating Pope Francis’s slap in the face to many employees, ecclesiastics, who have dedicated their lives to the Holy See.

The fear of being accused of clericalism is so great that the measures seem to have been made on purpose to put the clergy in difficulty. There is a profound mentality that Pope Francis showed in his 2013 Christmas greetings speech on diseases in the Curia.

This fear adds to the fear of being accused over the abuse issue. And abuse is the third key-word. Abuses are the newspaper’s tool for attacking the Church. Any abuse must be reported, emphasized, and used against the Church itself.

Pope Francis’ approach was that of a publicist type. The Pope wants to show that there is a fight against abuse concretely. He did so with the abuse summit in February 2019, which then led to the modification of new Vatican regulations. He has done so, more recently, by including Juan Cruz as a member of the Pontifical Commission on Child Protection – Cruz, an avowed homosexual, is a survivor of abuse in Chile. He does so when he stresses that he will never pardon an abuser.

It is an answer that looks a lot to the media eye, and that general bias exists when it comes to the Church. Yet, the Pope’s attitude towards the problem allows these attacks to continue, even when manipulated and funded with outside money. The Pope makes no distinctions. He wants to show that he is a Pope who knows how to fight abuse.

The fact is that talking about abuses, and talking about it in a certain way, has also become inevitable for some Catholic press. Thus, while the Pope defends his image and tries to ensure that the Church’s ideas will be supported this way, it happens that even Catholic journalists attack the Church on the issue of abuse without ever going into depth.

5 Responses to Pope Francis, three key-words of the pontificate