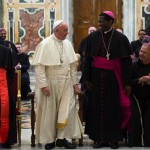 If it is true, as it is, that Pope Francis’ real reform is that of the profile of bishops, this reform can be carried out because this Pontificate is also taking place in a moment of transition. There are many bishops who have reached the age of 75 —when, according to canon law, they have the retire.

The appointment of Archbishop (to be created Cardinal) Giovanni Angelo Becciu as prefect of the Congregation for the Cause of Saints is one of the many pieces of an ecclesiastical domino effect that began long time ago, inside and outside the Curia.

Archbishop Becciu will replace Cardinal Angelo Amato, who will turn 80 next June 8. It is even more noteworthy that the current Deputy for the Secretariat of State will take the new position in September, and in the meantime he will keep the post as the Pope’s delegate for the Order of Malta, although the new Grand Master of the Order has been recently appointed: this is a sign that the Pope does not want to let go of the Order of Malta issue.

After Archbishop Becciu assumes his new position, the post of deputy will become vacant. At the moment, the rumor is that the choice is between nuncios Nicola Girasoli and Giordano Caccia, respectively Pope’s ambassadors to Peru and the Philippines.

In general, nunciatures have had a big turnover.

Among the latest appointments, that of Polish archbishop Marek Zalewski as nuncio to Singapore and non-resident pontifical representative to Vietnam. He has been nuncio to Zimbabwe since 2014, and he is the successor of Archbishop Leopoldo Girelli, appointed in September as Apostolic nuncio to Israel and Cyprus, and apostolic delegate to Jerusalem and Palestine.

The Nuncio to Singapore is particularly important because of the Holy See relations with Vietnam. Since 2009, the Holy See and Vietnam are committed in a bilateral table to open diplomatic ties. Bishops in Vietnam are appointed in agreement with the Vietnamese government: there is a round of consultation with bishops and clergy, and then the nuncio presents a set of three possible candidates to the Pope; the Pope makes his decision, and after that the decision is communicated to the Vietnamese government, that gives its placet. Sometimes, Vietnam has been described as a possible model for the appointment of Bishops with China. However, it seems that this will not be the model, because the Chinese government wants to keep control over the appointment of bishops.

Even the Vietnamese dioceses are living a transition. Cardinal Pierre Nguyen van Nhon, Archbishop of Hanoi, turned 80, while there are two dioceses vacant: the Archdiocese of Ho Chi Minh after the death of Archbishop Paul Bui Van Doc in March; and the diocese of Phan Thiet, because of the death of Bishop Joseph Wu Dui Thong.

The new nuncio to El Salvador is Archbishop Santo Gangemi, that was until now nuncio to Guinea / Mali. He replaced Archbishop Leon Kalenga Badikebele, who was appointed in March as “papal ambassador” in Argentina. Archbishop Gangemi should soon also be appointed as nuncio to Belize.

At the moment, there is just an Apostolic nuncio that is 75: Archbishop Giuseppe Leanza, Pope’s ambassador to the Czech Republic. Beyond Belize, nunciatures to Liberia / Gambia / Sierra Leone, Pakistan, Uruguay, Hungary, Ivory Coast, Zambia / Malawi, Zimbabwe, and Guinea / Mali are vacant.

It is foreseen there will be a new turnover of nuncios, with new positions assigned.

Regarding the local Churches, the Italian situation is peculiar. Pope Francis has confirmed until 2020 Archbishop Francesco Cacucci of Bari – Bitonto, who recently turned 75.

There are four vacant sees in Italy: that of Grottaferrata abbey, the diocese of Palestrina, the position of archbishop vicegerente (the deputy of the Vicar) of Rome, and the diocese of Manfredonia-Vieste-San Giovanni Rotondo.

The most important position is that of “vicegerente” in Rome, considering that the current Pope’s vicar, Archbishop Angelo de Donatis, will be created cardinal. There is speculation about a mini-reform of the Rome vicariate, considering that Pope Francis appointed 8 auxiliary bishops, many of them for specific purposes.

The Pope is very attentive to the situation in Venezuela. It is likely not by chance that two archdioceses of Venezuela were given a new archbishop only after the presidential elections, probably to avoid any political instrumentalization.

Pope Francis also appointed Bishop José Luis Auzaje Ayala as Archbishop of Maracaibo. He was Bishop of Barinas, and he succeeds Archbishop Ubaldo Ramon Santa Sequera, 76, who was the only bishop belonging to the Congregation of the Missionary Sons of the Immaculate Heart of Mary, that has only about 90 priests.

After these two new appointments, the only Venezuelan archbishop above 75 is Cardinal Jorge Liberato Urosa Savino, archbishop of Caracas. Barnas is the only vacant see in Venezuela.

For what concerns the Roman Curia, the appointment of Archbishop Filippo Iannone as president of the Pontifical Council for Legislative Texts started the Curia reshuffle.

As is the case with the Prefect of the Congregation for the Cause of Saints, there are several heads of Vatican dicasteries who have surpassed the age limit of 75.

Until now, Cardinal George Pell and Cardinal Giuseppe Bertello had been extended at their posts: Cardinal Pell will stay in charge until 2019, Cardinal Bertello will keep the post until 2021; Cardinal Ravasi had a 5 years extension of his term, so he will quit in 2023; Archbishop Sanchez Sorondo’s term has also been extended, while Cardinal Amato will turn 80 and will leave the post.

There are still some vacant sees even in the Roman Curia: that of Prefect of the Secretariat for Communication (now Dicastery); that of Promoter of Justice of the Rota Tribunal; and that of the undersecretary to the Dicastery for Laity, Family and Life, whose new statutes have been recently published.