Is the Jubilee of Mercy the Real Face of Pope Francis’ Revolution? Pope Francis: Will His ‘Revolution’ Be Effective?

Pope Francis to the United Nations: Which Diplomacy? 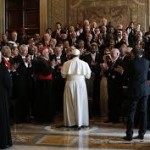 Pope Francis will speak at the United Nations Headquarters in New York this coming September 25. United Nations confirmed the papal address last week, thus making official one of the most important moments of the coming papal trip to the United States in September. The trip will last one week, and will culminate with Pope Francis’ attendance at the World Meeting of Families in Philadelphia. However, the trip will be particularly important because of the speeches Pope Francis will deliver to the US Congress gathered in plenary session – he will be the first Pope to speak there – and to the General Assembly of the United Nations.

Pope Francis’ speech to United Nations will represent a crucial moment for understanding his approach to diplomacy. There are multiple risks behind this event, as can be seen in the case of the Pope’s speeches on November 25 first to the European Parliament and then to the European Council. On that occasion the Pope spoke about human rights, defended the natural family, attacked the culture of abortion and highlighted the dramatic consequences of poverty and social imbalances. At the same time his visit to the European Parliament did not include a moment of prayer – a fact that permitted radical secularists to promote the notion that the Pope is a Head of State like any other, but nothing more. The Pope’s references to transcendence were cut out completely from the  European Parliament summary of the speech, delivered as a release to Member of Parliaments and workers.

It is likely that a similar manipulation will take place following the papal address to the United Nations. Archbishop Bernardito Auza, Permanent Observer of the Holy See to the United Nations in New York, anticipated that the Pope will certainly speak about poverty and social exclusion, as the Pope always asks him about these issues. How he will do so is yet to be clarified. Certainly, he will not speak off the cuff, aware as he is that every word is important. So extemporaneous statements that have contributed to Pope Francis’ fame – and at the same time raised concern among many Catholics – will not be uttered.

Pope Francis’ address to United Nations will therefore be a test to see how the complementarity between papal language and diplomatic language works. The Pope does not like prepared speeches, and he does not structure them in great detail. Instead he aims at reaching out to people’s hearts, without caring about possible implications. A friend of his explained that “if he has to concede something to populism, he will do so if he thinks it will draw more people to the Church.”

His spontaneity may be detected especially when he speaks during in-flight pressers – since in these circumstances he is too tired to pretend or to think too much. Another example is provided by his homilies at his daily Mass in the Domus Sanctae Marthae. During these homilies he speaks without any filters, and he always says what he really thinks.

By reading his words carefully, we can understand how the Pope wants to promote an inclusive approach to pastoral care. When he said, “Who am I to judge?” in speaking about homosexuals, he was not aiming at changing the Church’s doctrine, but was merely underscoring a common sense approach, as is found in the 1985 Congregation for the Doctrine of the Faith document on homosexuals. When the Pope said that “Catholics should not breed like rabbits,” he was simply underscoring the issue of responsible parenthood that the Church has always taught. When in the March 17 homily he reiterated that “Jesus welcomes everyone,” he was not speaking about divorced and civilly remarried or homosexual couples, but wanted to underscore how the Church includes everyone. Each of these sayings must be read through the lens of “primarear,” that is, that Jesus always precedes us. This topic is as pivotal as that of mercy in this pontificate. Looking for further meanings behind Pope Francis’ statements means over-interpreting him.

The language of the Holy See, on the other hand, tends to balance the straightforward, and sometimes contradictory statements of Pope Francis. The Secretariat of State, lead by Cardinal Pietro Parolin, is grounded mostly in prudence. Cardinal Parolin always speaks about the need to carry forward a dialogue with every party. Diplomatic prudence is therefore his watchword. On the Ukrainian situation, a very delicate one because of the Vatican’s relations with the Orthodox Church in Moscow, the diplomacy of the Holy See avoided taking a strong stance that would arouse critics. Nor did the Holy See intervene in the Venezuelan crisis. It also practiced prudence in its approach to the “Caliphate” and Islamic State. The diplomacy of truth, with its strong and definitive condemnation, was left to the Pontifical Council for Interreligious Dialogue, while the Secretariat of State kept on urging dialogue.

This is how papal speech and diplomatic speech are balanced and intertwined. The Pope’s discourse is Peter; the diplomatic discourse is Paul. Between Peter and Paul is a link between pastoral care and diplomacy, between being Church and being a sovereign State at the same time. Today’s world longs for a clear message from Pope Francis, while the diplomatic world expects the prudent activity of the Secretary of State, Cardinal Parolin.

So the world of Pope Francis’ Christian and straightforward declarations does not exclude diplomatic language. Institutional prudence is needed to mitigate the effects of Christian simplicity. But this simplicity proves that Pope Francis puts into action the Gospel’s paradigm – “May your discourse be, ‘Yes, yes’ or ‘No, no’.” (Mt 5:37)

This paradigm may certainly be elevated to more sophisticated models, as happened during the famous Regensburg lecture of Benedict XVI. That lecture was logical, clear, straightforward, reasonable and at the same time not diplomatic, so much so that it sparked discussion. But because it was so strongly connected with truth, the lecture fostered a new dialogue with the Muslim world, and a Muslim-Catholic forum has been established and meet regularly.

It is yet to be seen how Pope Francis will bring his pastoral simplicity to the international arena of the United Nations. Perhaps his simple – sometimes simplistic – language will prove to be an opportunity. But the issues at stake are deeply divisive, and a truth-based approach may harshen things. Will Vatican diplomacy find a way to highlight the issues at stake without creating a new cultural war?

The search for a new approach is evidenced by Cardinal Parolin’s wish to establish an Office for Pontifical Mediation within the Secretariat of State, thus making more visible the Holy See’s efforts in this area. But at the same time a new approach was recently demonstrated by the effort of the Permanent Observer to the UN Office in Geneva, Archbishop Silvano Tomasi, to gather 63 States in a joint declaration that addressed for the first time the issue of persecuted Christians. Archbishop Tomasi stressed this new approach, and certified the use of military force as a last resort for extreme cases, but only after a sincere attempt to seek a resolution through dialogue.

The search for a new approach is also evidenced by the way the ecological issue is now being addressed by the Vatican, an issue that is crucial for Pope Francis. The coming encyclical on ecology is much anticipated, but in the meantime, the Pontifical Council for Justice and Peace has fostered a network response to the problems in Amazonia that also involved developed countries which, for the first time, were not asked only to provide funds.

The search for a new approach is also exemplified by the way gender ideology is faced. Pope Francis labeled it as demonic in a private meeting with the Austrian bishops, but he barely makes a public intervention on the topic. Instead he leaves the issue to courageous bishops like the Archbishop of San Francisco, Salvatore Cordileone, now a target of LGBT groups because he asked the employees of Catholic institutions to adhere to Catholic morality.

Gender ideology mostly targets the notion of the traditional family. Pope Francis – who made prayer his favorite diplomatic tool – responded with a pastoral approach which led him to embrace the idea of a synodal path to the family. But this synodal path was hijacked and focused on topics like same sex marriages and divorced and civilly remarried people – even though these issues are not pivotal.

The renewal of the Church will eventually take place through the efforts of individual bishops. The big questions arise only at the peripheries, in small communities, where the social teaching of the Church is put into action. Only courageous bishops will succeed.

In the end, another decision of Pope Frances seems to be prophetic: that of sending Bishop Mario Toso, former Secretary of the Pontifical Council for Justice and Peace, as bishop of the small Italian diocese of Faenza-Modigliana. During his Installation Mass, Bishop Toso described a model of collaboration between State and Church based on the common good and on the pursuit of integral human development, with the path toward a new humanism coming from below. All bishops are called upon to promote this approach in this most difficult season for the Church.

Pope Francis is aware of this. He underscored that “many want to hide the persecution of Christians,” while blaming the attacks on Christians in Pakistan. This persecution does not take place only in highly visible way, but also in a hidden way. And so, too, Peter and Paul, the pastoral and diplomatic approaches, must seek out new models of Church. They must turn back once again to small communities in order to spread the Faith. And in this strategy lies the greatness of the Holy See.

3 Responses to Pope Francis to the United Nations: Which Diplomacy?