Here is why Pope Francis’ trip to the UAE is Benedict XVI’s vindication Pope Francis, on background

Pope Francis, toward the final reform? 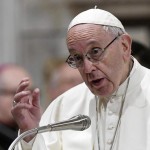 The new statutes of the Vatican general auditor, in effect since Feb. 16, can be considered a further step in Pope Francis’ path of reform. However, their release also shows that reforms are really made on the go, with trials and errors. The way the statutes are drafted, then, show also a recognition that there is no need to dismantle the Vatican system, but rather to perfect it.

The rationale of the necessity to dismantle the Vatican system, starting from economic reforms, dates back to the beginning of the Pontificate. It was said: structures do not work, so they have to be changed. And it was said further: structures are corrupted, so it is better to build them up again, from scratch.

This discussion was part of many of the pre-Conclave meetings. The outcomes of those discussions have been interpreted as Pope Francis’ mandate. Many of the speeches actually dealt with the economic sector.

In the beginning, it was also said that the Institute for Religious Works, the so-called Vatican bank, had to be abolished. The Vatican economic sector was later redesigned with the motu proprio Fidelis Dispensator et Prudens, that established the Council for the Economy, the Secretariat for the Economy, and the office of the General Auditor.

There were many initiatives left undone. The establishment of a Vatican Asset Management was foreseen in order to generate revenues, but in the end it was not set up. At the same time, Cardinal George Pell denounced that Vatican dicasteries had millions tucked away, and that those millions had to be returned to the Vatican.

It is obvious that the first the decisions had to be groundbreaking. Even the hiring of Pricewaterhouse Cooper as an external auditor to review the Vatican balance sheets was made in order to break with the past. However, that hiring was the first clue that a new balance was needed.

It was noted that the external auditing could not take place before the end of the internal review, still not completed. In the end, Vatican City State is, in fact, a State, and its internal finances cannot be subjected to any external review. No State would allow this for their own finances.

The new Statutes for the office of the general auditor has closed all the issues that were still pending: the IOR was not shut down, and the review of the IOR accounts were completed and showed how good was the work already done in the past (as proved by the 2012 MONEYVAL report). The general auditor is now fully inserted in the Curia framework. It has become a State entity.

That the auditor is a State entity is certified by the statutes’ references to the General Curia Regulations, and by the fact the reporting procedures involve all the proper Vatican entities (starting from the Financial Intelligence Authority): the auditor is not any longer established as an independent and autonomous entity. It is now an entity with a specific reference, the Council for the Economy.

Vatican News rightly noted that the Auditor has more power, and that the statutes note that he can ask for and get all the documents he may need (it was slightly different in the 2015 statutes). The authority of the auditors is key for access to documents of eventual external auditors.

This reform cannot be considered a setback, though it is one of the many steps back that have taken place during Pope Francis’ pontificate. So, what is really the situation?

The secular media considers it a setback, as expectations were so high for this pontificate. From the Vatican point of view, it is not a step back. It is rather a step forward to outline a Vatican system tailored to fit the peculiarities of the State.

The narrative of the “setback” was in fact exploited when a new anti-money laundering Vatican reform was issued in 2012. Riding the wave of the setback were mostly those who had promoted a new law too closely based on Italian laws, notwithstanding the Vatican peculiarities. The reform of the law was instead requested by the Council of Europe’s MONEYVAL committee. Following that reform, MONEYVAL always looked positively upon the Holy See.

In general, Pope Francis’ pontificate was accompanied by reform expectations that did not take into consideration the Holy See peculiarities. The expectations were mostly an outcome of external pressures, and also emerged as a reaction to several scandals spread by the media.

Dismantling, in the end, is never an intelligent move, if there is not a vision. It is yet to be assessed what is the vision of Pope Francis’ reform.

Pope Francis always speaks about a missionary Church, outward bound. In support of this missionary push is the new apostolic constitution to regulate functions and offices of the Curia, “Praedicate Evangelium”. Pope Francis always warned about the corruption of the heart, and there is in this constitution an attempt to prevent it with some measures – one of those is that of limiting at 5 years all the terms for Curia positions, in order to avoid careerism.

The issue with the reform is that there was not a unitary vision. It was carried forward while walking, as Pope Francis likes to do. This led to several adjustments, and some of these adjustments revealed a return to the past.

The very Council of Cardinals’ discussions were often preceded by Pope Francis’ decisions. The Pope, de facto, already made concrete the reform establishing new dicasteries like the Secretariat for the Economy and the dicastery for Communication, or merging several dicasteries in the Dicastery for Laity, Family and Life and the Dicastery for the Service to Integral Human development.

However, it seems that Pope Francis and his counsellors always begin with the idea of starting from scratch, without considering the existing structures (that have a meaning), nor having a plan to establish new structures.

This principle also led to the project of shutting down the Prefecture of the Pontifical Household and the Apostolic Camera, without planning the establishment of new structures to cover their duties, or the transfer of some of its competences to other structures. The appointment of Cardinal Kevin J. Farrell as Camerlengo, the reform of the Prefecture for the Pontifical Household that led to the lost of control over the Sistine Chapel choir, indicate that this idea has been halted. If, however, these possibilities re-emerge, there would also be a need to think about a new organization.

The church is not a company, and this is often overlooked. This means that the abolition of a structure does not merely mean to abolish a body to be replaced.

Shutting down an entity means an end to a part of the history of the church, filled with a religious meaning, and a deposit of meaning that is more important than any structure. Shutting down the prefecture would not just mean shutting down a protocol office. It would mean setting aside a series of religious meaning connected with the way the Pope receives heads of State and important people

These are the general difficulties of the reform. The Vatican Financial reform, adjusted as it has been in these years after the first changes, is a clear example of these difficulties, as are the new statutes of the office of the general auditor.

This is food for thought, aside from any alleged or real scandal connected with the auditor (the auditor position is currently vacant, and the former auditor was fired over grave allegations he always rejected).

The crucial point is that every reform needs to be consistent with the Church’s history and meaning. This is the most difficult part of the job.

Everybody is waiting to see how the new Apostolic Constitution will fare. The Council of Cardinals is meeting Feb. 18 – 20. After that meeting, more will come.