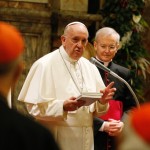 It has not yet been officially announced, but on December 21, Pope Francis should meet with the Roman Curia employees for Christmas greetings, Covid restrictions permitting. It is awaited with expectation, because it is through this speech that Pope Francis could definitively mark the new phase of his pontificate.

What would this new phase consist of?

First of all, the Pope should definitively outline the reform of the Curia. The text of the constitution has been under review for months, but much of the reform has already been implemented without waiting for a real institutional framework. Pope Francis, however, may want to secure the reform with a programmatic speech. After all, in the past, he had already concentrated on what had been done, retracing in detail all the steps taken.

In this case, however, there will also be a push towards the future. 2020 was the year of uncertainty due to COVID 19, but also of the financial scandals that significantly affected the Pope. And it is not certain that the Pope will not mention the sale of the Sloane Avenue building by the Secretariat of State. He did mention it in the motu proprio that ordered the transfer of all funds from the Secretariat of State to the Administration of the Patrimony of the Apostolic See. It was a provision that could have been part of a general project to overhaul the management of the Holy See’s sovereign wealth funds, which, however, appeared as a sort of punishment on the Vatican Secretariat of State. Will this appearance of punishment also transpire in the speech to Curia employees?

In the past, Pope Francis did not hesitate to highlight curial diseases, to ask Curia employees not to be “state clerics,” to personally take matters into their own hands to set the tone for any given narrative.

How, then, could this speech be different from the others? It is because things are changing. Seven years after the beginning of the pontificate, Pope Francis does not only has in his hands a reform of the Curia, but also a Curia to be overhauled, with six out of nine congregation leaders who have exceeded the age limit of 75 and are therefore called to retire.

Therefore, this will be the Pope’s last speech to a Curia that is not entirely in his image and likeness. Many dicastery heads were carried over from the pontificate of Benedict XVI; others were elevated through internal promotions under Francis, but they had already worked at high levels in the previous pontificate. This year, each word will be important because it will serve to take a picture of the situation and to look to the future.

What will the future be like for Pope Francis? This is a more difficult question to answer. We know, in general, that Pope Francis wants a less institutional and more pastoral Church. However, Pope Francis uses the weight of the institution of the Church when he needs it. He behaves like a ruler, even though many of his actions could endanger the institution’s sovereignty.

These are not impromptu questions. Despite his driving force towards the future, Pope Francis often chooses collaborators anchored in the past, with a mentality that is sometimes more local than international, and in some cases with potential criminal records that could create problems – see the example of the archbishop Gustavo Zanchetta, for whom Pope Francis made the ad hoc position of councilor at APSA. Is it possible that there are people who try to manipulate the Pope among these collaborators and consultants? And is it possible that, always among the same people, some are taking advantage of the situation to pursue their own interests?

These are questions that remain outstanding while Pope Francis continues to look straight into the future: he will be in Iraq in March 2021; it seems he will also travel to Serbia and Kazakhstan next year, following the instinct to go where the Christian presence is a minority or where it is persecuted.

There is also talk, more and more insistently, of an upcoming consistory that the Pope could convene next February. The Pope could create other cardinals, considering that at the end of the year, the number of cardinal electors would drop again to the limit of 120 (there are currently 128, 8 above the limit established by Paul VI and confirmed by John Paul II).

Beyond the expansion of the electoral college, the Pope’s will is to have a consistory for discussion, as there have been only two in this pontificate. The debate would focus on reforms. The idea is that, in this way, the cardinals’ endorsement of Pope Francis’ reforms will strengthened his position in the face of the harsh criticism that they have received in many quarters.

Will 2021, therefore, be the year of the Pope’s final “acts of force” to bring his project to fruition? It would seem so. Many clues should come from the greetings speech that the Pope will give to the Roman Curia. More than ever, the address will be very carefully drafted.