Pope Francis, towards new rules for the sede vacante? 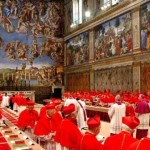 The Council of Cardinals that took place online June 21 was, in some ways, an extraordinary meeting. Not only because it lasted a relatively short time (less than an hour, according to the official statement) when in general cardinals meet for three days. It was striking that there was talk of the application of the Praedicate Evangelium or the reform of the Curia, but also of the organization of the next Consistory of 29-30 August.

Nothing was said about this Consistory, which, as we know, is the first ordinary public Consistory that Pope Francis has held since 2015. At the time, like nowadays, there was talk of a reform of the Curia. So this is a sort of closing of the circle for Pope Francis. The Consistory almost seems to represent a way of handing back to cardinals the mandate they entrusted to him.

One has to be careful with the terminology, however. There can be no pontificate with a mandate, and there can be no political agreements. And if it is true that in the history of the conclaves, these agreements were then informally made and respected – an example was John XXIII, who immediately appointed Domenico Tardini as secretary of state – there is nothing formal. A pope is a pope, and the Holy Spirit elects him. He does not have an earthly mandate, even if it would come from cardinals.

Having said this, it is known that the election of Cardinal Jorge Mario Bergoglio as Pope originated and was discussed during the General Congregations, or rather the pre-conclave meetings. All the cardinals participate in these meetings, even those who will not be able to be part of the Conclave because they are over eighty years old.

The general congregations are a great exchange of views on the life of the Church. During these meetings, the cardinals get to know each other, look carefully at their confreres, listen to their ideas, and begin understanding the significant challenges and what they think is necessary for the Church. Men cardinals get to know other men cardinals, outside the formality of their office, in the secret of a discussion that can be heated.

The general congregations of 2013 were characterized by widespread discontent. There was the desperation of those who felt abandoned by Benedict XVI, shocked because they would never have expected such a decision, unable to look to the future. Some had always worked behind the scenes of the pontificate to attack him, circles of power that had flourished during the latter part of John Paul II’s pontificate and who, with Benedict XVI, had suddenly found themselves on the wrong side of history. And some looked to the future, analyzed the problems, and wondered what would be needed for the Church.

The need to reform the Curia came out a little from all circles. We had just emerged from the Vatileaks case, and there was a sense of a Church under attack. Over the years, drafts of Curia reforms had circulated, and there had been various ideas that were then reinstated. We immediately spoke of the so-called “council of the crown,” which Pope Francis later made into the “Council of Cardinals.”

The original idea was to have greater collegiality in the decision-making process, bringing together the cardinals present in Rome more often. Hence, there was a need for a council to assist the Pope in making decisions. Pope Francis interpreted the idea as the possibility of giving a push to the system, broadening the decision-making bases, and, above all, looking beyond the Roman Curia. It was the first step towards an ever greater externalization of decisions.

It was also necessary to know how to break with the “it has always been done this way.” It was even thought that the Pope wanted to close the Institute for Works of Religion, the so-called “Vatican bank,” until it was realized that it was indeed helpful to the Holy See.

The reform of the Curia has, however, represents a decisive break with the past, and not so much concerning the organization of the dicasteries as with some historical situations that now change forever. For example, after centuries of honorable service, the Apostolic Chamber no longer exists except for a commission chaired by the Camerlengo and composed  by the President of the Council for the Economy and other two cardinals.

The decision to have the Camerlengo and the President of the Council for the Economy is a compromise with respect to the initial draft, which provided that the Camerlengo would be the minister of the Economy by right. The point is that, for Pope Francis, the sede vacante is only an administrative management issue; it loses all the ritual and the exceptional character of having the see of Peter vacant.

There is, therefore, a need for new legislation on the vacant seat. Of course, a simple change in the bill could be made, replacing the term “Apostolic Chamber” with “Camerlengo’s council.” It seems, however, that the Pope is thinking of a broader reform of the legislation that regulates the vacant see and the election of the new Pope, and that he would also have mentioned it at the meeting of the Council of Cardinals.

What does this new legislation consist of? First, it is said that the Pope wants to abolish the General Congregations, effectively cutting all cardinals over 80 from the electoral process. At the same time, he would like to increase the number of cardinals who can vote in a conclave: the law sets them at 120, even if the Pope can execute waivers at his discretion. In fact, we are at 126. Pope Francis could bring them to 130 or 140.

Instead of the general congregations, the Pope might organize cardinals in groups, like during the synods, and each group would have a relator that would, in the end, report. One counts one in the vote, but the relators actually guide the discussion.

It remains to be seen whether Pope Francis will also change the voting process. Benedict XVI had determined that two-thirds of the cardinals’ votes would always be needed to elect the Pope. Before, the threshold would be lowered after several ballots. Benedict XVI’s idea was to prevent overly political agreements. Pope Francis could instead establish the possibility of lowering the threshold for the election in the event of a stalemate. The idea would be not to keep voting for too long.

These are all speculations, and there is no way to know if they will be proven correct. These rumors, however, are ubiquitous, proof that these speculations are not far-fetched. In reality, we are faced with an unpredictable moment in history. A sort of a vacant seat of the Curia, amid a reform of the Curia not yet completed with respect to the selection of its ranks, combined with the possibility of a sede vacante.

Everyone’s eyes are fixed on L’Aquila, where the Pope will go on August 28 for the Celestinian Forgiveness events. Celestine V renounced the pontificate, and Benedict XVI paid homage to him by placing his stole on his tomb in L’Aquila, which foretold his renunciation. Pope Francis set the trip as early as February, then built the Consistory around the trip. There are expectations. It may be that nothing happens. Perhaps a new document will be signed there. After all, the Pope likes these symbolic choices, so much so that he went to sign the Fratelli Tutti in Assisi.

It is now a question of waiting and seeing. And, for a journalist, to speculate a bit as part of the game.

6 Responses to Pope Francis, towards new rules for the sede vacante?