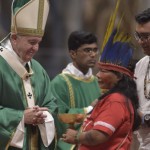 Some thought that the post-Synodal exhortation of the Special Synod on the Pan-Amazon Region would have come out before Christmas. A date was rumored: December 18th. It would have been a surprise, because at the end of the synod it was speculated that the Pope would publish the exhortation between March and April. Now, there are persistent rumors that the exhortation will be published in January, or at the latest in February. It seems that Pope Francis is in a hurry to close the Pan-Amazonian Synod. There would be a profound reasoning for this.

Last week marked the tenth anniversary of the death of the philosopher Methol Ferré. Pope Francis himself said that Ferré taught him to think. Ferré had a continental vision of Latin America. He wanted a global America, but not a liberal America, capable of joining the forces of the continent so that the continent could take a leading role in history.

For example: according to the philosopher, globalization started at the beginning of humanity, when the homo sapiens crossed on foot from Africa to the Middle East.

This view is mirrored in Pope Francis’ view of a world that has always been made by migrants and people on the move. A world, in the end, where everything is mixed up, and nothing stays the same.

Then, there is the issue of economic liberalism. Methol Ferré explained that globalization was perfected after the fall of the Soviet Union and convergence around a unipolar world. The “Washington consensus” certifies the new globalizing trend, and uses globalization to project liberalism all over the world. Globalization and neoliberalism are not the same, though many – like the anti-global groups – identify them as two sides of the same coin. In Laudato Si, Pope Francis attacks economic neoliberalism, and at the same time, he looks at the beneficial effects of globalization.

In the 1979 Puebla conference, the term globalization is more appropriately addressed. The bishops speak about a “global challenge,” referring to a new era of human history. In the “Puebla dictionary,” globalization is associated with phrases like “new universality” or “universal culture.” The general perception is still that globalization is a threat, something that unstoppably advances and makes uniform everything it encounters in its path. Pope Francis often opposes this view with the image of the world as a polyhedron.

St. John Paul II participated in the Santo Domingo conference in 1992 and invited all the bishops to “set the gaze on the sign of the times.” The bishops welcome the Pope’s address and describe the “planetary interrelation” as one of the main characteristics of Latin America, increasingly underscoring the positive value of the integration of the continent. However, the Santo Domingo conference mostly celebrated the 500th anniversary of the discovery and evangelization of Latin America, and could not foresee how the new “unipolar” order would emerge. At that time, globalization was still a new term for the Church in Latin America.

All of these nuances can be found in Pope Francis’ views. The Church in Latin America is now looking to find its place in the world. Methol Ferré used to say that the only way to do so is to have a nexus with the Pope, since “it is looking to the global that you can see the particular. To see everything in one of it component parts, one could say, paraphrasing a famous work by von Balthasar.”

To Pope Francis, this is the real challenge of the Panamazonian Synod. The ecological issue has mostly been used as a conduit for politically driven discussions at the Synod. However, this is a cultural issue rather than a political or religious one.

The so-called Amazonian exception was put to the fore, as it was the possibility to establish a particular Amazonian rite, with a specific juridical framework to regulate it. However, this is not a theological issue; it is not born with the idea of creating a schism. It is, mostly, put forth by the need to give the Latin American continent cohesion. This cohesion arises from the need to recognize the dignity of Native American people and set them free of the colonization mentality. The Pan-Amazonian Synod aims at creating a new world, with strength and traction.

The creation of a new world risks bringing a theological and ideological drift. Every exception bears risks. Pope Francis, however, trusts popular piety. In this, he is a real follower of the Theology of the People that represented a strong alternative to Liberation Theology in Latin America.

Pope Francis’ legacy is that of a renewed dignity for the Church in Latin America. The post-Synod exhortation must be read through these lenses. Essentially, Pope Francis shares Simón Bolívar’s dream, from a Catholic perspective.

During his trip to Panama last January, Pope Francis recalled that “almost 200 years ago, the Libertador Simón Bolívar had the vision of a united continent, and Panama would play the role of the center of the world”, and that the vision is “strengthened with the presence of the Pope and hundreds of thousands of young people.”

The Synod for the Pan-Amazonian region is indelibly linked to the Panama World Youth Day, which has been a World Youth Day for Latin America. Pope Francis wanted it in Panama because it was there that Bolívar set up a congress to try to confederate the republics of the Hispanic area of Latin America.

Panama was chosen because it was a land of passage, and Bolívar thought of it as the capital. The congress was called “Amphictyonic congress,” and it was permeated by the idea of fraternity that fills many of Pope Francis’ speeches, so much so that it was the central theme of the 2018 Urbi et Orbi message.

So, the post-Synod exhortation will likely be pervaded by the Bolivarian idea of “A Great Homeland.” This idea will stand above everything else.

One Response to Pope Francis, towards the post-Amazonian Synod exhortation