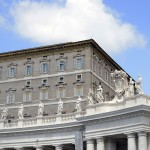 A private audience recently granted to Msgr. Guido Marini, who since 2007 has been Master of Pontifical Ceremonies, might mark the moment of transition within Pope Francis’s pontificate.

During this year the five-year terms of Pope Benedict XVI’s last appointments expire. There are also many key posts that are vacant in Vatican dicasteries. Pope Francis’s next appointments, then, will show how he intends to design his curia and his government.

Until now the principle of “reform while walking” was in effect. This is the principle of a reform carried out without changes or substitutions in the old documents that have regulated offices and functions, but simply superimposed newer offices on older ones.

In terms of curia reform, the old Apostolic Constitution “Pastor Bonus” is still in effect, although a draft of a new one is constantly rumored to be in the offing. As far as the composition of the curia itself goes, Pope Francis did not put a real spoils system into effect. Beyond a few high-ranking appointments – like that of Cardinal Beniamino Stella as Prefect of the Congregation for the Clergy – the Pope left the curia generally as it was before him.

Even the appointment of Cardinal Pietro Parolin as Secretary of State came only after some months of the pontificate, even though Parolin’s predecessor, Cardinal Tarcisio Bertone, had passed the retirement age.

The Secretariat of State’s modus operandi in reaffirming its centrality made Cardinal Parolin one of the most credible candidates for the next pontificate, because in the end there are already rumors circulating about an upcoming conclave.

However, this is a moment of transition, and Pope Francis himself is called upon to give shape to his projects.

The Secretariat of State is also experiencing some changes, as there are some posts to be left vacant. The Pope is undertaking the usual reshuffle of nuncios. Among the new ones are Archbishop Savio Hon, who served until now as Number 2 in the Congregation for the Evangelization of Peoples. Hon was sent as nuncio to Greece, a move which resulted in the de facto decapitation of the China team in Propaganda Fide.

Likewise, there are three officials of the Secretariat of State that is rumored are going to be appointed nuncios: Msgr. José Bettencourt, Vatican Chief of Protocol; Msgr. Antoine Cammilleri, Vatican Vice-Minister for Foreign Affairs; and Msgr. Christophe de Kassis, who comes from the ranks of the Holy See’s delegation to the United Nations.

In addition, the post of chief officer for multilateral issues is vacant, too. Msgr. Osvaldo Neves de Almeida retired after years of honored service and went back to Brazil. He was appointed consultor to the second section of the Secretariat of State on October 10. The next multilateral guru will be expected to give new impetus to a key post in Vatican diplomacy. Not by chance, Cardinal Pietro Parolin last summer personally presented the book, “The Vatican in the Family of Nations”, written by Archbishop Silvano Maria Tomasi, who served for 13 years as Permanent Observer of the Holy See at the UN in Geneva.

If rumors are all correct – but it is also true that rumors are often just ballon tests – this means that the Secretariat of State’s ranks will be filled. There is also the possibility that the same Secretariat – once viewed restrictively on a par with the other Secretariats established by the Pope – will take an ever more central role, even thereby eroding the competences of other offices in the Roman Curia.

Although there is a lot of pressure to reform the Pontifical Household, advocates of reform often lose sight of the importance that this structure has for the Vatican State, and more generally the historical and institutional weight that it has.

There are many clues indicating an attempt for a possible transition. In the end, if a new Papal Master of Ceremonies will be appointed, this will represent a further step in this transition, while there are still many bishops in key posts throughout the world who must be replaced because they have passed the retirement age. These appointments will also tell a lot about Pope Francis’s idea of the Church in the world.

In the meantime, the tone of the debates surrounding the curia is becoming ever harsher, and this on account of an internal struggle. Indications of this struggle can be seen in the tough response that Pope Francis sent to Cardinal Robert Sarah, Prefect of the Congregation for the Divine Worship. The Congregation drafted a commentary on the motu proprio “Magnum Principium” with which the Pope reformed the process of review for the translations of liturgical texts.

This motu proprio was written by the Secretary of the same Congregation, Archbishop Arthur Roche, who also presided over the commission that drafted the motu proprio as well as the note that accompanied the text. Cardinal Sarah got a strongly worded letter from the Pope, made public via a Holy See Press Office Bolletino. In the letter, the Pope clarified the rationale behind the motu proprio and asked the Cardinal himself to deliver it to the websites that published his “commentaire”.

This made think that also Cardinal Sarah could be replaced, even though his mandate will end in two years. Archbishop Roche could be in line to replace Cardinal Sarah, in the same way that Archbishop Luis Ladaria recently took the place of Cardinal Mueller as Prefect of the Congregation for the Doctrine of the Faith. In the end, Pope Francis is not interested in a revolution. He waits for each official’s term to expire, and then he replaces them.