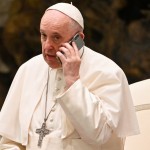 8 Responses to Pope Francis, what awaits him starting in October