Pope Francis, towards new rules for the sede vacante? Does Pope Francis have a communication strategy? 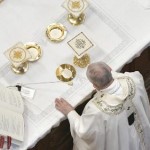 Pope Francis’ Apostolic letter number 83 is the Pope’s response to the question of the traditional Mass. Released on June 29 and formally signed in San Giovanni in Laterano because the Pope preferred this formula to emphasize his role as bishop of Rome, Desiderio Desideravi consists of 65 paragraphs and is, in practice, a small summary about the thought of the Pope. Formally it concerns the liturgy. However, the letter tells us much more.

For Pope Francis, the apostolic letter is a governing method and a way of exercising power. But, as always, form is also substance. And anyone who sees a lack of form in this informality of Pope Francis would be wrong.

Pope Francis wants to communicate that he addresses the people of God directly, without filters. Witness the fact that the letter is in the first person and does not fail to express the personal thought of Pope Francis. There are, it is true, many quotations, even learned ones, in the letter. But they are all part of Pope Francis’ plan to justify his thinking. After all, Pope Francis builds theses and does not open up debates. Indeed, this apostolic letter aims to close any discussion.

The second thing concerns the very personal style of the letter. Not that other Popes have not used personal styles or have not addressed the bishops and people of God directly, with heartfelt tones.

To cite a recent example, Benedict XVI did so in at least two crucial occasions: when he wrote to the bishops and people of Ireland shaken by the case of the abuses, and when he wrote to his confreres in the episcopate following the controversy surrounding the revocation of the ex-communication of four Lefevbrian bishops.

The letter on the Lefevbrians was defined simply as a letter; that to the Catholics of Ireland, as a pastoral letter. The apostolic letter is undoubtedly less important than an apostolic constitution, an encyclical, or an apostolic exhortation, but it remains an expression of the Pope’s magisterium.

Therefore, with Pope Francis, a personal point of view becomes magisterium. So it happened in other cases during this pontificate. The most famous is the one in which Pope Francis decided that a letter he sent to the Argentine bishops regarding the application of the Apostolic Exhortation  Amoris Laetitia be inserted in the Acta Apostolicae Sedis, the official documents of the Holy See.

From these approaches, we can see that Pope Francis is a more centralizing pope than he wants to show. There is much talk of synodality and parrhesia, but we have a Pope who legislates via Motu Propri and makes his opinions official with apostolic letters. It is food for thought.

Hence the third fact to pay attention to: Pope Francis’ idea of unity.

In number 61 of the apostolic letter, the Pope writes that “we are called to continually rediscover the richness of the general principles set out in the first numbers of Sacrosanctum Concilium by understanding the intimate link between the first of the conciliar Constitutions and all the others.”

Pope Francis describes the Traditionis Custodes, which abolished the liberalization of the ancient rite, as a gesture of continuity with the decisions of Paul VI and John Paul II. He explains that he wrote it “so that the Church can elevate, in various languages, the one and same prayer capable of expressing its unity. This unity, as I have already written, I intend to be re-established in the whole Roman Rite Church.”

In practice, the Pope imposes unity by force. It is exclusive instead of being inclusive, and it is paradoxical, considering that the whole pontificate has been described in terms of inclusiveness.

Previously, the Church tried to include those who came out of general understandings as long as they showed that they wanted to remain in communion with the Church. John Paul II tried until the end to heal the rift with the Lefevbrists and conceded only to the illicit consecration of four bishops.

Benedict XVI solved the problem by allowing the liberalization of the ancient rite but by asking the Lefevbrians to sign a preliminary document in which they accepted the Second Vatican Council for communion with Rome.

Pope Francis takes a different approach. He treats those outside the Church with the utmost respect, and the Lefevbrists have seen confessions and marriages validated during this pontificate. At the same time Fellay, the former head of the Priestly Fraternity St. Pius X, was also a judge in some rotal proceedings.

However, those who remain within the Church and have different points of view are immediately forced to back down because Pope Francis has a precise opinion of what plurality should be. In the end, even in this, Pope Francis is a Pope that exercises command alone.