By Andrea Gagliarducci On 6 settembre 2021 · 3 Comments · In Vatican 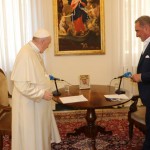 3 Responses to Pope Francis, what does the interview he gave to COPE tell us?

Rispondi a What awaits the Pope in October... - Salvation & Prosperity Annulla risposta