Pope Francis, what goal in theology? 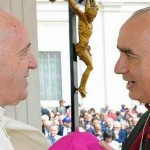 The appointment of Antonio Staglianò, bishop emeritus of Noto, as president of the Pontifical Academy of Theology reveals how Pope Francis wants his theologians to be, and how the Pope himself sees the development of theology.

Pope Francis indeed likes to quote St. Vincent of Lerins and how he defines the development of doctrine. But the theme for Pope Francis is undoubtedly different, and it has been evident since Evangelii Gaudium. The problem, for Pope Francis, is not the doctrine but how it is presented. It is a mainly pragmatic approach to the problem.

But it is an approach in which the selection of Bishop Staglianò, who became famous for his theorization of the so-called Pop Theology, is reflected. It is a popular theology, “unconventional” in the words of the bishop himself, which aims to present the Gospel in a contemporary language. In particular, Bishop Staglianò loves to use pop music pieces, particularly those of the Sanremo Festival. This most important Italian music festival has been an actual collective ceremony for years, seen by millions of people.

Bishop Staglianò has solid theological studies and various theological publications behind him. However, he is not an educator in the academic sense of the term. In a Pontifical Academy of Theology, founded in the eighteenth century precisely with the aim of training theologians, Bishop Staglianò seems to be an outsider. Still, he comes in with a starring role.

Why? Because for Pope Francis, the priority is to rejuvenate the language. The Pope might have no intention of changing the doctrine, but he is convinced that the doctrine must be presented differently to be attractive. The doctrine must communicate joy. It must not show prohibitions. Doctrine as a question of language: this is perhaps the central theological theme of Pope Francis.

There are, at this point, several considerations to make.

The first: in modern times, the Pontifical Academy of Theology presidents have always been presbyters and never bishops or archbishops. Pope Francis initially continued this tradition with the appointment of the Redemptorist Real Tremblay in 2014. In 2019, however, Pope Francis chose Archbishop Ignazio Sanna, then 77, to take over the Pontifical Academy of Theology presidency until he turned 80.

Sanna, a well-known theologian, had had substantial teaching experience before the pastoral duties to which he was called by the archbishop of Oristano. With a solid theological background, in an interview with Vatican News immediately after his appointment, he defined today’s significant challenges as, first, making people understand that theology still had a place in the modern world, and second, that entering of into a dialogue with the sciences. Furthermore, he framed the challenges of the future in terms of the issues relating to life and family matters.

Pope Francis replaces him with another bishop, who appears to be less conventional and more akin to Pope Francis’ thinking of addressing major issues instead of central doctrine themes. We look first of all at the human being, and the discourse on God must rather all be a human discourse.

But the fact that the Pope chooses bishops for these posts shows how he wants to institutionalize his thinking. Since he became Pope, Francis has given episcopal appointments or even appointed cardinals where he tried to strengthen his position. In the end, it is a question of emphasizing the function, like the medals given to officers.

Therefore, this revolution of pop theology had to be carried out at the highest level to create a theology with a human face.

The second fact is that the Pope chooses as the educator of the new school of theologians a residential bishop, Orthodox in his publications but very pragmatic in his homilies. We do not know if Staglianò will be able or not to enter into a dialogue with the intellectual world, and we hope he does. However, his appointment seems to be a leap into the void, almost an imposition of a way of thinking or seeing things.

The third data point comes from the profile of Bishop Staglianò himself, a pastor who shows himself to the peripheries (even of thought) as Pope Francis always invites people to do. The new theological line, therefore, will be to rejuvenate language, explaining the Gospel from another perspective.

Thus, some central themes of the debate are downplayed, from the one on doctrine to that on the great themes of life and bioethics, which must be relativized and set aside to address the issues that may attract dialogue.

So is Pope Francis pursuing a theology of dialogue? To see his provisions, it would not seem so, starting from the motu proprio with which he abolished the liberalization of the traditional rite desired by Benedict XVI.

Pope Francis, however, asks to look at language, distracts attention from internal divisions (often simplistically branded as resistances), and calls a bishop to Rome to take care of his words and philosophy.

These features are food for thought. How will this pontificate finally turn out?

3 Responses to Pope Francis, what goal in theology?