Pope Francis, why do Eastern Churches matter in the end? Pope Francis, here are the reforms still under discussion 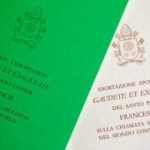 The apostolic exhortation Gaudete et Exsultate by Pope Francis is not only a document on holiness. Somehow, it reveals the Pope’s modus operandi, showing some of his weaknesses and some of his strengths. Perhaps, it is also a document that might let us glimpse into the next Pope Francis’ steps.

First of all, three remarks.

However, it is noteworthy that Gaudete et Exsultate  is an exhortation. Pope Francis prefers exhortations to encyclicals, and this reflects his way of governing. In general, Pope Francis barely takes strong stances on the big issues. He rather prefers to open discussions and processes and keep them open.

Pope Francis’ Church is a Church in a state of permanent Synod, though the Pope personally makes all the decisions. An exhortation seems to fit more than an encyclical to this modus operandi.

Number 2: Pope Francis apparently became aware of the possible rebounds of his affirmations in the theological field. For this reason, he wanted that the document Placuit Deo by the Congregation for the Doctrine of Faith was published before his exhortation, as if a theological substance was needed for the exhortation.

It is hard not to connect the need for theological ground to the media campaign conducted to highlight Pope Francis’ theological roots. This campaign included the publication by the Vatican Publishing House’s of a series of 11 books that the Pope emeritus Benedict XVI was even asked to write the foreword for.

All the main characters of that campaign had negative consequences from that.

However, the fact that Msgr. Dario Edoardo Viganò resigned from his post of prefect of the Secretariat of Communication  and however stayed in the ranks of the dicastery as its number 3 let think that the operation to promote Pope Francis’ theological grounds was considered at least necessary at the top ranks.

This is just speculation. More likely, Pope Francis thought that there was the need to give his upcoming document some theological substance, at least to avoid some useless critics on how neopelagianism and gnosticism were framed. This showed that Pope Francis understood the need for a theological approach, in order to preventively defend the text from critics: Pope Francis really wants that the Gaudete et Exsultate message breaks.

Number 3: the exhortation is not only an exhortation on holiness, but it is also apparently framed as a response to critics to some issues of the pontificate.

Beyond some important and beautiful passages, like those on the devil, n. 101 and 102 of the exhortation are thought provoking.

N. 101 describes the “harmful ideological error” of those “who find suspect the social engagement of others, seeing it as superficial, worldly, secular, materialist, communist or populist.”

Pope Francis seems to implicitly refer to the critics moved against him. It is not a secret that the Pope wants a Church committed in social issues and able to carry forward this commitment in the public arena, as he explained in the foreword of the book curated by journalist Michele Zanzucchi “Potere e denaro. La giustizia sociale secondo Bergoglio”.

The Pope then continues that “our defense of the innocent unborn” must be “clear, firm and passionate,” but that “equally sacred, however, are the lives of the poor, those already born, the destitute, the abandoned and the underprivileged, the vulnerable infirm and elderly exposed to euthanasia, the victims of human trafficking, new forms of slavery, and every form of rejection.” The Pope, then, says it clearly: “We cannot uphold an ideal of holiness that would ignore injustice in a world.”

In n. 102, Pope Francis underscores that “we often hear it said that, with respect to relativism and the flaws of our present world, the situation of migrants, for example, is a lesser issue. Some Catholics consider it a secondary issue compared to the ‘grave’ bioethical questions.” He also adds that this point of view is not understandable from a Christian point of view.

Even in this case, he seemed to implicitly refer to accusations moved toward his pontificate and his modus operandi. Even in this case, Pope Francis gave a sharp judgment: who does that is not a Christian. Full stop. No exit strategy. No eventual mercy for those who behave in some certain way.

The balance of Pope Francis’ statement in this case swings toward the issues of social justice, although the Pope said that these issues are not less important than other issues like life issues, highlighting something contradictory in Pope’s way of spelling things. In general, it shows how Pope Francis is sensitive to the critics moved to him, and so he used an Apostolic exhortation to address the critics. Pope Francis is seemingly using this tool to claim the legitimacy of his actions.

These three remarks are food for thought. But we cannot keep them out of context. And history, as always, helps to understand.

Was Pope Francis the first Pope for taking care for migrants? No, because the Holy See has always spoken in defense of migrants and of their human dignity, and was always criticized for this.

(For instance, when Archbishop Agostino Marchetto was the secretary of the Pontifical Council of Migrants, he spoke out fiercely against the migration policies of governments. His declarations were balanced by the Holy See prudence, while Catholic charities kept on working as usual in favor of migrants in international tables. When Archbishop Marchetto asked for an anticipated retirement from his post, many attributed the request to frictions with the Holy See. But it was not true. Beyond the clarifications the Holy See had made in public, migrants have always been a core issue).

Is, Pope Francis, the first Pope to ask for a more equitable social justice? No, all his predecessors did, being all of them subjected to strong critics from the secular world.

Is, Pope Francis, the first Pope to speak about a less worldly Church? No. Benedict XVI did in Germany in 2011, and even before speaking with Swiss Bishops in ad limina visit in 2006.

These are just examples. But they are significant. They raise the suspicion that, anytime Pope Francis speaks, all the biases that tend to generate a new narrative for the Church are activated.

Behind Pope Francis’ need to respond to critics, it is rumored there is some real issue: even some of his collaborators complained for his modus operandi and for some of his spontaneous declarations. In both cases, a rumor was spread that Pope Francis is a great Pope, but he needs to be understood because of his lack of theological preparation.

There is also a more subtle struggle, fought with this Pope and behind this Pope’s back: the push to change the theological interpretation of the doctrine.

This struggle is not brand new. Under this pontificate, however, the struggle exacerbated. In Pope Francis’ will to keep the processes open, those who want to change the doctrine saw a way to jump into the discussion and lead the public opinion to their side.

This already happened during the Second Vatican Council, when – as Benedict XVI’s said – a real Council and a Council of the media took place.

It also happened with the discussion on contraceptive pill – not by chance Paul VI took the issue of the pill out of the discussions of the Second Vatican Council. And not by chance, Paul VI was attacked on Humanae Vitae, the encyclical that followed. The encyclical was even described as a non binding magisterial document – an ironic move, if we consider that now, while Pope Francis uses ‘light’ documents to keep the processes open, every Pope’s affirmation is described as part of an irrevocable authority by the same people who reject Humanae Vitae teaching. The infallibility dogma, that usually progressives have neglected, is now de facto claimed to carry on their thesis, according to a clear agenda.

This agenda leads directly to Humanae Vitae, but has likely the secret intention to revolutionize the Church. One of the goals could be that of allowing the women priesthood.

On Apr. 8, a group of traditionalist theologians and intellectuals, with the presence of two Cardinals, gathered with a crowd in Rome to discuss many issues, in particular the Pope’s authority to change the doctrine. The meeting was immediately labeled as a meeting of Pope Francis’ opposers, according to the use of a language that generates a war just by describing it.

At the end of the meeting, a declaratio was issued to reaffirm the Church’s teaching on marriage and family, in part addressing the issue of the famous dubia addressed to the Pope by four Cardinals and bringing back Amoris Laetitia at the center of the discussion.

Amoris Laetitia is, indeed, an old battlefield. Beyond the footnote that might guarantee the access to communion to Catholic divorced and remarried – that is in the end the main topic of discussion – the exhortation’s text was framed in a traditional way, and also included a praise to the Paul VI’s Humanae Vitae.

If Amoris Laetitia has been a battlefield, Humanae Vitae is the real topic of discussion nowadays. The 2018 Synod on Youth might be one of the means to touch it, as it could be underscored that young people might wish a change in the interpretation of the sexual morality.

In the meantime, there are also bigger goals. The Pontifical Commission for Latin America asked for a Synod on the role of woman as a natural follow up of the Synod on family and the upcoming Synod on youth, to carry on the “pastoral conversion” Pope Francis asked for.

Even the Pontifical Commission for Latin America made the request via a traditionally framed document. However, the request for a change of mentality contained in the document can be exploited and used as a first seed that could lead, from now to the 2021 ordinary Synod, to the request of changing the norms.

These are the themes on Gaudete et Exsultate background.

In the end, the exhortation reveals a wider scenario. Pope Francis has not a real problem in doctrine, as his documents  – though sometimes vague – present the tools to be read in continuity with the magisterium  – the doctrinal issue is mostly generated by a strong external discussion. Pope Francis’ issues are more likely to be found in governance, as the Pope’s need to reiterate and officialize the things he believes in with an exhortation might emphasize.

The exhortation itself is striking because it is written in first person and with sharp judgments, rather than being written on high level topics.

Pope Francis language is deliberately concrete and pastoral, but it does not provide with a pragmatic and theological frame that can avoid attacks. It is the same for Curia reform and for issues like holiness. We should remind this everytime we try to analyze Pope Francis’ moves.