Pope Francis, any moves with a view to a Conclave? Pope Francis, what does the interview he gave to COPE tell us?

Pope Francis, what is behind the idea of resigning? 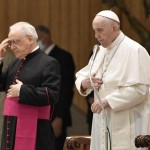 Apart from the official bulletins of the Holy See Press Office, there has been no official news on the Pope’s health. However, Luis Badilla, a Vatican observer who worked for Vatican Radio, spoke of a “degenerative” disease that could become “chronic.” Two adjectives that suggest that it is not just diverticulitis, the official reason for the Pope’s three-hour surgery, which also involved removing a piece of intestine.

In August, Pope Francis resumed his appointments and appeared quite fit in public, both for the Angelus and the general audiences. Sometimes his voice sounded more tired, but this is understandable. The Pope has confirmed his trip to Budapest and Slovakia from September 12 to 15. A one-day trip to Glasgow to attend and speak at COP26 is under study, and there is still the possibility of a trip to Greece and Cyprus.

Where, then, are the rumors of the possible renunciation coming from? Why are they spreading so fast?

Several things have happened, which have restarted a debate that had never concluded. First, Alberto Melloni, the historian of the Bologna school who interprets the Council as a rupture, proposed a reform of the Conclave. Not an anti-Francis analyst, Melloni recently criticized the Pope and the pontificate strongly, especially following the Pope’s decisions on Enzo Bianchi, the prior of the Bose community who was exiled from his community after the arrival of a papal visitor.

Melloni supported the reforms that the Pope seemed to want to make, just as he supports the winds of renewal that were blowing around Pope Francis. The criticism of the Pope is similar to that of a betrayed lover and also confirms an inevitable disillusionment of the so-called progressive front. But the proposal to reform the Conclave denotes a fear: that, after the revolution of Francis, there will be a restoration, with a return to some dynamics of the past.

Why would isolation be necessary? First, to avoid any external influence. Currently, 58 percent of the college of cardinals are cardinals created by Pope Francis. In many cases, they are cardinals who do not know the Vatican, have little institutional experience and have never been to the Curia. None of them know the other cardinals well. The Cardinals don’t know them. Therefore, a conclave full of surprises is expected, in which few will be able to command a significant set of votes. The cardinals, after all, vote for whom they know. And they get to know each other in small groups.

This would allow, instinctively, to continue on the line drawn by Pope Francis for a simple matter of continuing on the safe side. However, what would happen if the cardinals could have other points of view, other ideas, and perhaps evaluate alternatives? Would Pope Francis’ revolution be supported?

These questions remained open and immediately led to another debate: what is the status of a pope emeritus? Pope Francis did not want to legislate on the subject, and Benedict XVI did not want to do so precisely not to influence his successor. With his choice to wear white, Benedict XVI has equated consecration as Pope to episcopal ordination. The bishop does not stop wearing the insignia once he becomes emeritus, and nor does the Pope.

Benedict XVI has never contested the authority of Pope Francis, and every time he has spoken publicly in recent years, he has always informed his successor. And his successor has never had anything against it; indeed, already back in 2014, he had said that “The Pope Emeritus is not a statue, he participates in the life of the Church.”

The legislative vacancy has also created problems. Some said that Pope Francis is not the legitimate Pope; others attacked Benedict XVI because he created confusion. Of course, it wasn’t true, it wasn’t Benedict XVI’s intention, but all of this happened.

Thinking about defining the status of Pope Emeritus is, therefore, necessary for two reasons. The first: if you want to secure Pope Francis’ revolution, it must be clear that there are no shadows on his pontificate and that no pronouncement of the Pope Emeritus can be above or contrary to the authority of the Pope. The second: what would instead be the role of Pope Francis in case he renounces?

The renunciation, however, is also linked to the state of health of Pope Francis. That is to say: what happens if the Pope is prevented from governing, temporarily and permanently, for health reasons? Who exercises the government? Would there be the possibility of electing another Pope in that case, considering it a de facto resignation?

There is a legislative vacuum to fill, and the debate has begun. But, unfortunately, Pope Francis doesn’t seem to have dealt with it yet. Indeed, even greater activism is expected to carry out the design of the Curia and some of the reforms close to his heart.

On August 26, surprisingly, the news broke that Father Augusto Zampini resigned as adjunct secretary of the Dicastery for Promoting Integral Human Development. A rising star of the dicastery, Argentine, known by the Pope, Zampini returns to the diocese, after the inspection on the dicastery conducted by Cardinal Blaise Cupich, archbishop of Chicago – the last inspection of the season of inspections, which began with that to the Congregation for Divine Worship and continued with the inspection of the Congregation for the Clergy.

Father Zampini’s successor is Sister Alessandra Smerilli, who becomes the highest-ranking woman in the Vatican. But her role is that of interim secretary. Just like Father Andrew Small was appointed as interim secretary, called to coordinate the Pontifical Commission for the Protection of Minors.

Why this proliferation of interim appointments? Because Pope Francis is waiting to better define roles with the Curia’s reform. This should come out in the autumn, even if it will probably be subject to further adjustments.

So, the Pope could even decide to convene a consistory in early October, with the creation of five to six cardinals that could include the new Curia appointments with the reform and even some surprises. It would be a decision that would “widen” the electoral base of the Conclave, and therefore would strengthen the Pope Francis’ vision.

Rumors about these operations are widespread and underscore that there is no papal desire to resign, except for one possibility, namely that the Pope wants to personally have a hand in the Conclave that will elect his successor.

At that point, Pope Francis could publish a document establishing the roles and tasks of a pope emeritus and then renounce, keeping for himself a position in the General Congregations, where he could act as first among cardinals. At that point, the orientation of the debate would be well defined by the presence of a predecessor, which has never happened in the history of the Church.

This eventuality is considered above all in Argentine circles, which recognize a very personalist and centralizing power management in the Pope.

However, it is all speculation. The simple truth is that the Pope’s illness has allowed us to think about what will be the next Conclave like, and about a new Pope. And no party has any intention of being caught unprepared.

4 Responses to Pope Francis, what is behind the idea of resigning?