Pope Francis and Two Movies That Tell Better Than Any Other The Current Situation in the Church Pope Francis: Beyond the Submerged Schism

Pope Francis: What Is His Rationale? 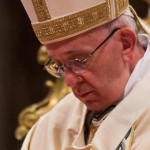 A recent article published in the onine magazine The Week and then mentioned in various American media shed light on a particular “modus operandi” of Pope Francis in tackling the issue of abuse of minors by clergy.According to the article, Pope Francis is dismantling the set of reforms put into effect by St. John Paul II and Pope Benedict XVI to restore the local churches’ responsibility to counter the sex abuse scandals.

To cut a long story short, Pope Francis’s reforms in general seem to be dual-faceted. These two faces are in the end very different. On the one hand, there is a strong push toward the autonomy of local churches, toward a decentralization of functions, especially in doctrinal terms, as is hinted at in the Apostolic Exhortation “Evangelii gaudium,” the real program of the pontificate. On the other hand, one notes a progressive centralization, concentrating all the decision-making powers in the Pope himself or in his restricted circle, thus somehow taking power away from the Curial dicasteries that in fact represent a sign of the Pope’s collegial governing.

It is then important to understand the rationale of Pope Francis’s reforms. This rationale does not seem fixed, but always evolving. It has among its “pros” that it is supported by Big Media, because it represents positions that the secular media really wants to see the Pope take. But his rationale also has as “cons” the points that his framework is never clear, that decisions seem always to evolve and never to be part of a clear, broad, long-term project. This rationale was well explained by Bishop Marcello Semeraro, Secretary of the Council of Cardinals, in an article on Curia reform published some weeks ago by “Il Regno” magazine. Pope Francis outlined it completely in his Christmas Address to the Roman Curia, in which he made a sort of summary of all the reforms he had made, with a comprehensive list of all the “motu proprio” edicts of his pontificate.

What in the end is the core of Pope Francis’s rationale? The issue of sex abuse by clergy offers a good example. It allows us to understand how everything can be traced back to interpretations of the Second Vatican Council. During their pontificates, St. John Paul II and Pope Benedict XVI tried to give a shape and a finality to the Council’s reforms. With Pope Francis, it seems that the debates have returned to those early years immediately after the Council.

All the issues of this particular debate are as present as they were at the beginning, starting from the push toward local churches as an alternative power to the Pope’s.

“Delicta graviora” – those “most grave crimes” that include cases of sexual abuse of minors – have a story. They are crimes reserved to the former Holy Office (now the Congregation for the Doctrine of the Faith) and included in the Code of Canon Law issued by Pope Benedict XV in 1917. These crimes led to the promulgation of “Crimen Sollicitationis”, a document that provided detailed instructions to diocesan tribunals about how to deal with priests who exploited the Sacrament of Penance in order to make sexual advances on the penitent. The document also included a short section about the so-called “crimen pessimum”, homosexual behavior by a member of the clergy, the norms for which were then extended to the crime of sexual abuse of minors.

After the Second Vatican Council, a wide debate re-opened every previously established principle for renewed discussion, for example, the general idea of decentralizing power by giving more responsibility to bishops, and – even more – by valuing the capacity of the local bishops for discernment of matters in their own dioceses. Some experts even raised the question about the “anachronism” of a judicial trial for clergy under the procedures provided for by canon law, preferring instead a “pastoral approach.”

Obviously, this issue should be interpreted through the lens of those particular years. The approach was not aimed at covering-up cases of sexual abuse. But with time it became evident that the management of cases at a local level could lead to some “gaps” in the reporting system.

Pope Benedict XVI explained the particular climate of those years in the pastoral letter he sent to Catholics of Ireland in 2010, a milestone document for understanding his approach to the clerical sexual abuse scandal and to the way the Church has moved ever since.

Benedict wrote: “The programme of renewal proposed by the Second Vatican Council was sometimes misinterpreted and indeed, in the light of the profound social changes that were taking place, it was far from easy to know how best to implement it. In particular, there was a well-intentioned but misguided tendency to avoid penal approaches to canonically irregular situations. It is in this overall context that we must try to understand the disturbing problem of child sexual abuse, which has contributed in no small measure to the weakening of faith and the loss of respect for the Church and her teachings”.

Benedict’s analysis explains – but obviously does not justify – what happened prior to and during the years of scandals.

From 1962 to 2001, “Crimen Sollicitationis” was applied only in cases of abuse involving the Sacrament of Penance. At that time, the Holy Office did not have juridical competence over cases of sexual abuse, but only those that dealt with the abuses occurring in conjunction with sacramental confession. For this reason, during this period only a few cases of abuse were reported to the Holy Office.

In 1983, a new Code of Canon Law was issued, but it was not of any help. Canon 1395 states that trial for abuse must take place in the diocese, and the procedures get more complicated. Cardinal Joseph Ratzinger, then Prefect of the Congregation for the Doctrine of the Faith, asked Cardinal José Rosalio Castillo Lara for clarifications – the Cardinal was then president of the Pontifical Council for the Interpretation of Legislative Texts. Cardinal Ratzinger asked how the norms in Canon Law could be correctly interpreted in order to laicize priests who committed sexual abuse.

This happened in 1988. In the same year, “Pastor Bonus”, the Apostolic Constitution that regulates functions and competences of the Curia offices, was issued. With “Pastor Bonus”, the Congregation for the Doctrine of Faith extended the range of crimes under its jurisdiction, even though the Constitution does not provide any list of such crimes. Because of this omission, local diocesan bishops retained the responsibility for trying priests who committed abuse. In practice, therefore, competence for overseeing such matters in the Roman Curia remained with the Congregation for the Clergy.

2001 was the turning point. After the pedophilia scandal exploded in the Archdiocese of Boston, St. John Paul II issued the motu proprio “Sacramentorum Sanctitatis Tutela”, through which the authority for investigating cases of abuse was transferred from the Congregation for the Clergy to the Congregation for the Doctrine of Faith. In 2002, the Congregation for the Doctrine of the Faith issued the instruction “De Delictis Gravioribus”, which outlined a detailed procedure to tackle the abuse cases. Centralization was needed, as in the most cases abuse could keep on taking place because dioceses failed to report cases of clergy sexual abuse of minors to Rome, and in many cases they simply moved abuser priests from parish to parish, rather than punishing them.

Joseph Ratzinger was the main inspiration for this change, and he carried on with this path when he was elected Pope. In July 2010, the Congregation for the Doctrine of the Faith introduced some modifications to Canon Law that made clearer how the dicastery would examine and punish cases of clerical sexual abuse of minors. In the very same year, the Congregation for the Doctrine of Faith asked Bishops Conferences from all over the world to issue and adopt guidelines in countering abuses starting from May 2012. This letter highlighted three key points: education of future priests or religious brothers, assistance for convicted priests, collaboration with the civil authorities.

Certainly the local churches did not stay silent or inactive. Just two examples: the Commission that the Belgian Church set up after the shock of the Dutroux case in the mid-90s, and the guidelines issued by the Bishops of Ireland during the 90s that help to shed light on scandals in 2010.

It is noteworthy that, despite these data, Pope Benedict XVI’s approach was heavily criticized. It is also noteworthy that, considering these numbers, Pope Francis’s reforms – once again, based on a major centralization through the Pontifical Commission for the Protection of Minors, and at the same time major responsibility allocated to the peripheries – were considered effective. It is finally noteworthy that the press is struck by Pope Francis’s lack of forgiveness toward those responsible for the scandals – as he demonstrated again last week on December 28, in a letter addressed to all Bishops on the occasion of the Feast of the Holy Innocents, in which he reiterated the line of zero tolerance toward perpetrators – but at the same time the press forgets that Pope Benedict XVI met with victims, and that St. John Paul II addressed the issue clearly and strongly.

What is more shocking is that the secular world, so judgmental when it comes to sex abuse by clergy, so ready to attack the Church when the crimes and sins of its members come to light, is now backing the return of the management of these cases to the individual diocese, in line with the decentralization that the Pope always hoped for.

Even in these cases, Pope Francis’ decision are dual-faceted. For an “Inzoli case” described in the article in “The Week”, there is a special tribunal for “Delicta Graviora” mandated to assist the Congregation for the Doctrine of Faith in the appeals process – though the way this tribunal is going to work has not been specified. For a “Karadima case” and the promotion of a bishop who was linked to Karadima (a well-known abuser – the case was highly publicized because of the protests raised by one of the former members of the Pontifical Commission) there is a special tribunal to judge negligent bishops, a charge which was then redefined as sort of “crime of negligence” as yet without specifics, as it is a crime based on the subjective judgment of judges.

In the end, the problem is not simply in the way things are tackled, nor the people in charge of these matters. The real problem is in the apparent lack of a well-defined philosophy, a “modus operandi,” on the basis of which all the reforms are shaped. One may agree or disagree with the “modus operandi”, but things could be clearer, and in the end history will tell. In the end, there are seemingly no boundaries to assess what this “modus operandi” is. The debate is then frozen, as it was in the years that followed immediately the Second Vatican Council. And frozen, too, are the extraordinary newness of the Second Vatican Council, as well as the huge strides forward that the Church has made since the Council.

One Response to Pope Francis: What Is His Rationale?