Pope Francis, deciphering his speech to the Curia Papa Francesco, what happened in 2020 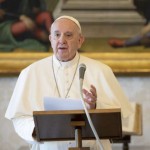 Pope Francis concluded the year by proclaiming a Special Year for the Family in 2021, dedicated to Amoris Laetitia. This special year, he explained, falls five years after the publication of the post-synodal exhortation that has generated so much controversy. It intends precisely to study it, reflect on it, and highlight the challenges of the family of tomorrow.

The announcement is unusual for several reasons. The first is that the Special Year for the Family falls in the same year in which the Year of St. Joseph was proclaimed to celebrate his 150th anniversary as patron of the Church. It was very striking that the Pope did not mention the Year of St. Joseph in the Angelus of 8 December, the day on which his motu proprio was published, and that he did so only later. The omission gave the idea of an event considered minor. The Special Year’s institution on the Family shows that, after all, the Year of St. Joseph is considered secondary. Was there no way to have better coordination, and perhaps to set up a single special year that would include the two anniversaries?

But the announcement is also unusual for the anniversary for which the special year is going to be celebrated: the fifth anniversary of Amoris Laetitia’s promulgation. It is unusual because Amoris Laetitia is not an encyclical but a post-synodal exhortation. Although an exhortation may contain magisterial statements, it is undoubtedly a less important document than a solemn pronouncement by the Pope. It is a document called upon to provide a synthesis of the work done by the bishops.

For Pope Francis, however, this has never been the case. The Evangelii Gaudium exhortation was the post-synodal exhortation of the last Synod celebrated by Benedict XVI, the one on the Word of God in 2012: Pope Francis put aside the conclusions of the Synod and wrote a document that, in reality, represented the programmatic lines of the pontificate.

The Pope wrote three encyclicals, but the first (Lumen Fidei) had already been prepared by Benedict XVI and therefore is not entirely his. Thus, there are two encyclicals genuinely by Pope Francis: Laudato Si and Fratelli Tutti. They are pragmatic, almost political, encyclicals addressed to the world as a secular leader would. When it comes to speaking to the Church, Pope Francis prefers lighter, less magisterial documents. And when a magisterium question arises, as was the case with the dubia on Amoris Laetitia, he always chooses not to answer but rather leave the debate open.

This is his vision of the crisis, but now he sees it dangerously turning into conflict. The last Christmas speech to the Curia was very indicative in this sense. And how does the Pope silence the resistance? By generating a consensus.

Here is how the Amoris Laetitia Special Year also serves to generate consensus on a controversial document. All are called to reflect on the text differently. With a particular emphasis on the family, Pope Francis hopes to reduce any resistance, allowing a more global vision of Amoris Laetitia, but above all, by shielding himself from the Bishops’ Conferences every time the text is attacked from the doctrinal point of view.

Will 2021 be the year of consensus for Pope Francis? Some signs lead to that conclusion. There is also talk of Pope Francis’ idea to convene a consultative consistory for the final approval of the Curia’s reform. Who could resist a document that the cardinals themselves have approved?

In this way, Pope Francis aims to put conflicts aside. And in this, we can see a general sense of distrust by the Pope, who feels increasingly betrayed by his collaborators and has begun to trust only a few direct collaborators. Some appointments come from this “magic circle,” such as that of the new secretary of the Secretariat for the Economy, Maximino Caballero Ledo.

Pope Francis trusts few collaborators, and it will be to them that one will have to look to understand how he intends to act. After asking Becciu to resign, he called Marcello Semeraro, later created cardinal, to Rome to lead the Congregation for the Causes of Saints. When he imposed a ring and a hat on him at the consistory on 28 October last, the Pope was heard saying to him: “Be good.”

During that same consistory, Pope Francis loudly emphasized that he was creating cardinal a parish priest, Monsignor Enrico Feroci, who had been president of Caritas in Rome and who will continue his parish service. It was nothing new. Paul VI had already done it when he created Cardinal Giulio Bevilacqua. But the fact that the Pope wanted to emphasize it was a signal: Pope Francis wanted this to stand out, for him to be noticed.

It can therefore be foreseen that every gesture of the Pope will be followed with particular emphasis, and made to stand out by the Vatican Communication Department which is, it is true, giving greater attention to the episcopates of the world, but which ultimately subsumes the Vatican on the figure of Pope Francis, in an institutional communication that at times seems to confuse the position with the institution.

2021 will therefore be a year of difficult interpretation, that Pope Francis seems already set to take on, having already approved a trip to Iraq in March 2021. Covid permitting, it seems that a trip to Serbia and one to Kazakhstan are also being considered, without discarding Lebanon and South Sudan as other possibilities always open.

If the consensus reasoning is valid, the Pope’s trips will also be chosen accordingly. However, the problem will be to see if Pope Francis will get a genuine, not formal, consensus. After all, everyone is faithful to the Pope. This does not mean that everyone agrees with him. Should Pope Francis in 2021 distinguish between opportune criticism and that from those who want to manipulate him, he will be able to reform the Curia and some aspects of the Church. Otherwise, his pontificate will, in the long run, be characterized as a transitional pontificate: many innovations, many gestures, very little substance.