Pope Francis, the Latin American paradox Pope Francis and the response to coronavirus

Pope Francis, what will his legacy be? 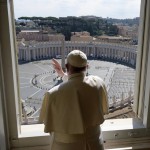 The seventh anniversary of Pope Francis’ pontificate was celebrated in a surreal scenario. There are no public masses because of the Coronavirus pandemic, and the Diocese of Rome even got to the point to order to shut down the Churches, and then reconsidered the decision. Pope Francis was compelled to pray the Sunday Angelus and preach the catechesis of the general audience from the library of the Apostolic Palace, to avoid the gathering of a crowd. For the first time in years, there is this feeling of being catacomb Christians that must be hidden to avoid an invisible, but real, enemy.

The truth is that all of these topics were almost out of the discussion. The publication of the exhortation Querida Amazonia seemingly turned off the enthusiasm of the most animated reformers, who understood that Pope Francis could not, in the end, be considered a progressive.

Yes, the next Synod will be in 2022 and on synodality. It is, however, a far, outside of reach event, and people are approaching it without any illusions that it will bring substantial changes.

The Curia reform is instead stalled and continually moving back and forth. On March the 6th, the establishment of the centralized personnel office within the Secretariat of State was announced. On March the 7th, the announcement was recalled. On March 6, the new office was described as a “highly relevant step in the path of reforms initiated by Pope Francis.” On March 7, however, the press office released a statement “specifying” that what was announced as a fait accompli was only a” proposal” currently under Pope Francis’s consideration, and that the pope had yet to decide whether to establish it.

After seven years, it seems that the pontificate ran out of great topics, great themes. All of the debates seem to be focused on specific topics, but not global issues.

It is not all Pope Francis’ fault. The polarization of communications is a major contributor. The debate is now split on two different fronts, both focused on details rather than on a global response of the Church. Under Pope Francis, the labels “conservatives” and “progressives” came back into fashion. These two categories had seemed overcome after the great season of the Second Vatican Council debate.

It seems that the main issue was lost in favor of details. The main point is faith. Pope Francis always pushed for a missionary Church and did everything he deemed suitable to make this push concrete. His last decision in this regard was to add to the formation of the future nuncios (Papal ambassadors) a year in a land of mission.

However, this missionary push does not seem to go in-depth to the reason for being of faith. In 2014, the missionary Fr. Piero Gheddo, commenting on the shut down of the missionary magazine Ad Gentes, warned that the missionary push was generally lost because the sense of mission was lost. Missions, he said, seemed to be social services agencies, with no room to talk about the Gospel.

Pope Francis has always warned about the risk of the Church turning into a merciful NGO. However, the lack of an intellectual push within the pontificate leads everything to be reduced to charitable actions or Pope Francis’ gestures.

Pope Francis always calls for evangelizing to proceed by example, and many of his initiatives were born with the idea of setting an example. For instance, the initiative of the Friday of Mercy was taken to shed light on the good works of the Church.

To set a good example is also the rationale behind Pope Francis’ meetings with the Orthodox Patriarchates, the joint declarations, the exchange of relics, the connection with the Islamic world through the al Azhar University, the Abu Dhabi declaration, and the ecumenism of charity.

All of this is important and necessary. The pontificate lacks, however, an intellectual push. Since nobody leads the debate, the debate is biased by a series of forces that have always tried to bend the discussion, and hence the Catholic Church, to their will.

In seven years, Pope Francis has often been over-interpreted, deprived of his real nature. Pope Francis’ worldview is above all that of an Argentinian, then a Latin American, and then a Jesuit.

Paradoxically, a pontificate born during the Year of Faith with the wish of being missionary leaves a political legacy instead of a spiritual one. Pope Francis thought is indeed political and pragmatic, while his spirituality is mostly popular piety.

At its seventh year, while everything is stuck because of adverse circumstances, one can notice a fossilization of the pontificate. It is always about the same issues, with the debate in the papacy not reaching real problems.

At the moment, his legacy cannot be assessed. He fought to break careerism, but he mostly raised the stakes on institutionality. He worked to reform the Curia, but this reform seems to be a never-ending discussion. He flirted with progressive intellectuals, but he then made traditional choices. He spoke about synodality, but he has always been a man alone at the helm.

A final judgment on Pope Francis will come after a clear assessment of all of these issues. At the moment, identifying a legacy is complicated. Only history will tell.

3 Responses to Pope Francis, what will his legacy be?