Easter, will the Church be risen again? Pope Francis, the end of transition?

Pope Francis, what will the Curia reform look like? 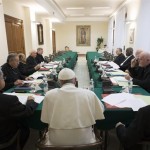 The draft of Praedicate Evangelium, the new apostolic constitution that will regulate functions and tasks of the Curia offices, has already been delivered to presidents of Bishops’ conferences, superiors of religious congregations and heads of Curia offices. The draft is circulating and a date has been set for Pope Francis to sign the new constitution: June 29, the feast of Saints Peter and Paul.

Leaks confirm what had been already discussed.

The “missionary” super-dicastery should result from the merging of the Congregation for the Evangelization of Peoples (Propaganda Fide) and the Pontifical Council for Promoting the New Evangelization. It is yet to be decided if the new dicastery will keep the economic-administrative authority of Propaganda Fide, that has enjoyed financial independence since its foundation in order to manage its work in lands of missions more appropriately.

The new dicastery on charity would be nothing else than the elevation of the rank of the office of the Papal Almoner. In a June 2018 interview with Reuters, Pope Francis already announced that the Almoner was going to be always a Cardinal and that the Pope’s charity could be handled in a bigger office. Now, it is important to understand how this office will work and if will absorb the function of the no longer existing Pontifical Council Cor Unum, that is now part of the Dicastery for Promoting Integral Human Development.

As there will be not a distinction between pontifical councils and congregations, everything will be renamed a dicastery. Since all of the dicasteries will be on par, there will not be a dicastery more critical than others. Commenting on the upcoming reform, some cardinals underscored that the new missionary dicastery would be more important than the Congregation for the Doctrine of the Faith. Such a position seems to be ideological in nature.

A Curia composed by dicasteries would then mean that in the end, the importance of a dicastery will mostly depend on the emphasis the Pope will give to, for instance, issues of the doctrine of the faith, charity, or poverty.

All of these reforms are not born out of thin air. Some decisions anticipated them.

According to this first project, the coordination among dicasteries was going to be managed by the General Secretariat of the Synod.

Not by chance, Cardinal Baldisseri, general secretary of the Synod, was entrusted with coordinating some of the first meetings of the head of dicasteries. Not by chance, Baldisseri was created a cardinal almost immediately after his appointment as general secretary of the Synod. Moreover, finally, not by chance, Cardinal Baldisseri was the second in the list of the new Cardinals in that consistory. The fact that he was second only to Cardinal Gerhard Ludwig Mueller, then prefect of the Congregation for the Doctrine of the Faith, was not just a detail.

The same Pope Francis said in the June 2018 interview with Reuters that the Pope’s two arms are faith and charity. So, the doctrine of the faith is essential. When Pope Francis appointed a new CDF prefect, Luis Antonio Ladaria, he immediately vested him the red hat.

Beyond any ideological readings, the first project of making the Secretariat of State less central failed.

On the one hand, the Secretariat of State, led by the skilled Cardinal Pietro Parolin, took over the transition and guaranteed continuity, asking and getting from Pope Francis a series of documents – chirographs, rescripts – that clarified norms and situations. On the other hand, it became evident that central coordination is needed.

Pope Francis’ reform is generally comprised of two phases: an ideological phase and a phase of real implementation, that goes beyond ideology.

All the reforms of this pontificate followed these two phases. An example is the recent review of the statute of the Vatican general auditor. The new law places the office within the Curia offices, overcoming the company-like ideology that made the auditor independent, as a body outside of the Vatican state.

Will this process of trials and errors be applied to the new constitution? Likely, it will be.

Many are surprised by Pope Francis’ wish to sign the draft on June 29. It was thought more time was needed to get feedback from conferences and then have this feedback discussed and embodied and harmonized in the draft.

Now, it seems that the draft will be published and will be then further adjusted, as is customary for Pope Francis’ reforms: the Dicastery of Communication changed, the Dicastery for Laity, Family and Life had its statute updated.

So, we should expect other motu propri and adjustments, according to Pope Francis’ rationale that “the reform is made while walking.”

The moment when the reform is going to take its final shape is also the moment of indecision. The new structure of the Curia is said to be established for a 25-year term. However, a new pope might overturn everything, as no pope can make decisions for his successor.

The reform will be certainly discussed, perhaps in a consistory to be convoked before the rumored consistory for the creation of new cardinals. It is clear that Pope Francis’ reform is that of the profile of bishops. This reform might also touch the college of cardinals.

The college of cardinals under Pope Francis is the most representative by continent ever, and at the same time is the most unpredictable ever in internal balances.

Since 2015, Cardinals had not had the occasion to meet. In picking new Cardinals, Pope Francis went beyond any expected choices. He looked at the personal profiles, rather than at the seats they occupied. Many of these new cardinals are unknown to colleagues who already have a red hat.

The global climate is that of uncertainty. It is paradoxical this climate is spreading more and more while Pope Francis is going to launch a reform the Cardinals vocally asked for in the pre-conclave meetings.

Will Pope Francis leave everyone disappointed? Alternatively, will he really give the Church a new shape?

One Response to Pope Francis, what will the Curia reform look like?