Pope Francis, where is the pontificate? 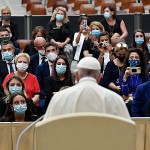 What is happening to Pope Francis’ pontificate? Many ask this, especially after Alberto Melloni wrote a long piece in Repubblica that started from Pope Francis’ “unmatched Christian authenticity” and went so far as to predict a “storm” after making a list of several contradictory decisions of this month, defined as “a black June.”

It is an article to consider for various reasons. The first: Alberto Melloni is not just any author. He is a leading exponent of the “School of Bologna,” which created the narrative of the Second Vatican Council as a moment of rupture in the history of the Church. Beloved in progressive circles, Melloni is an early supporter of Pope Francis. Moreover: he is an authoritative supporter of Pope Francis.

The second reason: the article appeared in Repubblica, the Italian left-wing newspaper founded by Eugenio Scalfari. Scalfari proclaims himself the confidant of the Pope; he has published several times interviews or excerpts of conversations with the Pope, although admitting that he never faithfully reports the words of Pope Francis, but rather offers a free interpretation. Repubblica was, however, one of the media that supported the pontificate of Pope Francis the most, especially for that attention to the poor and migrants that seemed to fit perfectly with the political needs of the pontificate.

The fact, therefore, that such an author, and from such a newspaper, comes out publicly to speak of a possible “storm” in the pontificate signals that Pope Francis no longer has only the alleged resistance of those who see things differently from him. Even among those considered friends, the front has split, and everyone is ready to fight against other decisions of the Pope that they do not share.

The message launched by the Pope is not contested. The idea of a poor Church for the poor that goes to the peripheries is not called into question. Pope Francis has a pragmatic vision of the Church. The institution and the defense of the institution, for Pope Francis, are secondary because the Pope does not want to give the impression that the Church is a court. At the same time, the Pope uses his influence to support or not support particular political views. Although he is very firm when it comes to abortion or life issues, these are no longer part of his political discourse, which focuses on concrete situations such as helping the poor, marginalized peoples, or migrants.

All this has remained unchanged, and that progressive world that has always supported this, does not object. However, the problem of the government of the Church remains. In government, Pope Francis demonstrates a ruthless egalitarianism: he treats friends and enemies alike, depending on the circumstances and convenience. The Pope can suddenly abandon friends he has always defended, and approach people he has always kept at a distance.

Suffice it to think of Archbishop Gustavo Zanchetta, called to Rome with an ad hoc position as an assessor at APSA, and then apparently (there is no official declaration about that) losing his office without an announcement after he had received full support also for his trials in Argentina.

Or think of the exile imposed on the founder of Bose, Enzo Bianchi, who was also held in high regard by Pope Francis. The Pope had called Bianchi to participate in three synods; there was even talk of his appointment as a lay Cardinal. In the controversy that pitted the founder of the Bose community against his community, the Pope did not hesitate to take sides with the community, support the inspector’s decision to send Bianchi into exile, and never take a step back.

Of course, the Pope then wrote a touching letter to Enzo Bianchi, comparing his experience to that of Christ on the cross. The letters, in the end, are part of Pope Francis’ mode of governance. The Pope shows proper support through the letters, but in reality, it is only a consolation prize for those who must be let go.

Pope Francis rejected, also with a letter, Cardinal Reinhard Marx’s resignation as archbishop of Munich and Freising. The letter dwelt at length on abuses – also the center of Cardinal Marx’s resignation letter – and spoke of the need for reform. Still, in the end, it announced that not only the resignation was rejected, but that the Pope asked the Cardinal to continue to be bishop and priest, as archbishop of his diocese. Whoever appears to press the Pope to do something, suffers the same fate: “A prisoner or dead,” as commented by the Argentine website The Wanderer, that has always carefully interpreted Pope Francis’ moves in a Peronist key.

According to Melloni, Marx’s resignation amounts to a request for the resignation of the Pope. There may be pressure on the Pope to resign, especially now that it has become clear that – rightly – the Pope is not bound by anyone’s interests, not even those of his friends. The fact is that, by just saying it, Melloni launches an eventuality. In the end, the progressive front makes the exact requests to Pope Francis that Archbishop Carlo Maria Viganò made in his first testimony at the end of World Family Day. The same accusations of inconsistency are launched against the Pope.

All while the Pope is dismantling a system. Melloni refers to the decision on the movements, which will now no longer have the same president for more than ten years if not a founder. But he refers, above all, to the letters rogatory that led to searches in the diocese of Ozieri to investigate alleged embezzlement carried out by Cardinal Angelo Becciu. The Pope asked him to resign and to renounce cardinalate prerogatives based on never specified accusations. But the diocese of Ozieri, which would receive the benefits, had never denied any documents to the Vatican gendarmerie.

It is surprising, therefore, that these had to be acquired through an international letter rogatory, this time accepted, creating, in any case, a juridical precedent that cannot fail to put the Holy See at risk as regards the immunity of its priests and bishops. There is, in fact, a principle of reciprocity in international letters rogatory, as Melloni notes.

The pontificate of Pope Francis has now given unlimited power to the judges. They are Italians with positions in Italy, who have no interest in protecting the institution of the Holy See, but rather in showing their zeal, maintaining good relations with Italy and with Italian friends.

For the Pope and for the Vatican system that surrounds him, the priority now seems to be  to reject criticism, and to seek protection behind a defensive wall. The Pope trusts people less and less and is increasingly sensitive to any criticism. His method is, therefore, to create pressure.

Hence the new modus operandi of sending inspections to the dicasteries that are about to change heads, and to do it shortly before the change: it happened with the Congregation for Divine Worship; and with the Congregation for the Clergy, whose new prefect has been appointed while the inspection, led by Bishop Egidio Miragoli, is still in progress.

And then there is the appointment of Fr. Luigi Maria Epicoco as an ecclesiastical assistant in the communication department. Don Epicoco, a friend of the Pope, was appointed to the post after the Pope had two private audiences with Andrea Tornielli and Andrea Monda, editorial director and director of the Osservatore Romano. The Pope criticized the dicastery in public, wondering who was listening to its voice. So could it be that the Pope wants to start changing the leadership there too?

There is this climate of uncertainty in the Vatican. The Pope seems isolated. But he is a Pope stronger than ever, who can change various Curia leaders without making it appear like a spoils system. And that, after all, is already preparing the way for the Conclave that will elect his successor.

3 Responses to Pope Francis, where is the pontificate?