Pope Francis, why a “liquid” pontificate is not possible 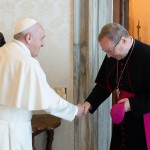 The great Polish sociologist Zygmunt Bauman, who passed away in 2017, coined the expression “liquid society” to describe today’s society. That is to say, a society in which everything is relativized, in which every point of view is valid and relative, and in which one does not proceed according to one’s convictions but is convinced to take this or that position.

The liquid society is the extreme result of the individualistic world, which wants to guarantee rights to all and, in doing so, imposes a dictatorship against those who oppose some of these rights and who demonstrate that these rights are not natural but artificial.

If the Church is also the mirror of society, as is true, then the risk is that the approach of the men of the Church is precisely that of a liquid society. That is to say, an approach less rooted in the doctrine and faith of the fathers and more ingrained in transient sentimentality or the idea of mercy. Of course, right and wrong remain, but they are vague background concepts, which among other things, cannot be proposed, let alone imposed, on anyone.

The effects of this approach have also been seen during the pontificate of Pope Francis. Pope Francis used a particularly “fluid” approach to situations, showing chameleon-like abilities to change his mind and very clever stances that did not amount to taking a position.

For example, Pope Francis’ diplomacy is “fluid” when it focuses everything on personal relationships with heads of state or governments. Then he believes that his mere presence in China, in Moscow today, could be sufficient to guarantee religious freedom and a ceasefire, because it is important first to open processes. Pope Francis looks for new partners when he sees that partners change course.

Even Pope Francis’ path of reforms is “fluid” because it went on by trial and error, with a general idea of wanting an outgoing Church, but certainly without an actual structure of thought which cared about history, tradition, and the tasks of the institutions that were going to change. In fact, Pope Francis has instead used more often the system of motu proprio to legislate.

Finally, there is the approach to significant issues, carried out with light tools, such as apostolic letters or apostolic exhortations. Pope Francis personally works to break every possible structure of power or resistance. Yet, in doing so, he does not care about international relations and puts the institution itself at risk – see the possible consequences of the recent Vatican trial.

They are approaches to the world; history will tell if they are right or wrong. Indeed, history has already shown to Pope Francis that there cannot be a “liquid” pontificate because this creates more problems than solutions.

A history that has come to the fore in the form of the Synodal Path of the Church in Germany. In practice, to respond to the crisis of the Church, which is also a crisis of the faithful, the Church in Germany has convened a Synod, stressing that its decisions on issues such as sexuality and the priesthood would be binding. Pope Francis had sent a letter in 2019, underlining that those decisions could only be taken up by headquarters. Nevertheless, the German bishops continued on their path. And so they went ahead with a series of proposals.

It must be said that Pope Francis wanted to open the synodal path all over the world because the Synod on synodality has seen several local Churches present themselves with border-line proposals. The French bishops arrived having hired an external consultancy firm to mediate disagreements, and the Swiss bishops adopted recommendations similar to those of the German Synod. The Belgian bishops were not far from the German proposals too.

They did so, however, within a synodal process, with the idea of bringing these ideas to the table of the General Synod. On the other hand, the Synod of the Church in Germany intends to continue its path and conclude it on its own.

And so, a second letter was needed, a declaration from the Holy See published on 21 July, which began by saying that “to protect the freedom of the people of God and the exercise of the episcopal ministry, it seems necessary to specify that the Synodal Way in Germany has no power to oblige the Bishops and the faithful to assume new ways of governing and new approaches to doctrine and morals.”

The letter explained that “it would not be lawful to initiate new official structures or doctrines in the dioceses before an agreement agreed at the level of the universal Church, which would represent a wound to ecclesial communion and a threat to the unity of the Church.”

And concluded with the hope that “the proposals of the path of the particular Churches in Germany will converge in the synodal path that the universal Church is taking, for a mutual enrichment and a testimony of that unity with which the body of the Church manifests its fidelity to Christ the Lord. ”

This stance speaks of a need for clarity. However, given that Pope Francis did not sign the declaration, it can also be said that it was not he who wanted it and that he instead wants an authentic renewal in the Church and that the Curia is blocking his project.

The fact that the letter avoids putting the Pope in the forefront does not mean that the Pope disagreed. Indeed, he agreed. Otherwise, the letter would not have been published. After all, even Pope Francis knows that a “liquid” pontificate can exist, perhaps, on issues of lesser importance. But when it comes to doctrine, at some point, it has to go back to making solid and concrete decisions. Otherwise, you risk chaos. And it is chaos that has already occurred in many cases.

2 Responses to Pope Francis, why a “liquid” pontificate is not possible