Pope Francis, gestures as a response to the institutional crisis Pope Francis, the challenges he will leave as his legacy

Pope Francis, why are there those who still speak of anti-popes? 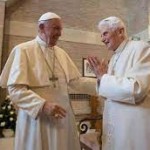 After Benedict XVI’s renunciation from the pontificate and the election of Pope Francis, there have been many speculations on the validity of the renunciation of the now Pope Emeritus. And even in the past month, the possibility that Pope Francis is an anti-pope has made its way through the Italian press.

In summary, this is the theory, as explained by Andrea Cionci: Benedict XVI, pressured by the globalist and Masonic powers, has feigned a renunciation to expose the enemies of the Church. Pope Francis, who would have been elected with an irregular vote (and in fact it has been reported that the vote was repeated quickly after one more vote than expected was found) would therefore be the anti-Pope.

Benedict XVI would have left various clues regarding this. First of all, the declaration with which he announced his resignation from the pontificate has various errors, promptly noted by the Latinists. He continued to wear the white cassock, although without the symbols of the ministerium (Papal ministry), but holding those of the munus (the role). He kept addressing the public, although his words are not vehement or antipapist and in no way are intended to create a counter-narrative. Several times Benedict XVI has said that “the Pope is one,” without however ever mentioning Pope Francis.

There would also be external clues: Cardinal Danneels’ statements about the St. Gallen Mafia and the intention to overthrow Benedict XVI; the book by Austen Ivereigh, biographer of the Pope, which explicitly speaks of a “Bergoglio team” which aimed to prepare the election of the archbishop of Buenos Aires; and the words of Archbishop Georg Gaenswein, private secretary of Benedict XVI.

Gaenswein first underlined, at the presentation of a book, that there was, at the election of Benedict XVI, a party of the Salt of the Earth that was opposed to the so-called Mafia of St. Gallen. These were two groups of Cardinals, backing different positions and views for the papacy. Benedict XVI was in the end was elected after only four ballots following a dramatic struggle between the so-called ‘Salt of the Earth Party’ gathered around Cardinals Lopez Trujillo, Ruini, Herranz, Rouco Varela and Medina, and the so-called ‘St. Gallen Group’ gathered around Cardinals Danneels, Martini, Silvestrini and Murphy O’Connor – a group that Cardinal Danneels himself recently amusedly described as a sort of ‘mafia club’.”

Beyond the conspiracy theories, one wonders why ideas on the legitimacy of Pope Francis’ pontificate are spreading more and more. The conspiracy theories did not arise immediately, but developed over time. It may be that this stems from an initial distraction. It probably does not. Basically, doubts about Benedict XVI’s Latin in the declaration were immediately raised.

The truth is that the pontificate of Pope Francis is a rather divisive pontificate. The Pope knows how to concentrate very well on the penultimate issues, and in this he also receives the sympathy of those circles that are said to be behind the pressures for the resignation of Benedict XVI.

The problem is that Pope Francis often doesn’t talk about the last things. He speaks of migrants, the poor, the marginalized. He rarely speaks of the Gospel with a mystical depth. The faith of Pope Francis is a popular faith, which is not nourished by doctrine and which basically gives little importance to doctrine. There is a strong Catholic tradition behind it. But it remains, in fact, a tradition at the base, not enough to strike the personality of the Pope himself. The Pope is for popular piety and the so called theology of people. Doctrine will come.

Those who seek different answers from the Church, and have had them in previous pontificates, cling to the hope of an anti-Pope. They have the right to do so, because legally nothing has been done to clarify the question.

Pope Francis, however, has never convened a Synod on the subject, nor did he want to legally define the role of Pope Emeritus. It could be argued that Benedict XVI did not do the same. Benedict XVI, however, did not want to tie the hands of his successor. He created a precedent, he did not want this precedent to be defined by himself. In his last speech to the cardinals as Pope, he promised obedience and reverence to his successor.

Pope Francis wanted Benedict XVI to have a role in public life. He said this in his interview with Corriere della Sera in 2014, and has always shown his intention to make Benedict XVI as visible as possible. For his part, the Pope Emeritus always intervened on tiptoe, only when he was urged, without ever creating problems within the Church.

There is, therefore, a space to talk and to reflect on the topic. The reflections of Benedict XVI’s resignation are discussed by a large group of intellectuals, with various publications that try to understand the reason for the resignation and how it must be received.

Did Pope Francis want to create confusion? Probably not. Simply, Pope Francis did not give particular importance to the legal question. This is not a new thing. Often, Pope Francis backtracks some initiatives, adjusts them in mid-course, and always does so before a clear and institutional picture of events is outlined.

Pope Francis is provocative when it comes to speaking in public, when he – without contradicting himself – can explain his gestures, his ideas. On institutional issues, however, Pope Francis has shown rather to be instinctive, to adapt as he goes. He has a plan, but he doesn’t have a specific plan. He knows where he wants the Church to go, but he hasn’t set up all the appropriate institutional frameworks, and he won’t. This can be a limitation.

Pope Francis’ pragmatism has led to bewilderment in many situations. For example, in the post-synodal exhortation Amoris Laetitia, where everything remains open. But also in the way of addressing the issue of fraternity, or the first meeting of a Pope with the patriarch of Moscow, when a joint declaration that was completely unbalanced on the Russian side came out. Pope Francis justified himself by emphasizing that it was a purely “pastoral” initiative. It couldn’t be.

Pope Francis is not the antipope. Benedict XVI is no longer Pope. Yet it must be admitted that the confusion over roles also arises from a confusion created by the pontiff himself.

5 Responses to Pope Francis, why are there those who still speak of anti-popes?