Pope Francis, why is his Pontificate always a battlefield? 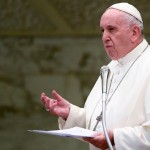 Events regarding the Pontifical Theological Institute John Paul II have generated a further drift between two camps that have been up in arms during Pope Francis’ Pontificate. On the one hand, those who look for the continuity in the magisterium, on the other hand, those who stress that Pope Francis’ Pontificate broke – or is willing to break — with the teachings of the magisterium,

This divergence nothing new. It already took place during the Second Vatican Council. This kind of opposition brings each side to instrumentalize any situation. The last example is the news that Monsignor Livio Melina, former president of the John Paul II’s Institute, paid a visit to Benedict XVI. This was considered proof that the Pope emeritus is actively opposing Pope Francis.

This way of reading the facts is an instrumentalization, and so is the interpretation that the two pontiffs oppose each other. There is no opposition, since Benedict XVI has always strongly professed his full obedience to Pope Francis. Pope Francis and Benedict XVI meet more often than reported, and they trust each other. They are undoubtedly different people, with different approaches. However, exploiting and instrumentalizing their differences helps to divide the Church.

The issue of the Pontifical Institute John Paul II became another battlefield on which the discussion on the future of the Church is played out. It is striking that it is impossible to counter the narrative that is said to be close to Pope Francis’ spirit. It is impossible despite Pope Francis never really saying a word on the issue.

Is this the sign of an ongoing transition? Let us trace back the facts to understand the issue.

On July 19, the finalization of the drafting of the statutes of the Pontifical Theological Institute John Paul II is announced. Established by Pope Francis in 2017 with the motu proprio Summa Familiae Cura, the new Institute stands at a higher rank than the John Paul II’s Institute for Studies on Marriage and Family. Pope Francis’ motu proprio also requires more comprehensive teaching, which included social sciences and not only moral theology. Pope Francis’ has been asking for that since Evangelii Gaudium the apostolic exhortation that is a sort of guiding document for the Pontificate.

When Pope Francis established the new Institute, he decided that the statutes had to be discussed within the Institute itself. And the discussion started with a committee, which included the new top ranks of the faculty, among them Monsignor Livio Melina, the former president and still a teacher at the Institute. Mons. Melina impersonates the continuity within the Institute founded by St. John Paul II.

The new curricula did not meet the approval of all the professors. There are new classes, open to social sciences, as intended. However, the teaching of moral theology is sharply reduced, as professor José Granados explained in an interview granted to Catholic News Agency.

Professor Granados underscored: “In the official statement of the Institute issued on July 29, it is said that moral theology finds a new placement and it is pointed out that there are two chairs of morality, the morality of love and marriage, on the one hand, and the ethics of life, on the other. What is not said is that, according to the old statutes, there were already two chairs that covered these subjects (a chair of special morals, for sexuality and marriage, and one on bioethics). Nor is it said that in the new curriculum the morality of marriage… now have only three credits, half that of most other chairs.”

Professor Granados then concluded that “Morality, therefore, has been reduced by half and not only that: they have fired the teachers who taught it: Melina, Noriega and, for bioethics, Maria Luisa di Pietro.”

The new statutes are announced on July 18 and 19. The Congregation for Catholic Education had previously approved them on July 2. They are not published on the website of the Institute until July 23. Formally, no one is fired. The previous Institute ceased to exist, and so all its work contracts. The professors are not hired by the new Institute.

However, the procedures followed make it look like a purge. The purge never actually happened, but one article published on Avvenire, the Italian Bishops’ Conference newspaper, seems to confirm this notion.

The article is the response of the journalist Luciano Moia to the letter by Monsignor Melina, who complained about the allegation that there was an attempt of “minimizing the impact of Pope Francis’ shift.”

The article was published on Aug. 2. In it, Moia identifies every stage at which Pope Francis’ shift was minimized. In particular, Moia criticizes the book “Quale pastorale familiare dopo Amoris Laetitia?”, a collection of papers curated by professor Melina. Moia also points the finger to the book “Amoris Laetitia, accompagnare, discernere, integrare,” curated by professors Granados, Kampowski and Perez Soba.

The thesis is that every interpretation of Amoris Laetitia based on the continuity with the magisterium is not only wrong, but – even worse – not consistent with the spirit of Francis’ Pontificate, and for this reason subject to censorship. For this reason, the new professors were not contracted again, Moia seems to hint.

The thesis is disproven by the fact that Granados and Kampowski will keep teaching in the new Institute. There are diverse view, but these are nuanced. There are many odds at stake.

One of the new professors of morality will be Maurizio Chiodi, who already sparked controversy by advocating some magisterial changes in light of Amoris Laetitia. Hiring him “could be somewhat considered a bit of a provocation,” admitted a person within Archbishop Paglia’s entourage. Archbishop Paglia is the Grand Chancellor of the Institute.

If hiring Chiodi could be a provocation, not continuing with the classes of morality and on natural regulation of births was also likely a mistake. Amid a general crisis of pontifical universities, that struggles to enroll new students, the class on natural birth regulation had 100 pupils per year, while the teaching of the morality based on the St. John Paul II’s theology was very attractive for students.

Why, in the end, changing the pattern? And why do that this way? Pontifical Universities are not only academia. They are a community of students who maintain a close relation with the professors. Often, professors are the equivalent of spiritual fathers. The dismay of students, who signed a letter to ask for an explanation, is not surprising.

The issue is then whether it was possible or not to apply Pope Francis’ decisions and at the same time keep the curricula and the identity that were the strength of the John Paul II Institute.

This question is raised by many, among those who are faithful to tradition and those who believe that Pope Francis changed something.

This question, however, is final. The discussion raised after the events regarding the John Paul II Institute is food for thought.

None of those who participated in the discussion showed a real interest in the fate of the Institute. There were no theological discussions or a focus on a specific topic. It has never happened, during this Pontificate.

There is now a narrative that portrays an anti-Francis lobby that wants to block changes. Books attacked (or will attack) “American lobbies” that are allegedly plotting to attack the Pope.

In the end, the real issue is whether or not there is a possibility for a frank discussion within this Pontificate. Benedict XVI, once more, risks to be under attack only because those who are promoting the shift find in him a scapegoat for their failure, and see his presence as a threat because he is a reference point for many.

Benedict XVI never wanted to take on this role. He met professor Melina, and he showed interest for the John Paul II institute, that he followed since its origins. He tried to understand what was going on. He never tried to interfere with Papal decisions. His mere presence is, however, considered dangerous. Once, the “Pope Francis’ spirit supporters” even called for preventing the Pope emeritus from communicating publicly.

Perhaps, the transition at the St. John Paul II Institute could have been handled differently. In the end, the two souls of the Institute could be combined, in order not to lose a heritage and not to get build walls.

In the end, those who defend Pope Francis and a Pope Francis’ shift are putting the Pontificate at risk, as they give an almost absolutist portrait of the Pontificate. Pope Francis speaks about pastoral conversion and carries forward a transition following the model of a Church he is shaping. It is yet to be assessed if he believes in the way some people are moving forward to his reforms.