Pope Francis: The Push To Synodality Help! Theology Needed to Reform the Curia

Pope Francis: Will It Really Be a Revolution? 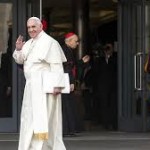 The week that begins today and ends with the creation of 20 new cardinals may represent the turning point of Pope Francis’ pontificate. The choices of the new cardinals not only show Pope Francis’ sensitivity toward the world’s peripheries and a certain pastoral approach, they also indicate a change concerning the pivotal issues at stake in this papacy. This change cannot be underestimated.

Before the arrival of Pope Francis, the main themes of discussion in the Church have had solid theological roots. But even the question concerning the pastoral care of divorced and civilly remarried Catholics, as well as for homosexual couples – both of which were the object of a heated debate at the last Synod of Bishops – are in the end based on theological foundations, and deal with the application of doctrine. Moreover, even the criticisms aimed at the pope’s plan for curial reform – the other issue at currently at stake in this pontificate – are founded on theological and juridical grounds.

Nevertheless, Pope Francis demonstrates that he is moving on completely different grounds. It is not by chance that one of his favourite quotes about ecumenism is taken from the conversation between Bl. Paul VI and the Patriarch of Costantinople, Athenagoras: “If we were to close ourselves off in a room together and leave the theologians outside, we would accomplish ecumenism in one hour.” In similar fashion, leaving theological discussions aside, Pope Francis wants to propose a model of a Church that evangelizes through attraction, and not because of the strength of its concepts.

Pope Francis’ choices in two consistories mirror this intention. Beyond choosing a few candidates with strong institutional ties, Pope Francis has selected as cardinals mainly bishops whose primary interest is not found in some or other theological position, but in pastoral practice. Pope Francis’ Church bypasses theological discussion and aims at going straight to the heart of the people.

All of these new cardinals will bring their peculiar perspectives to the consistory the Pope has convened to discuss reform of the Roman Curia. The reform seems to be stuck. The first comprehensive draft was highly criticized by Vatican dicasteries, and there is a real risk that the structure will remain as it is for the moment, in expectation of a definitive change that will not take place before the end of this year – as Pope Francis has admitted. Nevertheless, another option that one insider designates “St. Peter’s option” may be explored.

It can be explained this way. During the construction of the current Basilica of St. Peter in the 16th century, the old basilica was only gradually dismantled, step by step, while it was replaced with the new building. This is the way Pope Francis works, by establishing new structures around the currently existing structure which is then removed once the new structure is complete.

Through this lens we can better understand the process by which the Vatican at first hired expensive external commissions and then followed this step with the establishment of the Secretariat for the Economy, the Council for the Economy and the Pontifical Commission for the Protection of Minors. These bodies were born without statutes and they set out to work while waiting for their specific powers and competences to be drafted.

This is way curial reform will be carried out. According to sources, during their recent ad limina visit, the Lithuanian bishops asked Pope Francis about the reform. He replied that two super-congregations, respectively, for Justice and Charity and Laity and Family will be established. How the competences of the many minor dicasteries that will be subsumed into these new Congregations will be arranged is yet to be decided. But establishing them is a first step toward the much anticipated Curia reform.

The rationale is that the Curia structure must be reduced in size in order to be closer to people. Beyond the theological discussions that characterized the major curial reform begun under Bl. Paul VI and concluded under St. John Paul II, Pope Francis’ reform is mostly intended to be functional in order to extend the voice of the Church to “the end of the world” from which the Pope hails. For Pope Francis there is no need for structures, instead there is a need for a credible witness.

This rationale is reflected in his choices of new cardinals. Up till now, several keys to reading Pope Francis’ picks over the last two years have been suggested. It was argued that he wanted to privilege the geographical peripheries of the Church, or that he wanted to combat careerism, and that for this reason he was not awarding the red hat to bishops in dioceses that have always had a cardinal by tradition, or else that he wanted to internationalize the College of Cardinals.

All of these reasons are intriguing and even true if one glances at the cardinals’ profiles from the perspective of their assignments or their geographical locations Nevertheless, these interpretations may be misleading and may even betray Pope Francis’ spirit.

Broadly speaking, the Pope selects bishops whom he appreciates for their pastoral touch. In a recent interview, the archbishop Soane Patita Mafia of Tonga, a surprise pick among the new cardinals, emphasized that he will take with him to Rome the cry of poor of his country. He is not the only one. Cardinal-designate Francis Kriengsak Kovithanij of Bangkok, Thailand  is working to foster small Christian communities in a country where Christians are a very small minority.

Pope Francis got to know many of these new cardinals during the last Synod of Bishops. He appreciated their human touch and their pastoral sensitivity. More than what they currently do in their homeland, the impression they gave when they took the floor at the synod, the way they defended and supported mercy and closeness to people, were crucial to their selection.

Still, no theological preference seems to drive Pope Francis’ choices. Instead one finds a human touch, a peculiar instinct that guides the Pope in understanding who the prelates are with whom he feels more at ease.

Renunciation of worldliness may also imply for Pope Francis a renunciation of intellectual debate. Pope Francis wants shepherds with the smell of the sheep, and he had been clear about this since the beginning of his pontificate. Other qualities do not seem to matter that much to him; they seem to be mere add-ons that he applies to his discussion of bishops when it suits him to do so.

These new cardinals (Pope Francis has chosen some 40 to date) will have an impact in this coming week’s consistory on curial reform. Now that the Council of Cardinals has met eight times, the Pope is seeking a turning point, and in order to bring this about he is filling the College of Cardinals with a considerable number of individuals whom he believes share his vision.

Although the reform issue might be solved with the so-called “St. Peter’s option,” the struggle over the upcoming Synod seems more complicated. Once again, Pope Francis’ intention is to free the Church from an over-dependence upon doctrine in order to find a pastoral approach that will bring the Church closer to people. But how can doctrine and pastoral practice be reconciled?

This continues to be a hotly debated topic. The discussion evidences a strange convergence between the Roman Curia and some local Churches, many of which, ironically speaking, are on the peripheries. Not by chance, Cardinal Lorenzo Baldisseri, General Secretary of the Synod of Bishops, underscored in an interview granted to the weekly magazine “La Settimana” that the strong points of the last synod of bishops were the doctrinal framework, the Gospel of the Family, and the push for young people to receive an education about love.

But these issues were included in the Synod’s final report only after the small groups (circuli minores) strongly criticized – and pushed for a substantial rewriting of – the Synod’s midterm report.

Cardinal Baldisseri’s words signalled that the Synod war has already begun, and that – in spite of the slogan “We don’t turn back” which accompanied the presentation of the next Synod’s guidelines – the majority of bishops does not endorse a pastoral practice that is completely detached from doctrine.

And Pope Francis would probably not support it either. The Pope is always very orthodox in his declarations. This fact has been demonstrated several times. The Pope backed the Slovakian bishops in their commitment to promote a referendum to defend the traditional family in their country. He invited Filipinos to be wary of the ideological colonization of the family. He expressed a strongly negative judgment over gender theory, which he also defined as ‘demonic’ during a meeting with Austrian bishop in an ad limina visit. Taken together these moments indicate that Pope Francis is anything but progressive.

So, who is the real Pope Francis? The one who supports liberal bishops and priests, or the one who speaks in an orthodox way? The answer may be more obvious than expected.

Simply put, for Pope Francis pastoral practice is more important than any given theological debate because the latter, in the end, may be no more than a worldly exercise. Perhaps his famous declaration about preferring a “poor Church for the poor” may also be read this way: a Church light in structure with limited philosophical debates and a great deal of pastoral love.

But this is not new. Benedict XVI spoke in almost the same terms about the need to escape worldliness and to move beyond the self-referentiality of ecclesial structures. And he underscored the value of mercy as is evidenced in the homily he delivered at the Mass for the inauguration of his petrine ministry. Time and again Pope Benedict preached about a Church that should not be constructed on ideas, but engaged in a lively evangelization effort.

Nevertheless, between these two popes a paradigm change is taking place. Pope Benedict was convinced that a solid theological background was needed so that the Church’s pastoral practice would be correct. In fact, the search for truth was pivotal in his pontificate. Pope Francis, on the other hand, sets aside any given theological problem in order to seek immediate, personal contact with people.

Bishop Eduardo Horacio Garcia, who was Cardinal Bergoglio’s auxiliary bishop in Buenos Aires,  recounted shortly after Pope Francis’ election that “at the end of the Jubilee Year, for which Cardinal Bergoglio had called a missionary year, we priests of the archdiocese asked Cardinal Bergoglio to call a synod in order to discuss how to harvest the fruits of our mission and draft guidelines. But he responded that a synod was good only for producing useless documents, while the only thing we need to do is to continue our missionary efforts and to remain in a state of permanent mission.”

These words perhaps explain better than anything else the inner sense of this pontificate. Pope Francis is putting everyone in a state of permanent synod in order to understand each bishop’s perspectives. But the direction of his reforms will proceed from a pastoral approach, and nothing else. Perhaps this is the real change of paradigm.

26 Responses to Pope Francis: Will It Really Be a Revolution?