Pope Francis: Expectations and Reality Pope Francis and the Culture of the Encounter

Pope Francis: will June be the turning point? 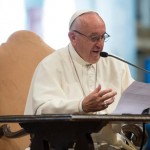 A series of clues points to June as a possible turning point in Pope Francis’s pontificate. After four years the Pope might finally give definitive shape to his Church, and this coming June might be the right month.

That the Pope wanted June to be a free month can be noticed by the fact that the trip to Egypt was – according to sources – initially scheduled June 11-12. Then suddenly, the Pope moved it up to April 28-29. He will leave right after the 18th meeting of the Council of Cardinals, scheduled for April 24-26, and before the trip to Fatima, scheduled for May 12-13.

During the year, the Pope will make other international trips: the trip to Colombia has already been made official, and will take place September 6-11. The Pope wants to go to South Sudan in an ecumenical trip with Anglican Archbishop of Canterbury, Justin Welby, and this trip might take place in mid-October, as requested by bishops (according to local sources, the first on site-inspections already took place, and the trip will likely take place October 15). In November, the Pope should go to India and Bangladesh, a “tour trip” the Pope already announced as imminent.

Usually, the Pope takes July as a vacation month, while in August there are normally some extemporaneous moves. So June is the month to keep under radar. It has been supposed that the Pope will make of June the month of a wide open consultation, eventually ending with a consistory.

After the April Council of Cardinals, another one will likely be scheduled for June, according to the regular rhythm of these meetings. It is possible that new dicasteries – for Integral Human Development and for Laity, Family and Life – will be finally shaped.

In particular, the dicastery for Integral Human Development already started a round of interviews with all the employees – the interviews were conducted by external experts, a man and a woman – in order to understand how to value each professional. It is rumored that about 20 interviews to appoint the Secretary of the new dicastery took place. The new Secretary might be a layperson. However, everything is yet to be decided.

The appointments of the new Archbishop of Milan and of the Pope’s new Vicar for the Diocese of Rome are also expected in June. After the Pope’s trip to Milan on March 25 – a trip the Pope had promised for a long time, and had once scheduled and then cancelled – the Pope will take his time to understand what profile of bishop he wants for Milan, a European city with a strong cultural aspect, even though Pope Francis emphasized its social and charitable character during the visit. Cardinal Scola, the current archbishop, has just turned 75, the retirement age.

Who could be the new Archbishop of Milan? Apparently, one of the names is Bishop Francesco Cavina of Carpi. Bishop Cavina was the bishop who, back in 2014, during a general assembly of the Italian Bishops Conference, expressed to the Pope all of his doubts and perplexities about some aspects of the pontificate. Perhaps in order to gain some more popularity, Pope Francis made the decision to visit the diocese of Carpi on April 2. The diocese was stricken by an earthquake in 2012, and the bishop inaugurated the rebuilt cathedral on March 25. With a career spent in the Secretariat of State, Bishop Cavina proved to be active on the international field over the last months, and had much exposure as a result of his frequent trips to Iraq.

There is another name circulating for Milan and – though it does not seem likely – and the fact that his name is circulating gives an idea of the situation within the Curia. The name is that of Cardinal Pietro Parolin, Vatican Secretary of State. Young – he is little more than 60 – a skilled diplomat who in his capacity of the first papal collaborator was able to make the Curia machine work, by asking the Pope for various documents and rescripts that ordered the “reforms in progress” which would inevitably become confusing. It is difficult to imagine that Pope Francis will deprive himself of such a skilled collaborator, but the rumors also pivot back to the precedent of Giovani Battista Montini, appointed Archbishop of Milan from his post at the top ranks of the Secretariat of State, and then elected Paul VI. In fact, Montini became Archbishop of Milan when he was not yet a Cardinal, and he was not the Secretary of State, but the Deputy.

In June, the Pope will also appoint the new Vicar for the Diocese of Rome. The appointment at first seemed to be all set to be announced on March 10. The new Vicar was rumored to be Archbishop Rino Fisichella, President of the Pontifical Council for the New Evangelization. In fact, on March 10 the Pope convened a meeting with the “prefect parishes,” subject to the deans or coordinators of smaller Roman areas. The Pope asked them to send him suggestions for the new Vicar by April 12. According to sources, he did not say what kind of suggestions he was expecting: whether names, or profiles, or just a note concerning the needs of Rome. He did not even formally extend the consultation to the laypeople of the diocese. One of the priests present asked whether laypeople could be asked for advice during this process. The Pope did not say no. The current Vicar, Cardinal Vallini, will gather the proposals and will give them to the Pope on April 13.

This procedure cannot be hailed as people’s participation in the choice of the Vicar for Rome. The Pope did not officially request that. In the end, the Pope will make his decision, keeping all the issues in mind, but without involving any further the people or the local bishops. It is even possible that Archbishop Fisichella will still be the new Vicar.

It is also rumored that the Vicariate of Rome will be reformed with a motu proprio that would cancel the role of the Vicar, entrusting the diocese’s government to two “vicegerenti” (deputies). This way, the Pope’s profile as “bishop of Rome” would be strengthened. The Pope would have no vicar, while the two vicegerenti will take care of the administrative and pastoral roles. Sources from the Vicariate do not exclude it. It is among the possibilities. But this does not mean it will be done.

The appointments of Rome and Milan can be contemporarily announced June 29, the Feast of Sts. Peter and Paul. That day is vacation day in the Vatican, and by tradition it is also a day for consistories. It is speculated that during those days the Pope might establish a round of meetings that would end with a consistory.

The process would start with the meetings of the Curial bodies – Pontifical Commission for the Protection of Minors, Council for the Economy, Council of Cardinals – and will end up with a consistory that will begin with the discussion on the path of reforms and will end with the creation of new cardinals.

The Pope might also decide to supersede the number of 120 voting electors fixed for the conclave by Paul VI, and he could do it formally with a motu proprio that raises to 150 the number of voting cardinals – a Cardinal can vote in a conclave until he is 80. Perhaps, the previous consistorial meeting will be focused on this, that is, an increasing the representation of the universal Church in the College of Cardinals.

If he really increases the number of Cardinal Electors, Pope Francis would have 30ish ‘Cardinal slots’”, and with these new red hats he would profoundly reshape the geography and orientation of the College of Cardinals. His picks would not be just for the present Church, but for the future Church as well.

During those days of meetings, there could be other moves. For example, the current vicegerente of Rome, Bishop Filippo Iannone, could be promoted to President of the Pontifical Council for Legislative Texts, in order to replace Cardinal Francesco Coccopalmerio, who passed the retirement age a couple of years ago.

During those days the Pope might also appoint the President of the Italian Bishops Conference (CEI). This appointment is rather important. Cardinal Angelo Bagnasco of Genoa ended his second 5-year term as President of the CEI. Pope Francis reconfirmed him until the May general assembly, during which, for the first time, the new procedures to elect the CEI President will come into force.

As the Pope is the Primate of Italy, the CEI does not elect its President or Secretary General: the Pope names them. Pope Francis wanted to change this, and asked the Italian bishops to establish a new regulation. After several discussions, the bishops decided that the Pope had to make the choice. They felt so connected to the Roman chair that they even discussed whether re-naming the President as “President Delegate,” underscoring that the real President of the CEI is the Pope. In the end, they compromised: the Italian bishops will vote during the general assembly, and the outcomes of the poll will lead to a set of three names (a terna) to be presented to the Pope. The Pope can decide whether to choose the new president out of the terna, or to make a completely different choice.

There are no candidates: all the residential bishops can be elected, while bishops with no diocese cannot be chosen – that means that the Vicar of Rome, the Pope’s deputy, cannot receive votes, and neither do the CEI’s general secretary. It is likely that the new President will be Cardinal Gualtiero Bassetti, though he is already 75. The Pope placed his trust in him; he appointed him a cardinal despite the fact that he leads the Diocese of Perugia (not a usual see for a cardinal), and the Cardinal met the Pope during the last week, on the eve of the meeting of the CEI’s Permanent Council – the periodic gathering of the presidents of commissions and regional bishops’ conferences.

All of this might happen in a June that the Pope has kept until now free from heavy commitments, with the exception of the ad limina visits of bishops from Panama and Haiti. At the end of that month, Pope Francis might give the universal Church a new geography and a new direction to the Church in Italy.