Pope Francis, will there be a meeting with Patriarch Kirill? 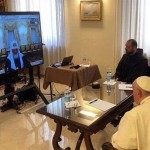 The conversation in video link between Pope Francis and the Patriarch of Moscow Kirill has reopened the debate on a possible second meeting between the Pope and the Patriarch of Moscow. Some speculate that the ongoing war in Ukraine has closed the possibility of a second meeting forever, considering that Patriarch Kirill has never condemned the Russian aggression but rather justified it in a letter to the World Council of Churches. Yet, the chances of a personal encounter between the two seem higher today than ever.

Then, after the March 16 conversation with Pope Francis, Patriarch Kirill had another video conference conversation with Justin Welby, primate of the Anglican Church. Presumably, there will be other meetings of this type.

In practice, Patriarch Kirill wants to break the isolation. However, his position on the war in Ukraine has marginalized him within orthodoxy itself because he is the only one not to condemn the war explicitly and not formally defend the Ukrainian state’s sovereignty.

This situation makes a meeting more likely. Popes have always make themselves readily available to meet with the Moscow Patriarchate. Before the meeting in Havana in 2016, all the attempts had failed not because of the Catholic side but of the Orthodox side. The iron will of the Orthodox side is a guarantee of success for the Orthodox.

The place where the meeting will eventually take place remains to be seen. There is more and more talk of Jerusalem, where the Pope could stop on the way to a visit to Lebanon that he would like to make during the year. Even if it is not Jerusalem, it will not be a place in Europe either because Europe is a battleground and could not function at a symbolic level.

What was striking was how Moscow and the Holy See communicated about the videoconference between the Pope and Kirill.

The Holy See responded not with a bulletin, but with a statement by the director of the Holy See Press Office Matteo Bruni, who explained that “the conversation had at its center the war in Ukraine and the role of Christians and their pastors in doing everything to ensure that peace prevails. ”

Bruni added that “Pope Francis thanked the Patriarch for this meeting, motivated by the desire to point to, as shepherds of their people, a path to peace, to pray for the gift of peace, so that the fighting may cease.”

Again according to the statement, the Pope and the Patriarch would have agreed that the Church “must not use the language of politics, but the language of Jesus.” At the same time, both “underlined the importance of the negotiation process.”

Again, the Pope would have said that “as pastors, we must stay close to and help all the people who suffer from war. Once upon a time, there was talk in our Churches of holy war or just war. Today we cannot speak like that. The Christian awareness of the importance of peace has developed”.

The communication service of the Patriarch of Moscow, on the other hand, was more dry and institutional. Its statement explained that “a detailed discussion of the situation on Ukrainian soil took place” and that “Particular attention was paid to the humanitarian aspects of the current crisis and the actions of the Russian Orthodox Church and the Roman Catholic Church to overcome its consequences.”

Furthermore, the statement from the Moscow Patriarchate continued, “the parties underlined the exceptional importance of the ongoing negotiation process, expressing their hope for a just peace to be reached as soon as possible.”

The Holy See’s communiqué speaks of the fact that there is no just war, while the Moscow Patriarchate only refers to a “just peace,” which can also mean a peace respecting the conditions set by Russian President Putin.

In particular, the Holy See points out that the Pope said that the Church “must not use the language of politics, but the language of Jesus,” a detail not present in the Patriarchate’s communiqué.

Furthermore, the statement of the Moscow Patriarchate was published shortly after the meeting, that of the Holy See only in the evening, many hours later.

These are essential details. Because Pope Francis cannot fully agree with Kirill’s position, he informally expresses himself, using a quotation mark instead of an official statement, placing himself as a guarantee of the dialogue and the relationship set up with Kirill.

There is, again, this lack of institutionality that characterizes the actions of the Pope, with which he tries to circumvent obstacles. Will this informal way of doing diplomacy achieve the goal? Will he be able to give a signal to Russia before a meeting that seems imminent?

The risk is that of a new joint declaration more influenced by the Russian perspective than by that of the Holy See, and therefore unbalanced in the context of ecumenical dialogue. The Pope would be willing to do anything to go to Moscow. For this reason, the conversations, even when they had political tones, have always been characterized by a solid pastoral commitment from the Pope. Being pastoral, however, does not solve diplomatic problems. Indeed, it risks creating them.

7 Responses to Pope Francis, will there be a meeting with Patriarch Kirill?