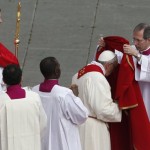 With the appointments of the new archbishops of Paris and Mexico City, Pope Francis has once more shown his ecclesial “realpolitik”. In general, he prefers to choose bishops with a pastoral profile, not cultural warriors. However, these two latest choices show contrasting signals.

Michel Aupetit, the new Archbishop of Paris, replaces Cardinal André Vingt-Trois, who served for years as archbishop of the capital of France. A late vocation – he worked earlier in life as family doctor – Archbishop Aupetit possesses a high pastoral profile, but he also has strong skills in bioethics. These skills are crucial in the context of the secularized debate in France, where Catholics are back to showing their collective weight in politics. The new Archbishop of Paris will also be called to lead his brother priests and bishops within a movement of secularization that exploded in several episodes of religious intolerance in various region of France, climaxing in the martyrdom of Fr. Jacques Hamel, actually killed my Islamists, but in fact being a victim of the indifference about all of these episodes of anti-Catholic intolerance.

On the other hand, Cardinal Carlos Aguiar Retes, appointed by Pope Francis to replace Cardinal Norberto Rivera Carrera at the helm of the Mexico City Archdiocese, has a completely different profile. He is considered a man of dialogue, less tough than Cardinal Rivera Carrera and, above all, less conservative. In South America, Aguiar Retes is described as a priest having great pastoral skills who does not stand rigidly behind doctrinal positions, and who has developed a good ability to govern as president of the Mexican Bishops Conference and of the Latin American Bishops Conference.

In the end, Cardinal Aguiar Retes meets more of the requirements of the shepherd according to Pope Francis than Archbishop Aupetit. But is there any criterion for understanding Pope Francis’s appointments?

If so, the criterion is probably pragmatic, as is the case with most of this Pope’s choices. Beyond the way he wants to shape the Church, Pope Francis tends to be really pragmatic when he picks bishops for key posts all over the world.

He acted pragmatically when he had to choose the successor of the beloved Cardinal Joachim Meisner in Cologne. He appointed Cardinal Rainer Maria Woelki, who went back to his home diocese thanks to an appointment that seemed more tailored to Pope Benedict XVI’s style.

It also happened in a certain way when the Pope appointed Cardinal Carlos Osoro Sierra as Archbishop of Madrid. His profile is sharply different from that of his predecessor, Cardinal Rouco Varela, but he was already appreciated by Pope Benedict, under whom his career advanced, so his promotion under the current Pope cannot be considered simply a “Franciscan” choice.

The same thing is happening with the choice of Cardinal Vingt-Trois’ successor as archbishop of Paris.

Pope Francis’s appointments of bishops in Italy follow a more nuanced criterion: on the one hand, the Pope wants to appoint shepherds himself, on the other hand, he aims at giving less importance to the Italian reality, or at least less than before.

This is the reason that both the new Archbishop of Milan and the Vicar of Rome, respectively, Archbishops Mario Delpini and Angelo De Donatis, have been chosen from among the auxiliary bishops of the two most important dioceses of Italy.

In terms of the United States, the Pope seems to be willing to oppose in strong terms the general trend, and this was the case with the appointment of Blase Cupich as Archbishop of Chicago and of the creation as Cardinal of Joseph Tobin, who was then transferred from his post as Archbishop of Indianapolis to Newark. Both Tobin’s and Cupich’s profiles differ a great deal from the general sentiment of the US Bishops Conference.

Pope Francis’s realpolitik can also be observed in “internal” choices, that is, in the appointments in the Vatican. The possible replacement of Msgr. Guido Marini as Master of the Pontifical Ceremonies has been strongly rumored. The Pope met his Master of Ceremonies for a private audience at the end of the latter’s second term in the post. However, Msgr. Marini is still there, and he will probably keep the post for five more years, all other things being equal. Msgr. Marini has already travelled to Chile and Peru to organize the upcoming papal trips there.

Marini was not re-confirmed because he is in line with the Pope Francis’s thought, but because of his ability to take a balanced approach to the Pope, remaining faithful to the institution with great intellectual honesty. Pope Francis appreciates this.

Even Cardinal Robert Sarah has kept his post as Prefect of the Congregation for Divine Worship and the Discipline of Sacraments despite the Pope’s having publicly blamed him for too restrictive an interpretation of the motu proprio “Magnum Principium” which has now liberalized the translation of the Roman Missal from Latin into vernacular languages.

On the other hand, Cardinal Gerhard Ludwig Mueller was not re-confirmed as Prefect of the Congregation for the Doctrine of the Faith, in spite of the fact that he never publicly criticized Pope Francis on doctrinal issues. Cardinal Mueller did not, however, fail to express his disappointment with the Pope over some other issues.

In the end, we cannot identify a fixed rationale for papal appointments on the basis of a strong ideological basis. Instead, the Pope takes a very pragmatic approach. On the one hand, he aims at opening processes, without closing any of them. On the other hand, he tries to make his decisions while keeping an eye on the concrete situation and at the same time on the willingness of those chosen to carry out his agenda.

It is yet to be made clear what the Pope’s next moves will be. There will be soon a new Archbishop of Durban, South Africa, to replace Cardinal Wilfrid Napier who has already turned 75. Cardinal Napier is considered among the most conservative African bishops. However, the Pope holds him in great esteem, and he appointed him a member of the Council for the Economy. The nomination of his successor will tell us something more about Pope Francis’s approach. Equally revealing will be the possible reshuffles within the ranks of the Roman Curia.

In the end, this pontificate resists interpretation, as there are no seemingly fixed criteria. There is just one clear idea: that of undertaking a pastoral revolution, which will necessarily involve doctrine, although only indirectly. The Pope knows that he is the lone man in command to carry out this revolution.