Seminaries: Key To The Next Conclave 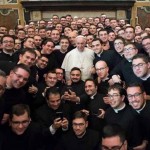 What will be the leading themes of the next Conclave? This question has been circulating for some time in Rome, and it does not come from an alleged wish to get rid of Pope Francis, nor from the improbable possibility that the Pope would resign or even die. The question is circulating because, after three and a half years of this pontificate, and with the Pope about to turn 80, it is time for taking stock. What has changed under Pope Francis’s pontificate? And what will the next steps be?

For this reason, the pre-conclave meetings that led to his election are being analyzed, while rumors are circulating about the Cardinals’ moves and expectations for the next Pope. At the same time, there is a need to understand what the Church needs, and what is the natural continuation of a Church that is “outward bound” and heading “toward peripheries,” two themes that characterize Francis’s pontificate along with the agenda of mercy. All of those involved in these conversations give a unanimous response: the next election will be about the seminaries.

This response seems paradoxical, since one of Pope Benedict XVI’s first decisions, back in 2005, was an instruction about admission to seminaries. The instruction was openly attacked, and now it is cited and confirmed in a text signed by Cardinal Beniamino Stella, Prefect of the Congregation for the Clergy, and very close to Pope Francis.

The text is titled “The Gift of the Priestly Vocation.” It is an important text, but it was not officially presented. It was released on December 8 in L’Osservatore Romano, and immediately grabbed headlines because it confirmed that homosexuals, people with homosexual tendencies and those promoting the gay culture cannot become priests.

Beyond that, the 92 page-long document deals with many other issues. It establishes a “curriculum studiorum” that confirms the old program of studies, but still needed to be restated because the competence for seminaries passed in 2012 from the Congregation for Catholic Education to the Congregation for the Clergy. The document also outlines the profile of the future priest: he must be educated, with administrative competence and knowledge of canon law. He must be able to be close to the people, delivering simple and short homilies. Future priests are also expected to be able to evangelize, to go out toward the peripheries, to non-believers.

The text is also imbued with something of the “spirit of Pope Francis.” However, the evocation of this spirit is limited to the call for a formation aimed at “integral human ecology,” of “priests with the smell of the sheep,” and for the prevention of clergy sex abuse – a requirement that was already in documents since – under Pope Benedict XVI – the Pontifical Gregorian University organized a conference on “Toward Healing and Renewal,” that acted as a launching pad for the Pontifical Commission for the Protection of Minors, established by Pope Francis.

Themes within the document are not new, though it is noteworthy that they have been reaffrimed under Pope Francis. His pontificate was labeled by many as “revolutionary,” as if the word itself were able to characterize the pontificate. However, Vatican internal reforming processes, the long-term ones, are still carried on in the usual way, with no jolts. This is also because Pope Francis cares most about pastoral practice, while cultural formation is still solidly traditional. In fact, the recently issued document also mentions the importance of pastoral theology. But this is a discipline that was born in Germany back in 18th century, and has theological content. Pastoral theology holds that the term “pastoral” does not refer to a praxis unfettered from doctrine, as the Synod 2015 working document apparently insisted it should be, and as those who claim to interpret Pope Francis’s words and actions also want to insist.

The future of the Church is being played out in the field of priestly formation. Vocations, the way that local bishops will manage them, the education of priests and the way this education influences their work with the flock will all be crucial. But also crucial will be the number of seminarians in the future, as proof of how many vocations the new emphasis on pastoral care is able to produce.

This hot button issue has developed over the course of years. Despite Pope Francis’s popularity, the number of priests keeps on dropping. And the fact that Wikipedia dedicates an entire page to the shortage of Catholic priests suggests that the problem is still current.

Some examples. In Italy, the solid Catholic tradition still holds, but the decrease in seminarians is proven and certain. As of December 31, 2014, there were 2,753 seminarians in Italy, which meant a decrease of 12 percent from the previous year. In addition, there are 40 seminarians who leave the seminary each year. Germany, a country that traditionally sent missionaries to foreign countries, now can count on the assistance of immigrants priests who are 10 percent of the country’s total.

The US is also witnessing a decline in the number of priests as of 2012 (- 4.3 percent). Some published researches try to insist that one of the reasons for the decline of vocations is the requirement of poverty and celibacy. However, this is a short-sighted view. The earlier US data for 2012 are more encouraging. Back then there were 3,608 seminarians, 125 more than in 2011. 2012 witnessed the largest number of seminarians in the US since the 90s.

The data are worrying. Although they should be analyzed step-by-step over time in order to arrive at the deep causes behind them, at first glance, we might say that the inversion of a tide in the US is a signal that should not be underestimated. From the 80s on, the composition of US bishops has been profoundly modified. St. John Paul II’s appointments were “conservative” – according to the way bishops are labelled in the US – and anchored to Catholic values. Bishops were ready to take their place in the public square. These bishops created a “school” of sorts, and this school is still the most important one in the States. Seminaries benefited from it, and the figures show this. At the same time, the figures show a decrease in seminarians in those dioceses where the bishop reflected the attitudes of the secular world. A classic example provided is that of the Diocese of Spokane, whose seminary lost a lot of seminarians under Blase Cupich. Pope Francis later appointed Cupich Archbishop of Chicago and created him a Cardinal during the last consistory.

All of these data provide food for thought, and they are crucial when talking about the future Church. This is the reason why the discussion about a future conclave is already underway. Pope Benedict XVI’s unexpected resignation somehow froze the discussion on vocations. Cardinals, who were not ready and were probably angry over management problems in the Vatican, focused all the pre-conclave discussions on pragmatic issues. A change of narrative seemed to be necessary, and Pope Francis guaranteed it, along with the subsequent promise to make the structural reforms (i.e., curial reform) deemed unavoidable.

Since the very first Mass with Cardinals in the Sistine Chapel, and then in the Apostolic Exhortation “Evangelii Gaudium,” Pope Francis put forward his idea of the priest – a priest “with the smell of the sheep”, part of a Church walking and dialoguing with the world. The same Pope Francis made of the formula “realities are greater than ideas” one of the pillars of his thought, thus discouraging bishops from carrying on any debates over Christian ideals and values in the public sphere, as though the Church had lost the cultural wars, and even the struggle for catechesis, and now just needed to accept the reality of things the way they are.

But this is not actually the point. The real point is that the Church is looking for the profile of the next Pope with the goal set on increasing vocations to the priesthood, rather than on a change of narrative, as happened last time. This is a decisive change of paradigm. After the pontificate of Benedict XVI, the primary goal was to generate a consensus and even to generate revenues – and this was one of the goals of the economic reform – now there is the need for a Church with enough strength to fulfill its mission to the world. A Church able to pray – last polls in Germany show that not even the priests pray – and to feed the flock with the Eucharist and with clarity of faith, instead of a Church committed to pastoral plans.

In the end, all of these criteria can be found in the new Archbishop of Krakow, Marek Jedraszewki, whom Pope Francis appointed on December 8 to be Karol Wojtyla’s third successor in Krakow. The new Archbishop’s profile does not seem to fit with the profile of bishops that Pope Francis usually favors – and in fact, he was not even considered a candidate for the post. In Lodz, where he spent the last years as Archbishop, he lived in a particularly difficult environment, insasmuch as the city was dominated by post-communists and socialists. Despite that, he was able to refound the Catholic environment by staying close to doctrine and by being outspoken in criticizing gay culture and defending the family. He is no showman, he has a calm temperament and projects clear values – say observers from Poland.

Is Jededraszeski’s appointment the first outcome of the renewed need for priests that can be glimpsed as a theme in the new document on seminaries? It is too early to say. However, it is noteworthy that the document de facto confirms the criteria of admission to seminaries as they were established over the course of the years, with no particular adjustments. The work already done in the past is thus acknowledged. Moreover, the document emphasizes that this work done must be carried on until the end. Revolutions were expected. Confirmations came instead.