A letter by Benedict XVI helps to understand the difficulties of Pope Francis’ synod Pope Francis, the era of division

Synod 2018, will the Synod fathers be able to place the Eucharist at the center? 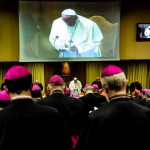 This underestimating of the Eucharist was noted by many of the Synod fathers. It was Archbishop Tadeusz Kondrusiewicz of Minsk, however, to call attention to the issue in a clear intervention during the Synod of bishops.

It is not by chance Archbishop Kondrusiewicz spoke up. He became a priest in Soviet times, he endured the years of the persecution of Catholics, and he was also the first bishop at the Mother of God in Moscow when, after the collapse of the Soviet empire, the Catholic hierarchy was re-established.

He, in the end, is part of Eastern Europe, where faith was kept alive because it was transmitted by grandparents in times of persecutions, while it was being erased, attacked and marginalized by State atheism. As all the bishops coming from Eastern Europe, Archbishop Kondrusiewicz knows what it really means to live where faith is marginalized and fought.

The antidote to Soviet repression lied in the Eucharist, and in the strong desire for the Sunday Mass that was above everything. There was the awareness that there is no Church with no Eucharist, and that out of the Eucharist come not only faith, but also doctrine, and both moral and social teaching.

In his intervention, Archbishop Kondrusiewicz noted that Belorussian youth followed the Pope during his recent trip to the Baltic States. However, youth massively opted to go to Kaunas rather than Vilnius, where there was a meeting with them. The reason being that they wanted to take part in a Mass.

In another intervention, Archbishop Kondrusiewicz noted that, toward the end of the Soviet Union era, young students of history, tired of a Communism that did not deliver on promises of heaven on earth, entered into a sacristy asking to be taught the Gospel, the only book that has always stayed the same.

That this kind of testimonies come from Eastern Europe is natural. They show, as already happened during the two Synods on the family, that the real hope for the future of the Church lies in the peripheries.

At the Synods on the family, bishops from Eastern Europe, along with those from Africa, opposed any watering down of doctrine, and asked that the Synod’s documents be not detached from Christian teaching. These bishops were not against the idea of a pastoral accompaniment. They were rather in favor of a clear faith, because only with a clear faith was evangelization possible.

Likewise, during this Synod Bishops from Eastern Europe and from Africa defended the natural family. Accompanying young people, it was said during the discussion, implies the need to understand to which kind of family youth belong, and so eventually to accept as family those formed by same-sex couples or extended families.

According to bishops of Anglo-Saxon countries, of Germany, and in general from Western Europe, the Church needs to recognize non-traditional families at least for legal reasons. The state was recognizing these new families, and so the Church should follow that rationale to remain consistent with the state system.

African and Eastern European bishops rejected the idea and underscored that the Church cannot be tied to what the state does, nor to public opinion, but should rather hold firm to her teachings.

The issue raised by bishops from the Western world was in fact reduced to a single area, relations between Church and State, and did not go beyond the working document.

According to other bishops, the Synod’s working document is a “great pastoral document” with low impact on faith.

In fact, this discussion is one prove that the lack of faith is really the crucial issue. Archbishop Charles J. Chaput of Philadelphia raised the matter before the Synod, and then the issue was raised in many of the discussions. Bishops noted that there is a lot of talk about accompaniment and best practices for specific situations, while the Eucharist and Sacraments are barely topics of discussion.

Even after the Second Vatican Council, pragmatic issues and details became the center of everything. New sociological discourses were created, betraying, in the end, the theological approach. If the Second Vatican Council took place to read the signs of the times under the light of faith, the discussion that followed focused on the signs of the times, without talking about faith.

This led to polarized positions. Traditionalists identified the original sin of this lack of faith in the new liturgy, and in the opening on religious freedom, or even in a mistaken notion of sin. The others reflected about how to project the Church in the world, leaving aside the announcement of the Gospel.

This discussion involved everyone: ecclesial movements, born after the Second Vatican Council, that showed different approaches to different situations; the laity, who sought to be involved to the point that they considered the Church as theirs (and they still do); priests, who were called to preach the faith, while the faith seemed to have become a secondary issue.

These positions are still current today. While this discussion was ongoing, in Eastern Europe, in Soviet territories, but also in other post-Communist places like China, Vietnam and Laos, the Church endured an unprecedented persecution, and people tried their best to stay connected to the Eucharist.

The Eucharist was the center of life for Cardinal Van Thuan, imprisoned in Vietnam; for Archbishop Sigitas Tamkevicius, who lived many years in captivity in Vilnius and was then deported to Siberia – Pope Francis met him in Lithuania.

The list is even longer. Not by chance, all of those who endured persecution and remained faithful to the Eucharist criticized the Vatican Ostpolitik in the 1970s and now they criticize the agreement with China on bishops’ appointments: if faith accepts no compromises, why should the Holy See?

Obviously, the Holy See diplomacy is on a different level, and diplomacy is in the end needed to live the faith in freedom. But the issue is crucial, although also this discussion on diplomacy and religion is often polarized.

But many of these discussions are based on details, like the social impact of the Church and liturgy. When there are more urgent matters, details matter less. Those who really want to live the faith, look for the essential, and reach out for the Eucharist. That is the issue.

Now, we have come about to a Church that, detached from the Eucharist, becomes disincarnate, and thus Churchmen, detached from reality, are not able to read the signs of the times.

There was the need, in the end, for post-Soviet Churches to shed light on this issue to understand what is at stake.

Now, it is yet to be seen how the discussion will develop. Not on the table is the Humanae Vitae issue, at least for now – documents showed that St. Paul VI did not act alone, and listened to many people. The issue of marriage will become one of the central topics.

Just as the issue of conscience was used during the 2015 Synod to pave the way to the discernment topic, that seemed to open communion for Catholics divorced and remarried; so may the issue of accompaniment be used to have a Church open to receive input from the world, rather than providing it inputs and teaching.

It remains to be seen if the Synod fathers will amend the working documents and if the Pope will draft a post-Synod exhortation. Certainly, the majority of the fathers want the Pope to have the final say, without definitely accepting the conclusions of the Synod. Will the Pope decide to have an ever-open Synod, as happened with Amoris Laetitia?

This is the unanswered question, pending for the last week of discussions. As it is pending the question of whether sacraments will get new space. In the end, this is what Synod fathers are asking for.