Pope Francis: What is his Pontificate’s Upcoming Agenda? Pope Francis: A Red Line between the US Trip and the Synod 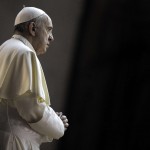 There is one word that will be pivotal at the upcoming Synod for bishops: conscience. The arguments of those who want to adapt doctrine to pastoral practice will probably be based on conscience. In this way the main topics of discussion will be switched around from guaranteeing access to sacramental Communion for the divorced and civilly remarried, and the pastoral care of homosexual couples, to the question of personal conscience.

This switch was probably predictable. Many fought during and after the 2014 Synod, pushing for substantial doctrinal change on issues like contraception, same-sex marriage, and Communion for the divorced and remarried. Step by step these individuals switched their position and increasingly thought about the primacy of conscience as an argument justifying the possibility of access to sacramental Communion for almost everyone. Confession was the main issue absent at the 2014 Synod, but it was extremely in vogue during the “Shadow Synod” that took place in Rome on May 25, 2015. During that meeting a “narrative theology” was proposed according to which each individual’s personal story takes precedence over sacramental discipline, and every personal story must be discussed with one’s confessor.

This long awaited reform was announced on September 8. It was considered a need. The last reform can be traced back to the 18th century, when Pope Benedict XIV introduced the requirement of a double conforming sentence prior to the granting of a declaration of nullity (that is, an initial affirmative sentence was to be automatically appealed to a court of second instance, and a second affirmative sentence had to be issued in order for the declaration of nullity to be granted). This is the procedure that was followed until now. However, many were convinced that the requirement of double conforming sentence produced delays and confusion, and needed to be eliminated.

Certainly, streamlining the procedures was not supposed to result in a diminishment of their seriousness. It was commonly agreed that the double conforming sentence had to be abolished, but it was also generally emphasized that the first sentence had to be the most accurate possible. In the end, popes always warn against too easy a concession of a declaration of nullity.

John Paul II, the “Pope of the Family,” asked judges many times to be more careful when granting declarations of nullity. Benedict XVI made the same demand. And even Pope Francis has done likewise. Meeting on November 8 with members of the Supreme Tribunal of the Apostolic Signatura, Pope Francis praised the “defender of the bond,” whose function it is in every case to argue for an outcome “in favor matrimonii” (against a declaration of nullity and for the recognition of a valid marriage).

The goal of the current reform is that of streamlining procedures. The double conforming sentence is abolished, as predicted. And every bishop is granted juridical power. Every bishop is a judge so he can have recourse to one of the many interdiocesan tribunal or establish a diocesan tribunal.

The power of the bishop is even stronger when he is called upon to decide whether a declaration of nullity should be granted through a regular or an abbreviated procedure. The abbreviated procedure may also be employed in the case of a lack of faith on the part of one of spouses at the time of marriage, even if the spouse was baptized.

The issue of a lack of faith in marriage has been widely discussed, being the object of a never-ending dispute between canon law experts and theologians. The latter support it, while those canonists who do not deny that a marriage could be declared null in the case of a lack of faith, note that this lack can hardly ever be proven.

Benedict XVI addressed the issue in a 1998 essay, republished by “L’Osservatore Romano” on November 30, 2011. This essay is now the tool used by the adapters to support the abbreviated procedure in the case of a lack of faith. However, the adapters do not mention that although Benedict had asked for a streamlined procedure for declaration of nullity, and also thought about the possibility that lack of faith could be grounds for nullity in specific cases, he never suggested it as a possible justification for an abbreviated procedure.

The number of specific cases is now a lot higher, as pointed out by a September 9 article in “L’Osservatore Romano” by Msgr. Pio Vito Pinto, Dean of the Rota and President of the Commission of Study for the Reform of the Canonical Matrimonial Process. Msgr. Pinto wrote that it is now time to move “from the restricted number of a few thousand declarations of nullity to the countless number of unhappy people who might get the declaration of nullity because of an evident lack of faith,” and are “left outside the current legal system.”

Msgr. Pinto himself used Benedict XVI’s 1998 essay as an example, and paved the way to the possible exploitation of the notion of conscience at the upcoming Synod.

In the 1998 essay, Benedict opened the possibility of access to sacramental Communion for the divorced and civilly remarried via the “internal forum.” By that he meant that those who were not granted a declaration of nullity because of a lack of sufficient evidence in their favor, but were convinced that the sentence was wrong, could receive Communion on the basis of the internal forum, that is on the basis of their personal consciences. This private decision could be made in accordance with the counsel of one’s confessor.

The adapters are looking at this part of the essay in view of the upcoming synod on the family. It is probably their last chance. From a pastoral point of view, there are no arguments left: sacramental Communion for the divorced and remarried cannot be conceded simply on the basis of “pastoral solicitude,” and most of the bishops agree on this point. There is a third path, a pastoral approach which does not affect doctrine, and 11 cardinals have backed it in a book to be published September 25, a book that will not go unnoticed.

As far as the discipline of sacraments is concerned, the majority of bishops appointed or elected to the synod by the bishops’ conferences stand on the side of the current doctrine, even though they too wish for pastoral care that responds more to current situations, but without sacrificing anything of the Gospel message. A rumor has been circulating that this is not Pope Francis’ view; that he is closer to the adapters as will be demonstrated by his personal appointments to the synod. The papal appointments, together with the full list of other participants to the synod, will be made public only on or around September 15. The Pope’s personal appointees will certainly represent the his preferences, but they will also be called to enter into communion with the majority of the synod’s assembly.

The Pope’s particular outlook, however, cannot be easily deduced simply from his appointments. He seeks to create a mixed assembly in the synod, with the final goal of “hacer lio,” creating commotion.

The adapters have no grounds from a pastoral and a sacramental point of view, but there is a path open to them in terms of personal conscience. On the one hand, relying on personal conscience as a solution leaves everything in the confessor’s hands, but on the other hand it leaves the faithful without clear indications. Everyone can appeal to his personal conscience in the end. Some of the divorced and remarried, relying on their consciences, will probably decide not to receive Communion, or not to enter into new conjugal relations. Others will simply take Communion.

This is how the new procedures concerning the declaration of nullity will affect the synod, thus moving the core of the discussion elsewhere. The discussion might also be manipulated, as the synod’s three scheduled weeks will be managed in a different way than in the past. Each week will be dedicated to the discussion of one of the three parts of the synod’s “Instrumentum Laboris”. After an introduction, the Synod Fathers will be divided into small groups, and at the end there will be a final summary of the small group discussions that will not be released. There will be no mid-term report. At the end of the three weeks, there will be a sort of “synod report” that will be capped with a final address by Pope Francis.

There will be no post-synodal apostolic exhortation, a decision intended to demonstrate that every discussion will be left open. The doctrinal revolution will thus not be achieved through precise documents, but through the exploitation of every vague expression that comes out of the synod. Considering that each bishop has only 3 minutes to speak, and that discussions in small groups result in a final summary statement, we can assume that there will be vague affirmations.

Even Pope Francis’ attempt to keep the issue of annulments off of the synod’s agenda failed. The Pope established the commission August 27, before the 2014 Synod, and the Commission’s work ended in only in July.

During the last synod, an attempt was made to lead the commission to certain conclusions. One of the proposals was to allow declarations of nullity for lack of faith to be issued via a simple administrative procedure, as happens with a marriage “ratum et non consummatum” (ratified but not consummated).

When a marriage is ratified but not consummated, the Rota can dispense from the bond: it is an administrative procedure used in very few cases. Cardinal Francesco Coccopalmerio, President of the Pontifical Council for Legislative Texts and member of the commission, made the proposal of an administrative procedure for declarations of nullity during the 2014 Synod, and presented it on October 9, 2014 during a media briefing. As he explained his proposal, if two people have no faith and they have but one witness to their lack of faith, albeit a secure witness, then even in the absence of any corroborating evidence, a dispensation from the marriage by means of “an administrative procedure” could be allowed. The commission did not back this proposal, because the members wanted to protect the principle of the indissolubility of marriage.

The final text of the reform legislation seems more like a moratorium than a law with a long term view. It seems mostly dictated by the urgency to resolve some concrete problems – the lack of tribunals, the length of time required for the process – rather than by the need to create a long term and functional juridical system.

This is the problem with the Church conceived as a field hospital. There is an agenda at work behind Pope Francis’ back, and it must be said, too, that there is an attempt to water down the theology of marriage and family through the agenda of mercy. Pope Francis has always endorsed the current theology of marriage. Last week he asked once more that the family be defended from ideological colonization.

By underscoring an “ideological colonization,” he mostly refers to pressures coming from the secular world. In fact, there is also an ideological colonization that originates inside the Church. The promoters of this colonization have exploited Benedict XVI’s thought for the purposes of their agenda. They have rediscovered some of the ever- present – but always overshadowed – topics of Benedict’s pontificate, such as mercy, humility and joy. But they manipulate these topics, thus obfuscating the Pope Emeritus’ pontificate and over-interpreting the current pontificate. Pope Francis should watch out for these enemies, too.