By Andrea Gagliarducci On 8 settembre 2013 · 2 Comments · In Vatican 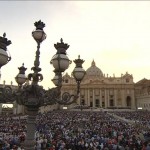 The one-and-a-half hour Eucharistic adoration that concluded the vigil of the prayer for peace, which the Pope called for September 7, will be remembered as one of the most impressive and intense moments of Francis’ pontificate. The words Pope Francis addressed to the crowd have stirred the world’s conscience. And yes, the vigil – which was held around the world, in different ways and shapes – achieved Pope Francis’ main goal: to stir consciences. At the same time, there has been an intense diplomatic effort by the Holy See to protect communities and to rescue people in Syria. This diplomatic activity reached a peak with the meeting Msgr. Dominique Mamberti, Vatican Secretary for Relations with States, had with the ambassadors accredited to the Holy See.

The meeting took place Thursday September 5, in the New Synod Hall. As Mamberti was explaining to ambassadors the position of the Holy See, the letter that the Pope sent to the presidency of the G20 was made public. The letter explicitly mentions the Syrian crisis. The many tweets posted by the Pope’s official account @pontifex show that Pope Francis really wanted to be heard.

It was even rumored that Pope Francis had made a phone call to Syrian President Bashir Assad, in what would have been a display of a Bergoglio-style informal diplomacy. The Pope had Father Federico Lombardi, the Director of the Holy See Press Office, dispel this false rumor. That there was no such a call is hardly surprisingly, as there is little to be “informal” about when people are dying.

That there is not much leeway for informal diplomacy is well-known at the Vatican Secretariat of State. For two years now, Vatican officials have never stopped listening to the the cry of the Syrian people, and have continued to advocate for a peace that would preserve Syria’s territorial integrity, facilitate reconciliation among different religious groups, and ensure religious freedom.  This would be the way to end a seemingly never-ending war.

While the «western world» was silent about what was going on in Syria, Francis Chullikat, papal nuncio to the United Nations in New York, and Silvano Maria Tomasi, papal nuncio to the United Nations office in Geneva, denounced the dramatic situation in Syria and tried to focus the attention of the world on it. While the western world decided to lift the general arms embargo for Syria (to allow support for the armed rebels), the Holy See took the floor to reaffirm that more weapons would not resolve the conflict in Syria.  The Holy See was one of the very few voices in the international arena speaking in favor of a continuation of the arms embargo.

The Church’s engagement in the region is enormous. Caritas in Jordan has helped 1.3 million refugees from Syria, and bishops are doing what they can to maintain the cohesiveness of a Christian community evermore at risk. The use of chemical weapons and its consequences may overwhelm all these efforts.

«We cannot remain silent, in the face of these facts,» Mamberti asserted to the ambassadors accredited to the Holy See. And he then explained: «Since the beginning of the conflict, the Holy See has been sensitive to the cry for help coming from the Syrian people, in particular from Christians, and it immediately declared her position, which corresponds to the affirmation of the centrality of the human person.»

In the New Synod Hall, Mamberti reminded his audience about the efforts to pursue peace in Syria that the Holy See has engaged on, going back to Benedict XVI’s pontificate. They include the trip to Syria of a delegation from the October, 2012 synod of bishops.

Mamberti also underlined that the priority is «to stop the violence that keeps disseminating death and destruction and that risks drawing in not only the other countries of the region, but also to have unforeseeable consequences in several parts of the world.»

Mamberti, who is the Vatican’s equivalent to a minister for foreign affairs, also underlined «the need and urgency to respect humanitarian law and ensure humanitarian assistance for the refugees».

A resolution to the conflict can be reached through three general principles, according to the Holy See: the restoration of the dialogue among the parties and reconciliation among all the Syrian people; maintaining the unity of the country, avoiding the establishment of different ethnic enclaves for the different components of society; and, lastly, maintaining the territorial integrity of the country.

Mamberti also noted the need for true religious freedom, the right of all rights.

The ambassadors listened to him, made questions, and took part in the discussion. The representatives of the United States (whose new ambassador to the Holy See has not still presented the credential letters to the Pope) and France, the two countries that support launching a military action in Syria, were also at the meeting. Some of the ambassadors asked how to take part in the September 7 prayer and fasting.

At the vigil, there were several ambassadors praying for peace in a world which fate is to some degree decided in the G20 meetings, the gathering of the world’s most industrialized countries. As is customary, Pope Francis sent a message to the rotating presidency of the G20, currently Russia. Thus, the Pope’s letter was addressed to president Vladimir Putin.

The letter is structured in two parts.  The first one is largely educational, with the Pope appealing for a «world financial framework of fair and clear rules, to achieve a more just and caring world,» in which «it is possible to beat hunger, offer everyone a decent job, adequate shelter, and needed healthcare.»

At the end of this section, there is a sort of link to the situation in Syria, when the Pope asserts that «armed conflicts always constitute the deliberate negation to any possible national harmony,» and that wars «are in effect a refusal to undertake the efforts required to achieve major economic and social goals,» like the Millennium Development Goals.

The Pope agrees that meetings of the G20 heads of state are about the world economy, and not international security. At the same time, the heads of state – Pope Francis notes – should not avoid «reflecting on the situation in the Middle East, and in Syria in particular,» because «too many vested interests have prevailed since the Syrian conflict began, thus preventing finding a solution that would have averted the senseless massacre we are witnessing.» The Pope adds: «May the G20 leaders not be indifferent to the tragic situation which, already for too long, the Syrian people have been enduring.» A tragedy– the Pope concludes – which «threatens to bring about more suffering to a region so often traumatized and so much in need of peace.»