That diplomatic legacy of Benedict XVI that has been forgotten 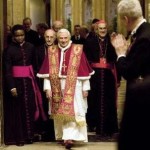 That of Benedict XVI was a diplomacy founded on truth, which reasoned on principles, and which had as its ultimate goal not only peace but also the peace that comes from the awareness that we are children of God. A speech by Benedict XVI delivered fifteen years ago explains it very well.

The occasion was the traditional speech at the beginning of the year to the Holy See’s diplomatic corps. Benedict XVI had already met the diplomats for a greeting after his election. But it is in that speech of January 9, 2006, that the root of his thinking lies. It is worth re-reading that speech, as the eighth anniversary of the announcement of his resignation approaches.

Benedict XVI does not make a political speech. He delivers a theological lecture, which applies to diplomacy. He reminds the ambassadors that they and the Church are “united in a common mission,” which is the mission of peace. The Church pursues her mission by spreading Christ’s proclamation of peace, diplomats by promoting friendship between peoples.

But the key to the presentation is that of truth. Because, he said, “in today’s world, alongside appalling scenes of military conflict, open or latent, or only apparently resolved, one can observe, thank God, a courageous and tenacious effort on the part of many people and institutions in support of peace. Reflecting upon this situation, I would like to offer some thoughts by way of fraternal encouragement.”

Benedict XVI, first of all, defines the commitment to truth as the “soul of justice,” because “in international relations too, by seeking the truth one can identify the most subtle nuances of diversity, and the demands to which they give rise, and therefore also the limits to be respected and not overstepped, in protecting every legitimate interest.”

Only when diversity and equality are recognized, disagreements are “settled according to justice.” This assumption is valid in both minor and major issues, both local and international.

Therefore, says Benedict XVI, “commitment to truth establishes and strengthens the right to freedom.” Every State should guarantee freedom, starting from religious freedom, the right of all rights. But -  he explains  – “in some States, even among those who can boast centuries-old cultural traditions, freedom of religion, far from being guaranteed, is seriously violated, especially where minorities are concerned.”

Benedict XVI then underlines that “commitment to truth opens the way to forgiveness and reconciliation.” The Pope emeritus explains it is not true that truth, starting from religious freedom, causes tensions. He adds that tensions happened, but it was not because of the truth, but for concomitant situations. Even Churchmen promoted tensions, and the Church had asked for forgiveness for that.

Benedict XVI said: “Asking for forgiveness, and granting forgiveness, which is likewise an obligation – since everyone is included in the Lord’s admonition: let him or her who is without sin cast the first stone! (cf. Jn 8:7) – are indispensable elements for peace. In this way our memory is purified, our hearts are made serene, and our gaze is clearly fixed on what the truth demands if we are to cultivate thoughts of peace.”

Finally, Benedict XVI affirms that “the commitment to peace opens up new hopes” because: “The peace, to which he [man] can and must be committed, is not merely the silence of arms; it is, much more, a peace which can encourage new energies within international relations which in turn become a means of maintaining peace. But this will be the case only if they correspond to the truth about man and his dignity. Consequently one cannot speak of peace in situations where human beings are lacking even the basic necessities for living with dignity. ”

For this reason, “They cannot be said to be living in peace, even though they are not in a state of war: indeed they are defenseless victims of war. Immediately there come to mind distressing images of huge camps throughout the world of displaced persons and refugees, who are living in makeshift conditions in order to escape a worse fate, yet are still in dire need.”

Why is this speech by Benedict XVI fundamental? Because it clearly shows how the Pope Emeritus would have faced his diplomatic commitments: without being silent, but without forgetting that there was also a need to go further, to forgive. And because we note, even in Benedict XVI, a propensity to pay attention to the situation of the marginalized and the powerless, but without putting aside principles. Indeed, imbuing that attention precisely with a greater good, a superior good.

The truth, for Benedict XVI, can only be “the Truth”. And this is what had always moved his diplomatic action, even when dialogue became difficult. Not only. Benedict XVI tried to give everyone a voice.

The case of China is emblematic: the letter to Chinese Catholics in 2007 was accompanied by the decision to have Cardinal Joseph Zen, a powerful voice in favor of human rights, write the meditations for the Via Crucis on Good Friday at the Colosseum. The China Commission, which met privately, sought to address the issue of persecuted Christians, but it was also careful to show that these Christians were not abandoned.

Benedict XVI’s was a delicate diplomacy, silent but firm, strong, and rooted in the Gospel. Again, we probably did not understand Benedict XVI. Yet, it all lies in looking for the right key of interpretation. And that of Benedict XVI is always, by choice, the pursuit of truth.