Pope Francis: How Will He Defend the Legacy of St. John Paul II? Pope Francis: The Struggle behind the Curtains

The Church and the dissidents 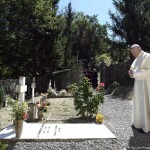 During the days in which a letter to Pope Francis by the four cardinals of the dubia was disclosed, the Pope paid a half-day visit to pray on the tombs of Fr. Primo Mazzolari and Fr. Lorenzo Milani. The Pope thus paid homage to two priests, very much ahead of their times, who were also sanctioned by the Holy Office (now the Congregation for the Doctrine of the Faith).

Who were Frs. Primo Mazzolari and Lorenzo Milani? Both of them were parish priests, who lived in similar lives in different times. The first, a strong anti-fascist, published many papers on social teaching after the Second World War, focusing in particular on the themes of non-violence and disarmament. The second, a Catholic convert from agnosticism, passed rather quickly into the priesthood. Coming from a very wealthy family, he left everything, became a priest, worked in a parish and was sent to Barbiana, a village in the Florence area, where he established a school for kids with a particular teaching method.

Both Fr. Mazzolari and Fr. Milani were investigated by the Holy Office on account of their writings. Fr. Mazzolari was forbidden to be editor of the magazine Adesso that he founded, and even to preach outside of his diocese. Fr. Milani saw one of his books, Pastoral experiences, included in the Index of Forbidden Books by the Holy Office. But both of them accepted every doctrinal decision. They never left the Church. Fr. Milani even kept asking for the backing of his bishops so that his work would not be considered a “private fact.”

One must remember that both of them lived in a time – the 1950s and 1960s – characterized by a strong pre-Second Vatican Council debate, but also by a strong social debate that will flow into the 1968 movements. And one must also consider that the Holy Office was far more severe than now: at the time, the policy was to issue a warning at once whenever a possible doctrinal drift was detected.

However, it is a fact that Fr. Milani’s and Fr. Mazolari’s obedience to the Church was never questioned.

Why, then, were they considered troubling priests? Again, because of the times they lived in. While they invited criticism of bishops and the practice of conscientious objection, every form of authority was up for discussion as a result of the pre-conciliar debate. So, Frs. Milani and Mazzolari could not avoid becoming the object of sympathy on the part of those who attacked the Church as an institution. This happened in spite of their actions, not because of them.

The culture that later developed has always been characterized by this individualistic, anti-social systemic background. This is the reason why these two priests were treated as symbols of a struggle against the social system, and hence against the Church’s hierarchy.

These are also the reasons they have been talked up by the media as “perfect dissidents.” The homage the Pope paid to them was thus interpreted as a legitimization of dissent against a “closed Church,” in favor of a more open Church.

If these forms of dissent are seen in a positive way, there are other “inconvenient” voices that do not enjoy the same sympathies. An example is given by the four cardinals of the dubia.

Whether one shares or not the way these cardinals are working to publicize their doubts and their reasons for them, it cannot be denied that they represent a case that mirrors those of Frs. Milani and Mazzolari. They are dissident because they have the courage to go beyond the mainstream, to face problems that everyone deems already solved, like that of sin and of doctrine. They have the courage to advance criticisms, but always with words of filial affection for the Pope, to whom they profess respect and obedience. By any mean, they shock a certain public opinion that is now so completely focused on social issues that it has lost sight of doctrinal issues.

Against this parallelism, it can be objected that, unlike the two Italian priests, the four cardinals behind the dubia have not been admonished by the Congregation for the Doctrine of the Faith. True. It is also true that the times have changed, and that the CDF publishes strong notifications only in grave cases involving some form of heresy. Moreover, beginning under Joseph Ratzinger as Prefect, the Congregation of the Doctrine of the Faith’s documents were always dialogical in structure, faithful to the Second Vatican Council’s model of dialogue with the world.

Beyond every objection, it seems that public opinion has accepted that there is a “good dissent” and a “bad dissent”. Good dissent is considered “leftist” and wants the Church to dialogue with the world and to employ the language of the world. Its catchphrases are those of “open Church” and “inclusive Church”, a Church “capable of reading the signs of the times.”

“Bad dissent” is the label given to anyone who wants to speak the Church’s language, to reiterate the truths of the faith and to give full consideration to doctrinal issues that are often considered secondary by many in the Church today.

However, dividing discourse into good or bad dissent means imposing on the Church a vision that comes from the world, making an a priori decision about what is good and what is not. This way every discussion is closed in on itself.

Is this happening today in the Church? Certainly, this is what one can perceive in public opinion. Public opinion is always more inclined to tell the Church what to do and how to be. Public opinion also wants to have weight in determining the Church’s internal choices, to which it is very sensitive.

Why, in fact, are ecclesiastical appointments of so much interest to the secular world? The answer is that based on who gets appointed, the secular world will perhaps be able to exercise more influence, or less, as the case may be.

It seems that in this way we are once again living the last years of St. John Paul II’s pontificate, when the issue of identity for the Catholic Church became secondary, and dialogue with the world became one of the criteria at the base of many choices, including bishops’ appointments.

Pope Francis’s pontificate can be also read as a sort of vindication of those who were at the helm at the end of St. John Paul II’s pontificate, some observers have noted. These people lost power under Pope Benedict XVI. The first Vatileaks trial is in fact an outcome of this transition of power.

How did the vindication take place? One example can be seen in Pope Francis’s decision to create Karl Jozef Rauber a cardinal. Rauber was Nuncio to Belgium, but his recommendations for the successor of Cardinal Godfried Daneels as Archbishop of Brussels were not taken into consideration: Pope Benedict chose Archbishop André Joseph Leonard, while Rauber had put at the top of his terna Jozef De Kesel. Pope Francis named De Kesel as successor of Archbishop Leonard, and he immediately got the red hat which Archbishop Leonard was denied.

Cardinal Gualtiero Bassetti, Archbishop of Perugia and the new President of the Italian Bishops’ Conference, was supposed to be the Archbishop of Florence in 2008. But Pope Benedict chose Cardinal Giuseppe Bertori instead.

These are just a couple of examples of the vindication. But the distance between these two worlds is indicated by one fact. Cardinal Betori was the one who asked that Fr. Milani’s books be taken off of the Index of Forbidden Books. Nevertheless Bertori excludes the possibility of a canonization process for Fr. Milani. Meanwhile, Cardinal Bassetti has declared that, for him, Fr. Milani is a saint. This difference of views also shows a different way to approach issues.