The Crisis of European Values and the World Order without God 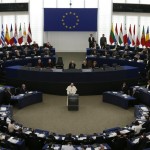 There is something prophetic in the choice of the European spiritual crisis as the topic for discussion by Benedict XVI’s former students during this year’s meeting. Benedict XVI, even as Cardinal Ratzinger before his election to the papacy, addressed this issue with in-depth analysis on multiple occasions, while he lamented the fact that Europe had lost its identity. Ratzinger, as theologian, bishop and Pope, was continually searching for a reconciliation between Enlightenment reason that refused faith and the faith that was being constantly marginalized from debate in Europe. Now that faith is considered more and more exclusively in secular terms, especially in Europe, Ratzinger’s Schuelerkreis members think that addressing the European issue is crucial. But by looking attentively, we can see that this also holds true for Pope Francis.

Pope Francis has always been characterized as the Pope of the peripheries, and this is what he constantly demonstrates. Pope Francis’ first trip to an EU member country was to Lesbos Island, in Greece, and it was not an official state visit. After that there was the trip to Poland, dedicated to the World Youth Day. The other trips in European territories did not touch EU member states. The Pope visited Albania which experienced state atheism, Sarajevo in Bosnia, a country still enduring the divisions of the Balkan war, and – if we want a wider perspective – Turkey, which is not an EU member and is still far off from a European identity. There was a trip to Strasbourg on November 25, 2014, but that trip was a visit to European institutions, and not to an EU member state. Now the Pope will go to Sweden on October 31, to commemorate the anniversary of the Lutheran Reformation: it will be his third trip to an EU member country.

Beyond that, even Pope Francis’ consistories – the upcoming one might take place already in November – are characterized by an attempt to decrease the number of Europeans within the College of Cardinals. The rationale is to make the College ever more universal and really representative of the whole globe. To Pope Francis, Eurocentrism has the character of ideological colonization.

This is what the Pope stressed in an interview with the Catholic French newspaper La Croix, explaining why he does not like to support the Christian values of Europe. On the other hand, during a meeting with Catholic-socialist politicians and philosophers gathered in the French group, La Poisson Rose, Pope Francis clearly underscored that every hope for the unity of humanity comes from Europe, because – the Pope said – Europe has a greater vocation for universality and unity than that of other continents.

It can surprise – but it should not – that the search for a European vocation becomes strong again under a South American Pope, hailing from a country subjected to European ideological colonization – as explained by the Van Thuan International Observatory in a 2012 case history about Argentina on “the colonization of the human being,”

Members of Ratzinger Schuelerkreis felt this call to discuss Europe. And the call came after last year’s meeting, dedicated to how to talk about God, and after the 2013 meeting about the eclipse of God in history: the continuity between the two meetings seems to be prophetic, as the current European issue is that religion is considered according to secular criteria, as a tool of government, rather than as a seed to make society flourish.

In the end, religions are considered useful when State can use the links between people of faith to tackle emergencies. At the same time, religions are pushed aside if the religious beliefs create such an awareness that help people to put up for debate, if not to oppose, State decisions.

This is one of the issues on the table. This in-depth reasoning was given by Benedict XVI. Talking about Europe, Benedict XVI is known for his books addressing the lack of European identity, his speeches warning about the eclipse of God from history, his lecture at the College des Bernardins in France, that identified in the monastic vocation quaerere Deum (search for God) the seeds of European culture. Perhaps, the real roots of his thought about the European Union can be traced back to April 1, 2005, in a lecture he delivered at Subiaco on the very eve of St. John Paul II’s death.

In his lecture on “Europe among the crisis of the cultures,” the Cardinal, who was going to be elected Benedict XVI, noted that “it is true that nowadays there is a new moralism whose key words are justice, peace, and the preservation of creation… words that recall essential moral values we really need. This moralism, however, remains vague, and almost inevitably shifts to the political-party arena. It is above all a claim addressed to others, while it is too little a personal duty of our daily life.”

Benedict XVI’s reasoning is crystal clear. There was a Christian Europe, and out of this Christian Europe came the basis of Western rationality. But this rationality turned into the worship of Reason, then propagated by Enlightenment philosophy. This “illuminist culture is substantially framed by rights of freedom; it starts from freedom as a fundamental value, the measure of everything; the freedom of religious choice, that includes the State’s religious neutrality; the freedom of expressing everyone’s opinion, under the condition that this freedom does not doubt about the freedom of opinion itself; the State’s democratic rule, that is parliament’s control over State bodies; the free establishment of parties; the independence of judges; and in the end the safeguarding of human rights and the prohibition of discrimination. In this last case, the ‘canon’ is still being shaped, as there are also human rights that are in contrast with others, as for the example the contrast between the wish for women’s freedom and the right to life of the unborn baby.”

Ratzinger also noted that “the notion of discrimination is ever more enlarged, and thus the prohibition of discrimination might always turn into a limitation of the freedom of opinion and of religious freedom. Soon, it will not be possible to affirm that homosexuality, as the Catholic Church teaches, is an objective disorder in human existence. And even the fact that the Church is convinced that it is not her right to permit women’s ordination to the priesthood is considered by some people as a principle irreconcilable with the spirit of European constitution.”

Even though this lecture dates back to 2005, these issues are dramatically current. Not only abortion, but also euthanasia – to be provided also to minors – have become ineluctable dogmas for the secularized world. The Catholic Church’s right to express its thoughts on issues proper to itself is not even recognized. It is enough to think about the discussion which arose concerning the “divorced and remarried” issue outside of the Catholic environment, as if Communion were a right to be guaranteed to everyone, and not a sacrament. And it is enough to think about reports of the UN Committees on the Convention for the Rights of the Child and on the Convention on Torture that in some cases even asked the Catholic Church to change Canon Law.

The Church, in the end, is considered more and more as one of the many organization within the State that must be subjected to the State. Public opinion is not a criterion of judgment, but it is rather the lever through which the State attempts to make the Church change doctrine. This transition is not a trivial, and it is not about the discipline of religion. It is rather a tout court attack on religion.

Even this attack has deep historical roots. Joseph H. H. Weiler, President of the European University Institute, has been one of the Ratzinger Schuelerkreis lecturers. He cares very much about the topic: a Jew, he defended the crucifix in Italian classrooms before the High Court in Strasbourg back in 2010.

His lecture at Ratzinger’s Schuelerkreis took its cues from the question Pope Francis raised in his acceptance speech of the Charlemagne Prize: “Europe, what has happened to you?”

Weiler noted that the preamble of the draft of the Constitution reads that it “drew inspiration from the cultural, religious and humanist inheritance of Europe”, and this inheritance is said to come from the gradual development of “values underlying humanism: equality of persons, freedom, and respect for reason.”

This point leads to the deduction – professor Weiler argued – that “respect for reason” is part “of the humanist inheritance,” and not something one would associate with religion – and of course religion in Europe means mostly Christianity or at best the Judeo-Christian tradition.”

“The European laique move – Weiler said – is not simply one of consigning religion to the private sphere where, of course, it will be protected as part of our noble and indispensable commitment to freedom of conscience. It is a banishment from the public sphere of something which ought not to be there – a public sphere which is committed to respect for reason.”

Is religion really about irrationality and nonsense? No, Benedict XVI would answer. Fr. Stephan Horn, Coordinator of the Ratzinger Schuelerkreis, said in an interview with ACI Stampa that “Benedict XVI does not think about a political theology. He rather thinks that politics, and hence the decision of governments, must have an ethical foundation. This is the big challenge of the Church, and of faith: that of providing an ethical foundation to politicians.”

In the end – Fr. Horn said – “Benedict XVI deems that even the secular world can accept the faith arguments, as faith carries with it truth and thus it helps to know the ethical truth. For this reason, Benedict XVI thinks that faith can save politics through this ethical foundation. And with faith even philosophy is saved, as philosophical thought has been reduced too much to concrete, pragmatic stuff, and not to big challenges.”

The great challenge is that of creating new thought to counter the secularization of religions. This new thought should set its gaze far, and go beyond utilitarianism. Cardinal Angelo Bagnasco, President of the Italian Bishops conference, addressed the issue on August 10, in a homily for Mass for the Feast of St. Laurence. The Cardinal noted that “even today, Christians experience martyrdom,” not only in the bloody ‘classical’ way, but also in new forms, “refined, but not less cruel; legalized, but not less unjust.” Cardinal Bagnasco pointed his finger at Europe that “considers Christianity as divisive” and at the world that “in the name of values like equality, tolerance and rights” claims to “marginalize Christianity” and establish “a world order without God.”

In the end, a world without God will not help to overcome divisions and discrimination. A world based on pragmatic issues, with no vision, cannot. A world in which faith is accepted, recognized and even encouraged can. Probably, only Europe can give rise to a movement of unity, faith exaltation, to the building of a world where the human being is free to consider himself a son of God and then a brother. Europe, in the end, is still the cradle of civilization. The European world still makes a cultural impact on the rest of the world. Europe can still provide the keys for a more united world.

Pope Francis believes this. As he also believes in the need of a world that constantly refers to God. Despite Pope Francis’s verbal timidity and doctrinal uncertainties in approaching non-believers, a diplomacy based on the dialogue of religions is being developed. Pope Francis’s diplomacy, until now, has been above all a diplomacy of prayer. Now a quality leap forward is needed.

Speaking in Prague in 2009, Pope Benedict XVI stressed that Christians have turned into a creative minority. It is still true. As a Christian minority, the Christian world is now called to find new solutions to respond to European challenges. We need a less worldly Church, Benedict XVI used to say. Pope Francis has taken over this challenge, though in his own way.