The Eclipse of God. Ratzinger’s Students to Address How to Overcome it. 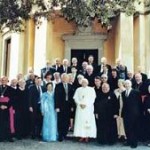 For the first time since 1977, Pope Benedict XVI will not take part in the annual meeting of his former students. To them, he explained that «as Pope Emeritus, I intended not to take part in public events.» And so he will not be at the Ratzinger’s Schulerkreis meeting. The gathering (to be held Aug 29 – Sep. 2) will take place without the beloved professor.

However, the beloved professor did not abandon them. He showed them the way. Fr. Stephan Horn, the president of the Schuelerkreis, met with Benedict at the beginning of June at the Vatican monastery where the Pope Emeritus resides. Pope Benedict confirmed to him that he would not take part in the Schulerkreis gathering. But he chose the theme for the meeting: «The question of God against the background of secularization.» He also chose the guest speaker: Remi Brague, a French theologian awarded last year with the Ratzinger Prize for Theology.

The theme is typically Benedict XVI’s. Since he was ordained priest, Joseph Ratzinger has reflected about the question of God against the background of secularization. As vice parish priest of the Church of the Most Precious Blood, Joseph Ratzinger listened to confessions very often.  He was ever more aware that there was a new paganism rising, that of people who called themselves Christians but were not, and lived as pagans. He wrote a book about it, «New Pagans and the Church.»

Looking back at that book can explain all of Benedict XVI’s work, from that of an intellectual and a theologian, passing through the years as bishop and then prefect of the Congregation for the Doctrine of the Faith, to shepherd of the Universal Church.

Pope Benedict XVI often admonished about the eclipse of God. He did so, quoting Isaiah, in November 27, 2011, the first Sunday of Advent: «No one invokes your name, or makes an effort to take hold of you. For you have rejected us and handed us over to our own sins.» Benedict XVI cried out loud and with angst about the present times, and about a world of «anonymous cities» where «God seems to be absent, and the human being the only master, as if he were the author and maker of everything.»

It is in these cities where men may experience a sense of abandonment by God. In such a world that «seems almost perfect,» later on «disconcerting things occur, in nature or in society, and we think that God is something like retired, that He has in some way abandoned us to our own fate. In fact, the true master of the world is not man, but God.»

These themes have always been pivotal to Ratzinger’s thought. A major focus of his reflections is about a Europe that has put aside its identity and its faith. A Europe that must come to terms with this moral crisis, before its economic crisis. The Saturday before his lamenting cry, Benedict XVI had met with the plenary assembly of the Pontifical Council for the Laity. There, he underlined that «sometimes we have worked for a more incisive presence of Christians in society, in politics and economics, but perhaps we have not paid equal attention to the solidity of their faith.»

Benedict XVI has always called for «authentic Christians,» and this is why, in Germany in September, 2011, and in October, 2011 in Assisi, the Pope praised «agnostics for whom the question of God leave them unease, and are thus closer to the Kingdom of God than routine believers.» In essence, Benedict XVI was calling for a freer Church to believe in God.

Joseph Ratzinger’s students are well aware of all of this. They will nevertheless miss their mentor. As recalled by Fr. Joseph Fessio, publisher and founder of the Ignatius Press and one of the members of Schuelerkreis, Ratzinger had in every meeting «something new to say, something nobody had ever thought about before.»

Remi Brague should be well placed, however, to give the discussion the required historical-critical-rational background.

Historian, medievalist and an expert on the history of Religions, Brague was the first to contrast secularity with secularism. «The advocates of secularity – he stated in an interview posted at the digital commons OpenDemocracy – specifically want to, or pretend, ignore that it appeared in the Middle Ages, a period that was emphatically not secularist.» Brague added: «The dividing line drawn between the Church and the State is a Christian invention that began among the Church Fathers, as a reaction against Constantine’s claim to control the Church and further culminated in medieval times.» Moreover, Brague asserts –  «this line was drawn by the Church, not by the State. The Holy See’s constant policy from the Investiture Controversy in the late 11th century consisted in sending the State (i.e. the Emperor or the Kings) back to its own merely this worldly—“secular” if you want—task: enforcing peace, justice, good social order. The State, on the other hand, was not “secular”, but claimed its share in sacrality. Secularity was a conquest of the Church.»

Brague turns to etymology to explain the difference between secularity and secularism. «Secular comes from saeculum, the Latin for “century”, which originally meant the longest duration of human life. Secularity is the attitude of people who think that human hopes can’t exceed one century and therefore—perhaps unwittingly and unwillingly—act so that mankind will last exactly as long… Secularists are unable to explain why it is good that there should be human beings on earth. Since they contend that human life is the product of chance, they can’t tell us why it should be good for us, who can decide consciously to carry on with the experience, to do so.»

These will be the foundations for what should be a lively debate. Maybe a part of this debate will also take place at the Mater Ecclesiae monastery. Because, while it is true that Benedict XVI will not take part in public events, he will probably celebrate the final Mass with his former pupils. In last years’ homily, he launched the idea that truth «cannot be possessed» and the Schulerkreis meeting gave impetus to the ecumenical relationships with Lutherans and the Orthodox. Perhaps the Schuelerkreis meeting this year will show the way to overcome the eclipse of God.

One Response to The Eclipse of God. Ratzinger’s Students to Address How to Overcome it.