The fall of the false gods. International finance between Christ and Confucius Spain, an evangelical World Youth Day. On the ruins of World Economy.

The Holy See toward financial transparency. With some contraindication. 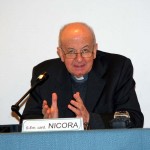 Within the next 4th of September, the Vatican Authority for Financial Information will be finishing a report to deliver to the GAFI – the International Financial Action Group against money laundering – and to the financial organisms of European Union. It will be one of the steps toward the enrollment of the Holy See in the «White List», the list of states most active in preventing and fighting the financial crimes.

In fact, there are still several steps to do. The Authority for Financial Information was created as the Vatican issued new laws to fight money laundering and terrorist financing in a major effort to comply with EU norms and shed its image as a tax haven mired in secrecy and scandal. The Vatican had pledged to pass such legislation by when it entered into a monetary agreement with the EU in December 2009. It is commonly thought that the effort went into high gear following the money laundering probe at the Vatican bank, which greatly embarrassed the Vatican and its bank chairman, economist Ettore Gotti Tedeschi. Actually, the steps were already ready to be done. But, after the laundering probe, everything has been presented – even by media – as part of the Gotti Tedeschi’s effort for transparency, and this annoyed the former president of the Ior, Angelo Caloia.

Cardinal Attilio Nicora had been nominated president of the Authority for Financial Information.  For a few months, Nicora also remained president of the Administration of the Patrimony of the Apostolic See, a sort of Vatican Central Bank. But there had been questions about possible conflicts of interests, given Nicora’s dual roles.  In May, a Dutch liberal member of the European Parliament, Sophie in ‘t Veld, formally asked the European Commission to look into whether the Vatican’s financial authority can be truly independent given Nicora’s jobs and whether there wasn’t a conflict of interest. So, Nicora asked to be relieved of his administration job to focus exclusively on the financial authority, and Pope Benedict XVI agreed.

In fact, Nicora’s job is not that easy. Inside the Authority of Finacial Information, there are two different points of view on how to procede to be enrolled in the ‘white list’. The first one is carried out by Ettore Gotti Tedeschi, president of the Ior (Institute for Religious Works) and his ‘disciples’. Marcello Condemi was the attorney who wrote great part of the new legislation for the prevention and countering of illegal activities in the financial and monetary sectors. Francesco De Pasquale, lawyer, has been appointed director of the Authority for Financial Information. They had both been backed by Ettore Gotti Tedeschi, and they share with the president of the Ior the aim to show the Holy See the most transparent they can. Even if the Authority for Financial Information is to control the Ior itself. Even if the Prefecture for Economic affairs – soon there will be a new prefect – has itself the charge to monitor Vatican’s financial movements.

On September 30, Gotti Tedeschi agreed to be questioned by the magistrates of Rome, like any Italian person of interest. His deposition filled 91 pages of transcripts, portions of which were leaked to the press. Gotti Tedeschi explained his action as «a demonstration of the desire to comply with a new era».

This new era was not free from complaints within he Vatican walls.  In 1993, when he was called for questioning by the magistrature of Milan, the president of the IOR at the time, Angelo Caloia, got the magistrates to submit a request internationally, with the request forwarded through diplomatic channels to the Holy See as a foreign state. In 2010, many within the Vatican would have reacted in the same way, but Gotti Tedeschi’s line prevailed.

Holy See is a State with its own sovereignty. Every single country can use its money at his personal discretion. If a country wants – through diplomatic channels – secretly finance any sort of organism or association, no one has the right to control the money they transfer. The same can do Holy See. One of the strong points of the accusation on Wojtyla beatification was brought on the basis of the money Wojtyla and his entourage would eventually send to Solidarnosc. A Vatican official – who wants to remain anonymous – explains that «this is part of the mission of the Church. The Church is free to use its money in the way is believed more proper, in order to help the populations to set free from the oppression or to help Christian communities wherever in the world».

The risk for the Holy See is to renounce to part of its sovereignty to respond to GAFI’s requests in order to enter in the White List. Holy See commitment has – until now – been higher than the one of any other State. When the Holy See will be enrolled in the White Lists – the Vatican official says –  it will commit itself to make its peculiar moral impact weigh on the World financial organisms. On the other hand, it has to watch out for not being considered on a par of a Ngo Organization, with the duty to give the complete accountability of their sources of money and the way they use their money.

From 1999, the non-governmental organization, Catholics for Choice, lobbied against the participation of the Holy See in the United Nations, arguing that the Holy See is a religious organization and not a state, and that, therefore, it should not have the right to participate, in a position analogous to that of states, in the intergovernmental decision-making process on social, cultural and economic matters. No State supported this initiative. On the contrary, the United Nations General Assembly confirmed further its observer status within the UN, through its Resolution 58/314 of 16 July 2004. Through that resolution, all Member States of the United Nations decided to confirm to the Holy See its status as a Permanent Observer State of the United Nations and to grant it all the rights of full membership except the rights to vote and to present candidates.

Currently, the Holy See has the right to participate in the general debate of the General Assembly and to intervene in the discussion of any issue inscribed in the agenda of that assembly. It has the right to participate in all meetings open to all Member States, the right to make points of order and to exercise the right of reply, the right to circulate proposals and position papers as official documents, and the right to co-sponsor draft resolutions and decisions. Commenting on that resolution, Archbishop Celestino Migliore, the then Holy See Permanent Observer to the United Nations, said: «We have no vote because this is our choice». He added that the Holy See considers that its current status «is a fundamental step that does not close any path for the future. The Holy See has the requirements defined by the UN statute to be a member state and, if in the future it wished to be so, this resolution would not impede it from requesting it».

When the Permanent Observer of the Holy See speaks in the General Assembly, everybody is silent. The statements of the Holy See are took in great consideration. Its international status is prestigious. The Holy See took advantage of the prerogatives of its observer status to incorporate Christian values within the decisions and recommendations of the United Nations. Notable were its successful efforts, in cooperation with like-minded countries, to ensure the adoption of a Nations Declaration banning all forms of Human Cloning and to prevent the adoption of a proposed resolution on sexual orientation and gender identity.

Now, the Holy See’s international prestige is trying to be undermined. And the request for transparence can be – for many inside the Vatican – the first step to make of the Holy See an organization on a par of a Ngo. Was not this the Economist asked in 2007?