The Pope, black and white 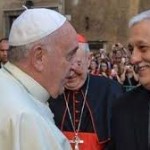 Faith and intellectual depth: these are the two key words provided by Fr. Arturo Sosa, elected General Superior of the Society of Jesus, These keywords epitomize the character of the Jesuits, and will weigh on the new General’s formulation of the guidelines of his mandate. The General Congregation that elected Fr. Sosa, in fact, is still meeting. However, these two key words reveal the strong stance that the new General is taking.

A meaningful stance, as the General of the Jesuits is called the “Black Pope”, because his term of office lasts for the remainder of his life, and because he has unlimited powers, like the Pope. But it is the first time that the “Black Pope” has been elected while the “White Pope” is also a spiritual son of St. Ignatius.

Pope Francis is profoundly a Jesuit when he talks about corruption, discernment of the spirits and the “Holy Hierarchical Mother Church”. On the other hand, Jesuits are not necessarily “Bergoglian”. It is rather the contrary. The fact that the new General – the first coming from South America – identified in intellectual depth a cornerstone of the Jesuit mission can be interpreted as a choice not to follow Pope Francis in his positions.

Since the beginning of his pontificate, Pope Francis noted that theologians should be put aside. His thought is expressed when he says that “ecumenism is accomplished in the walking” or when he speaks – he did in his first Angelus as Pope – of the old woman who was more able to understand mercy than was a professor of the Gregorian university.

Pope Francis is characterized by a strong notion of “people” that comes from his pastoral experience together with his closeness to the “theology of people”. “The whole is more than the parts” and “realities are greater than ideas” are two of the four dimensions which Pope Francis outlines in the Apostolic Exhortation, “Evangelii Gaudium,” which is the de facto program of his pontificate. These two expressions can be translated this way: whatever the Pope believes is more than what has been designed by a creative minority; and what the people put into practice is more than any ideal.

Pope Francis always put in practice those two concepts, generating some controversy among those who try to interpret his thought. These two concepts are also a counter-tendency with regard to the work of all religious congregations, and the Jesuits in particular.

Religious congregations have always focused on education – that kind of profound and top-class education, able to create not armies, but rather creative minorities who are able to lead and shape society according to Christian teaching.

Jesuits have been particularly skilled in this. Born in the period of the Counter Reformation, Jesuits immediately understood that the future of Christianity was based in education. They accepted the challenge, establishing schools, issuing publications and creating that model of “integral human development” that the social teaching of the Church later theorized. That model of development was based on knowlegde and pursuit of talents, whose biggest and extraordinary application were the reducciones, the mission in Latin America. In those reducciones, Jesuits taught indigenous people to live and create communities and also to be part of the market. This work broke the slavery system practiced on indigenous people, and it was because of this that Jesuits were persecuted by States, and that the Society of Jesus was suppressed.

When the Society of Jesus was reconstituted, Jesuits kept their commitment to culture, combined with their desire to be close to the poorest. This desire brought Jesuits to flirt with liberation theology. Not even Fr. Arturo Sosa was exempt from this temptation: he is a political analyst, and in his writings he proved to support to the ideal of the liberation of peoples while employing socio-economical criteria to do so.

However, Fr. Sosa’s thought evolved, and this was noted during the press conference he held after his election.

“Whoever has faith in Jesus – Fr. Sosa said – is a person able to hope, inviting us to do what we hope. When someone works as an analyst, and when you make an analysis of the historical situation of the world, you feel economic, military powers as well as the narco-traffickers and human trafficking so strongly that you think you can never beat them. But we have another leg, that is, intellectual depth. If we do not understand what we see, if we do not search to go in-depth by means of scientific, cultural, and personal data, if we are not able to think and put into practice at the same time, if we do not think about what we are doing, it is not possible that the impossible happens. The Society of Jesus invests much energy and time in intellectual work, and this investment is not done just in order to fill the walls of our academies.”

To cut a long story short, Fr. Sosa centered all reasoning on Jesus Christ, making that shift from Catholic social thought needed to purify liberation theology and to re-center everything on Christ. And then Fr. Sosa linked this need to center on Christ with the topic of education.

This is how the “Black Pope” seems to act as a natural counterpart of the “White Pope.” On one hand, we have Jorge Mario Bergolio, his “pueblo” and his simple, straightforward and sometimes controversial way of speaking. On the other hand, there is Fr. Arturo Sosa, a Jesuit who comes from a political science background, whose apparent fate will be that of moving the Society of Jesus toward new educational frontlines with its gaze set on Jesus.

Can we assume they are the opposite of each other? Certainly not. Both the White Pope and the Black Pope are two faces of the same coin. It is, however. noteworthy that Pope Francis benefits a lot from the work done by religious congregations. Their work is rooted in society, and goes beyond any superficial expression the Pope or the hierarchy might ever utter.

It goes without saying, there are not just the Jesuits. Other congregations work for the Church and along with the Pope, helping him to get out of difficult situations and supporting his views with long-term projects.

The next Synod of Bishops, for example, will be dedicated to young people and education, and the Salesians are already ready to be on the frontline. Salesians themselves are working on a big congress on the family in Madrid, prepared as if it were a Synod with the rationale to return to the discussion that divided the Church during the 2014 and 2015 Synods.

There are many other examples: Dominicans held classes on Islam in Bologna already back in 1992. The Stigmatine Fathers in the Republic of Georgia work a lot on doctrinal awareness, and so do Scolpian father recently main characters of a Congress on Educaation held in the Vatican.

So, the Black Pope choice is on the track of a general line religious congregations are following. And this line deals with education and the creation of a creative minority able to shape the world, and not to be adapted to it.

What about Pope Francis? He cannot do more than observing and applauding to this movement around him. However, seen from outside, the Pope seems to be a little isolated. His government choices, even his pastoral choices, are a little absorbed by this cultural commitment that is to some extent on the opposite side to him, at least considering the profile of new bishops – that is Pope Francis’ real reform.

This apparent polarization is thus part of that “schism” within the Church that is taking place with Pope Francis, even though it had been observed long before. On one hand, the Pope, with his declarations, choices, guidenlines. On the other hand, on the ground, religious congregations, parish priests, theologians. That is a minority in society that is working for the Church’s sake. As there is a hidden Vatican, there is also a hidden Church, very active on social issues as well as strong in proclaiming its ideal.

With his declarations, fr. Sosa in the end shed light on this hidden Church. In the end, Jesuits vocation has always ben that of creating culture. The Black Pope that hails from South America reiterated it. And the Pope that come from South America acconsented to this. In the end, it cannot be considered a contrast, as the Jesuits will always be on the Pope’s side. But it is noteworthy the Jesuits took their stance, for a long term decision. Their work will be then fundamental to create the future Church.