The Pope’s diplomacy, serving the world 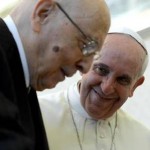 That the common good is at the center of the Holy See international agenda has been proven once again. This time, in the book «La diplomazia pontificia in un mondo globalizzato» (Pontifical Diplomacy in a Globalized World), a selection of the diplomatic interventions of Cardinal Tarcisio Bertone during his seven years as Secretary of State. In more than 600 pages, not only Bertone’s work, but also Benedict XVI vision of diplomacy are outlined. While presenting the book on November 12, Dominique Mamberti, Vatican Secretary for Relations with States, underlined that during Benedict’s pontificate, reason as the foundation of truth became another connecting thread, together with the traditional threads of peace-building and fighting poverty, running through Vatican diplomacy.

The book by Cardinal Bertone could be readily seen as a selection of speeches on reason. In the many speeches delivered during trips, honoris causa academic ceremonies or in meetings with the diplomatic corps and with civil society, Cardinal Bertone was transmitting Benedict XVI’s thought. The book contains observations about the «duty of humanitarian intervention» and the call for new, strong and active international governance.  These represent a development of the traditional Holy See diplomatic battles to achieve to common good.

Under Benedict XVI, while Cardinal Bertone was Secretary of State, the Holy See became ever more international. For centuries the Holy See has had an international impact. It was part of peace processes all over the world, from the negotiations over the Caroline Islands to those concerning the Beagle Channel. The member states of the United Nation has asked many times the Holy See to raise its status from permanent observer (yet with enhanced privileges) to member state. The Holy See’s moral authority was so highly regarded that the international community asked that it be among the founding states of the International Atomic Energy Agency, in order to provide the agency with a moral voice.

Despite its international activity, the Holy See had been considered for years a sort a small enclave of Italy. Italy and the Holy See have always enjoyed good neighborly relations, and Italian Popes have paid particular attention to events in Italy.

But the special relation between Italy and the Holy See has also brought some trouble. For example, every recent financial scandal (from the IOR-Ambrosiano scandal to the path toward financial transparency started under Benedict XVI) involved Italians, men of compromise whose specialty is the Vatican-Italian dichotomy and border, and able to nurture that all-important good relation.

By bringing these questions to the fore, Benedict XVI also set forth a more ambitious projection for the international profile of the Holy See. The Holy See could no longer be considered a sort of Italian annex, even if the Holy See and Italy still have good neighborly relations. The Holy See is a sovereign State that supports and engages in multilateral policymaking among States, and implements it. It does not live in Italy’s shadow.

From the other side of the border, Italians kept on showing interest and consideration toward the Holy See, while also paying attention to shielding themselves from ethical considerations that could run counter to their political stances.  They could not attack Benedict XVI directly, since he spoke loud and clear, and no one dared to appear as opposing him. When there are important issues to discuss, it is difficult to escape one’s own responsibilities. For this reason, attacks against the Church’s stances took the form of guerrilla warfare.

Leaks about the Holy See’s internal debate concerning the path to financial transparency came from Italy. Also Vatileaks was a genuinely Italian scandal, full of personal attacks against Cardinal Bertone. The attacks were in fact meant to reach Benedict XVI. But how could anyone attack an undisputed moral authority who put together speeches as grandiose as cathedrals, with bricks of reason?

This was the background when Benedict XVI went to the Palace of Quirinale to visit the President of the Italian Republic Giorgio Napolitano, on October 4, 2008. In that occasion, Napolitano underscored that «the laity of the state stands side by side with the recognition of the public dimension of religion,» and also noted that, in times of crisis, Italy could count on the Pope’s words and on the committed work of the «Catholic lay movements inspired by the Pope’s message.»

Catholic lay movements were not even mentioned in the speech Napolitano delivered on November 14, 2013, when Pope Francis went to visit him. In the speech, Napolitano asserted that the Church must carry forward a joint effort with Italy, in which Catholic institutions contribute with the their work on the fields of education and solidarity.

Reading between the lines, Napolitano words seemingly aim to reduce the role of the Church in society to that of a simple NGO, as many campaigns claim that the Church should be regarded.

These campaigns fail to realize that the Holy See’s sovereignty permits the Church to be free, not to be submitted to any other state, and thus to promote the right of all the faithful to live their own religion.

In Italy, the Church’s global role to protect religions and minorities have been often reduced to a mere debate about spheres of influence.

This is probably the reason why an ambassador to the Holy See exulted in an informal chat with journalists that «non-negotiable values are not the center of this Pope’s preaching,» while Napolitano praised the Pope’s «non-dogmatism.»

Ultimately, these are minor pronouncements. Pope Francis has shown that he knows about non-negotiable values, and how to defend them, even when underlying that he does not want to make them the center of his pontificate.

Perhaps, the Church did lose a little bit of traction in rising to the challenges of the world.

Meanwhile, Italy remains too embroiled in small and narrow-minded relations with the Holy See. So much so, that it risks to be treated by the Holy See just as any other state, losing the privileged connection Italy always had. But Italy cannot accept this. And so, some in Italy focus on the lay love for the Pope to break free for old linkages, even by underlying the simplified protocol used for Francis’ visit to the Quirinale.