Pope Francis, phase two of his diplomacy Synod of Bishops, hope in the peripheries 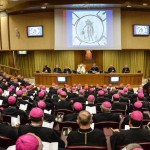 Pope Francis gave a very clear indication of the method the synod should follow: bishops should speak frankly. Without any reverential fear. Even without being afraid of not coinciding with the Pope’s own opinion. The synodal fathers, instead, have opted for confidentiality. Cardinal Lorenzo Baldisseri, General Secretary of the Synod, warned them, «You can speak with whomever you want, but your texts are the synod’s property.» One bishop underlined that «we also had to commit to keep the discussion confidential. We can speak about the topics we have addressed during the assembly, and also give our impressions, but we cannot give out the names of the people who have spoken.»

This is the reason why very little is known about the discussions in the synod. Reading the media, it seems the synod is a sort of referendum on Catholic divorce, or at least on the access to Communion for divorced remarried. The temptation to divide in categories (progressives against conservatives) is quite strong. Left in the about discussions in the synod, the media looks for contrasts that, it seems, bear no correspondence to what is actually taking place in the Synodal Hall.

What is reportedly happening in the synodal hall sometimes even includes boring discussions. Before Tuesday, when the topic of difficult pastoral situations broke and brought the discussion to divorced remarried and eventual paths of penance for them, good part of the bishops have spoken – the Holy See Press Office reported – about a change of paradigm on communications. The Church must not follow the world’s approaches to family issues. It must rather be proactively responding, promoting positive models of Catholic families, shedding light on the beauty of Catholic ways of being family. Furthermore, the Church should stop using an offensive vocabulary. Instead of speaking about “sin” with respect to divorced remarried or «intrinsic disorder» with regards to homosexual couples, the Church should present its teaching in a more purposeful way. More Gospel, less natural law. But more Gospel told in a more convincing and captivating way.

In the background, one can read the eternal debate about a Church that must spread a message and the way the Church presents this message to the world. Reading the signs of the times has been for a long time a topic of discussion. Even the synod on the New Evangelization shed light on the need to form priests in giving homilies, so that they be able to tell the Christian message to the world with a modern vocabulary. It is nothing new, in the end.

There is indeed the challenge of how to present the truth of the Gospel. It is difficult to hide truth behind «politically correct» language. Perhaps it is time that the responsibility of coming up with the vocabulary for the message be assigned to the marketing experts, rather than the bishops – provided that marketing must really be part of the way the Church communicates already. And perhaps it is time for bishops to return to the heart of the Gospel.

A long-serving missionary, Father Piero Gheddo, has been raising this issue for a long time. The impact of missionaries – he says – have lost traction because they lost sight of the heart of the Gospel’s message. It is as if Christianity has given up on shaping the world, and is instead being shaped by the world. This topic should enter vigorously in the bishops’ discussions – and it had to be, given the issues Synod’s working document raised.

Until now, the media has somewhat led the discussion on the family. The absence of any texts on the interventions of the synodal fathers, the impossibility of knowing who said what, undermines rather than stimulates the discussions. It is then easy for the media to take the lead of the conversation.

This is how the issue of communion for divorced remarried – a marginal issue, according also to Cardinal Kasper who put the issue on the table – has become the main topic of the media coverage. A coverage that is building the interest of the synod of bishops about it. Perhaps, losing sight of a very important point in the process.

The point that the crisis of the family represents the crisis of Catholicism. Paul VI forecasted this crisis, and tried to stop it with the encyclical “Humanae Vitae,” not by chance the last encyclical of his pontificate – even though the pontificate went on for another 10 years. John Paul II understood and fought with all of his strength this crisis, dedicating to the family a synod in 1980, an apostolic exhortation and numerous interventions. Benedict XVI lucidly analyzed this crisis, and addressed it in international spheres, informed by the exemplary Christian family in which he was raised, and which made him the man he is, so serene and calm in his relation with himself and God to be the first pontiff of the modern era to resign. This same crisis that Pope Francis rightly identified as a central issue.

The crisis of the family went hand in hand with the secularization of countries. Natural law was undermined by individualism, and this individualism has pervaded society. When, facing international crises, the Holy See diplomacy underscores there is a need for a “supplement of solidarity,” it is in fact trying to recreate that social environment which is conducive to the common good – the center of all of the Church’s activity – in order to foster a new kind of development.

Perhaps Pope Francis’ prophecy lies in his understanding that the family must be put at the center of the debate again.

However, until now, the synod seems to have focused on practical issues, more than on universal principles. For example, there was discussion about how to speed up the procedures to get marriages’ declarations of nullity – about which the Pope has established a special commission to study it. As if the synodal fathers were not conscious that a just and better society can only be built from truth irradiated on society.

It is easy for the media to dwell into and make use of this narrative. Since not even texts are made available, bishops are barely accountable for their words. That the synodal debate is described as “lively, animated, serene” seems to indicate mostly a debate during which no-one takes a stance, afraid of the way his position may be reported.

Just as there had been a Second Vatican Council of the media and a real Second Vatican Council, now there is a synod of media and a real synod. It is enough to read the “Relatio pre disceptationem” by Cardinal Petr Erdo, general rapporteur of the synod, to get an idea of the synthesis that synodal fathers are trying to reach. A real masterpiece balancing different positions, the synthesis underscores there cannot be derogations of the truth, but it also stresses pastoral attention and sheds light to all the nuances of the debate. In the end, the Relatio concludes making an appeal to have “Humanae Vitae,” the encyclical of the soon-to-be-beatified Paul VI’s that was so heavily attacked, reread in a positive light.

Yet, the relatio has been summarized by the media as a “yes to divorced remarried” and a “no to same-sex unions”. As if these were the center of the discussion. The media is playing out the contrasts, and obviously also being informed by those among the synodal fathers who are best in dealing with the media to gain the support of public opinion.

Certainly, this is not what Pope Francis wanted. He favors having discussions and raising issues. So much so, that the next Oct. 20 consistory will not only be able to vote on the cause of saints – as it was expected – but will also serve to have a broad discussion on the situation in the Middle East, following the meeting of nuncios held in the Vatican Oct. 2-4.

The risk is that of making of the synod more than what it is, by describing it in political terms which are alien to it; presenting it as a struggle that in fact is lost in nuances; or by expecting changes to the doctrine.

These are false expectations. The synod is a consultative body, not a deliberative one. It does not decide on doctrine. On the other hand, the reform of the synod stretches back decades. A reform of the synod was needed to make its discussions more effective. Joseph Ratzinger had spoken about a possible reform at the 1985 extraordinary synod. On that occasion, he stressed the need to make of the synod a really free exchange of ideas, in order to effectively support the Pope. Pope Francis himself is in fact looking for that free exchange of opinions he needs to keep on re-building the Church on the foundations laid by his predecessor. The synod is less than what is expected it to be. But it can be more than what it is currently.